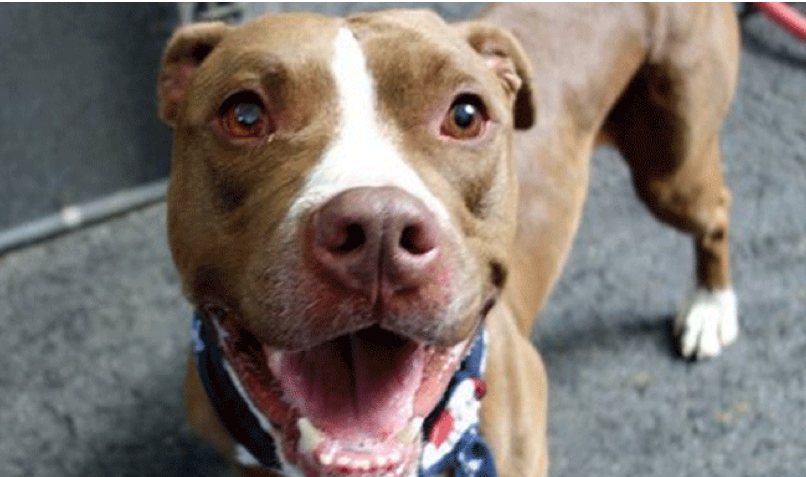 Best Friends advocates for Pit Bulls and runs an adoption center at the Northeast Valley Animal Shelter under an agreement with the City of Los Angeles that it will maintain dogs and cats taken from the LA Animal Services' shelters at the facility.

The Commission appeal was a request to overturn the decision of an Animal Services’ hearing officer that the Pit Bull, named Fancy, was a dangerous animal.

During testimony at the hearing, it was revealed that Fancy had escaped three times from the Pavone’s Granada Hills home and had been involved in at least two incidents involving conflict with another dog. The most recent was Haley, the small honey-colored Chihuahua who belonged to neighbors on the next block, Joseph and Katherine Lula. Mr. Lula was walking with Haley when she was attacked by Fancy and killed.

Mr. Pavone stated that Fancy had gotten out of their yard three times. She escaped when they had friends over and the door was not immediately closed. On the other occasion, his nephew didn’t close their gate latch tightly.

Mr. Pavone said they had "never had a dog like this," and he did not want Fancy back. He was appealing the fact that the dog-license revocation for a dangerous dog also includes a three-year prohibition from owning another dog. Mr. Pavone contended passionately that LA Animal Services did not inform Best Friends that Fancy had a history of aggression and, had he known that, he would not have adopted her.

He also contended that he and his family should not be deprived of the pleasure of owning a dog because they had made mistakes in handling a dog that they discovered was a “runner.” He explained that his family had always owned dogs and never had any kind of problem. His prior dogs did not run out of the yard even if a door was left open.

He said he returned Fancy to Best Friends the day after the attack and was told that it was not communicated to Best Friends by the West Valley Shelter that there was a prior problem with the dog. He said Best Friends had told him Fancy was socialized and was social with other dogs.

An official at Los Angeles Animal Services contends that Best Friends is informed about the behavior, characteristics and any observed indicators of potential problems with each animal it takes from the shelter -- including animal or human aggression. If records become separated from the animal after it leaves, LAAS provides a duplicate copy upon request.

Several employees confirmed that it is the policy followed by LAAS shelters that ALL records on each animal are provided to Best Friends, including veterinary entries, past history, and notes by kennel employees and volunteers. These records are provided both verbally and in printed form so they accompany the animal to the Best Friends' facility.

Mr. Lula testified that he had lost his best friend of nine years because of Mr. Pavone not properly confining his dog even after it had escaped before and that he had inaccurately claimed that he was bitten by Haley -- who was already dead -- as he tried to get the Pit Bull to release its fatal hold.

He said he wants to assure that this does not happen again. He said he and Haley had done nothing to provoke the attack, yet Mr. Pavone had not expressed any regret or remorse over the behavior of his dog. He hopes justice will prevail and he believes “consequences have to be paid.”

Mr. Pavone responded that he had said he and his family were deeply disturbed and sorry for this loss to the Lula's and that he had offered to pay for a new dog and training.

(Note: GM Brenda Barnette and Commissioners Finsten and Dicker were not present during the hearing.)

Mr. Pavone stated that Best Friends advised him they would socialize and train Fancy and take her to Utah.

Commissioner Wolfson wanted the Commission to strongly suggest to GM Barnette, who had concurred with the hearing officer's decision, that the Pavones be allowed to have another dog but restrict it to a smaller dog.  He asked if having the General Manager select an appropriate small dog could be included in the motion.

Commissioner Gross summarized the points in the case and explained that the three-year restriction is required by the LA Municipal Code, but Mr. Pavone is free to approach the General Manager and ask to be allowed to get another dog, if the Board finds the license is revoked.

He said he would tend to uphold the decision and urge the General Manager to work with the appellant in regard to the decision of license revocation. Best Friends is to take the dog out of state. Let the GM make the decision as to whether he can have another dog; and what would be the right kind of dog.

A motion including that wording was approved by Commissioners Gross, Garcia and Wolfson.

ALWAYS MORE THAN ONE VICTIM IN ATTACKS

After the meeting, the Pavones expressed their deep sorrow and sympathy to the Lulas and it was accepted graciously by this loving couple. It was obvious all have suffered immensely.

Both dog owners and both dogs were victims. The Pavones appear to not have been provided sufficient information before adopting this dog or this breed. Was there a sufficient inquiry made by Best Friends of their dog-ownership experience and needs and an adequate record on this dog and its behavioral history to determine if Fancy was a suitable pet for them? And, of course, the Lulas lost their beloved pet.

This emphasizes the responsibility of every animal shelter (including Best Friends) to assure there is full disclosure on any animal, so that both tragedy and liability are minimized. It also emphasizes the fact that no animal should be offered for adoption if there is reason on record or exhibited that it is a danger to the public and/or other pets.

Best Friends maintains a section on its website, titled, "Pit Bulls: Everything You Need to Know," which states that it "wants to help folks learn the truth about pit bull terriers." It describes pit-bull types as “couch-potatoes,” service and therapy dogs, sniffer dogs and companions, descending from Bulldogs used for bull-baiting and summarizes, “Thankfully, the sport has been banned for over a hundred years, and in that time, the dogs went from being prized fighters to family pets."

5) They’re Fighting Dogs - American Pit Bull Terriers were bred to be fighting dogs. It’s not uncommon for even well-socialized pit bulls to act aggressively toward other dogs.

13) All Pit Bull Owners Should Own a Break Stick - As a pit bull owner, you should own a break stick to help you break up any dogfights that occur. Just insert the stick behind the dog’s back teeth and twist to pry their mouth open.

27) Tail Wagging ≠ Happiness - Just because your dog is wagging his tail, that does NOT mean that he’s happy. Tail-wagging means your dog is excited, and the more excited a pit bull is, the more likely a fight is to break out. So if you’re out on a walk, you should probably steer clear of strange dogs wagging their tails.

THE DESPERATION AND CRUELTY OF "NO KILL"

Since Mayor Eric Garcetti and Best Friends declared LA Animal Services "No Kill" in January, city shelters have become increasingly packed. The official announcement that LA has solved its overpopulation problem signaled there is no reason for the public not to breed or dump an animal for which they no longer want responsibility, or which has behavioral problems. Their kids (and the adult owners) are assured that the "No Kill" shelter will find forever homes for all.

LAAS is currently also suffering from the retirement of experienced shelter managers and longtime supervisors, plus continual changes in upper management.

The City's six animal shelters have become dangerously overcrowded, especially with Pit Bulls, which cannot be kenneled together without recurring tragedies. It is cruel to allow shelters to become places where dogs fight to the point of serious injury or death, placing employees in imminent danger.

Most of LA Animal Services' Animal Care Technicians have less than five-years' experience and many have not had to protect themselves in kennels with more than one dog.

Brenda Barnette recently instituted a "life-saving" program and hired an Assistant General Manager for this purpose, who is apparently unfamiliar with multi-shelter management and the dangers of massive overcrowding.

IS LAAS PROVIDING "PROPER CARE AND TREATMENT" OR WAREHOUSING?

(c) By the delivery to, or picking up by, and the holding of, a stray live animal by any person or public or private entity.

(c) A public agency or shelter with whom an abandoned animal is deposited in the manner described in Section 1815 is bound to take charge of it, as provided in Section 597.1 of the Penal Code.

(d) The person in possession of the abandoned animal is subject to all local ordinances and state laws that govern the proper care and treatment of those animals.

IS BRENDA BARNETTE BEING HONEST WITH THE COMMISSION?

At the June 12 Commission meeting, GM Brenda Barnette commented that she has never seen the shelters so crowded. I advised the Commission, in public comment, that the overcrowding is causing the dogs to attack and fight in the kennels to the point of killing each other.

Commissioner Gross asked General Manager Brenda Barnette if there had been any incidents and she emphatically said, "No."

Brenda is not often seen in the shelters, but she receives immediate reports on all serious incidents, according to her staff. At the last Board meeting, when Brenda stated she had not been in touch with the volunteer who was badly mauled, Commissioner Finsten asked that Commissioners be promptly informed of any serious occurrence at the shelters.

Even if she ignored all the other "incidents," how could Brenda so quickly forget "Sweetie," the six-year-old grey Pit Bull, covered with tumors, who had been in the shelter since March 27. Sweetie became such a favorite of both staff and volunteers that it was decided to remove the growths that marred her appearance -- but not her personality.

Due to the total lack of space, another Pit Bull (reportedly with a history of aggression) was placed in the same kennel on the July 4 holiday weekend, with the belief/hope that Sweetie would be OK. That was not the case! Sweetie was so badly injured by the dog that she almost died, according to reports.

The devotion of the staff -- and undoubtedly the guilt -- for placing this innocent, trusting dog in such a horrific situation, caused Sweetie to be sent for emergency care to save her.

Did GM Barnette forget this and other "incidents"? Or, was this a failure to disclose?