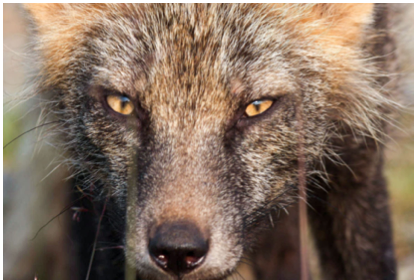 ANIMAL WATCH-With the current dysfunction of LA Animal Services in regard to insuring public safety and providing wildlife expertise, it seems GM Brenda Barnette, the Commission and Mayor Eric Garcetti are oblivious to the growing danger of rabies across the nation. Have they assured that 911 operators, LAPD and City animal shelters know how to direct callers 24/7 in the event of an attack by a potentially rabid animal in LA.?

February is mating season for coyotes, with pups usually born in April or May. In about ten weeks the pups begin to join in on hunts, and at seven to eight months of age, they are ready to leave their parents and fend for themselves. So, LA should start preparing for additional sightings and increased danger to pets and humans. They also need to be aware of the increased number of rabid coyotes being reported nationwide.

"The rabies virus pierces nerve cells with a bullet-shaped outer shell. It then travels along their long tentacle-like axons to the spinal cord, where it speeds to the brain. Once there, it begins to multiply inside brain cells, destroying them and shutting the body down, organ by organ."

With increased reports nationwide of attacks by rabid coyotes, how safe is LA?

The California Rabies Surveillance Report in 2015 found that only one coyote tested in the state was infected with rabies, and only eight rabid coyotes were identified in California from 1986 to 2015. The CDC reports that from 2008 to 2017, none of the three cases of human rabies in CA resulted from contact or attack by a coyote.

(In 2011, Precious Reynolds, the eight-year-old rabies victim who was admitted to UC Davis Medical Center with only a 2% chance of survival, is only the third survivor in the U.S. without the rabies vaccine shots. It is believed she contracted the disease from a feral cat near her school, which she attempted to pet.)

However, on March 25, 2017, the LA Times asked in its article, "Living with the Coyote Next Door," whether our wild canine (dog) neighbors are becoming more aggressive. The coyote probably doesn't consider it "aggression" when it scales a six-foot wall or fence and leaves with a family pet in its mouth -- it is merely taking advantage of an available food source. However, as they have become more comfortable in residential communities, we now have several generations of urban coyotes that have lost the innate fear that once caused them to maintain a distance from people. This resulted in a reported 16 attacks on humans in LA County in 2016 -- up from two in 2011.

Although most coyotes are not rabid, in 2016 the number of LA County residents who received rabies shots for coyote bites escalated from two in 2012 to 13 in 2016, according to the Times report.

The local and national numbers hardly constitute a public health emergency, but the increases are a bit unsettling. Following are just a few examples. Also see Rabies is on the Rise! Here’s How to Protect Your Pets.

On March 3, 2018, the Northern CA Merced Sun-Star posted an alarming article, entitled, "Police say coyote that bit several people in NY was rabid."  It states that a coyote which tested positive for rabies bit several people and killed a dog before it was captured and killed at a golf course in Yonkers. A second, companion coyote, also presumed to be rabid, was still loose.

In a more in-depth report of the incident, ABC7nyNews explains that a coyote had also attacked a woman riding a bicycle, but missed her and bit her back tire instead. Another biker said a coyote he estimated at 50 pounds clamped onto his leg with no warning. He was rushed to the hospital. A postal carrier was also bitten on the leg as she was delivering mail.  A surveillance video shows a man in Yonkers jumping into his car window as a coyote runs toward him.

On Feb. 6, 2018, WSOC-TV reports that, Tests confirm coyote that attacked Huntersville family's car was rabid. A family came face-to-face with a snarling coyote in their Huntersville, NC, neighborhood over the weekend, and the rabid animal actually started attacking their car. The encounter happened at Ranson Street and Dallas Street, not far from downtown.

In cell phone video recorded from inside the car, you can hear Schroter's children as the coyote circles the car and then turns its attention to the front bumper.

On Dec. 1, 2017, the Herald News advises, “Coyote population saturates Massachusetts...We now have coyotes in every mainland town in the state, and in relatively high densities. All available habitat is occupied by coyotes." While physical encounters with people are uncommon, the topic of coyote attacks in Massachusetts gained new attention in November after a rabid coyote attacked two...

November 22, 2017 - The coyote that bit a local woman Monday night tested positive for rabies at a Boston lab Wednesday. Judy Place, 63, said she had seen the animal hanging around near her home for a couple of weeks, but thought the coyote simply had pups in the area.

She called police Monday night after she heard the animal trying to get under her house. Place said the animal bit her leg after she went outside to show police where it was hiding. Police stated they were forced to shoot the coyote, which had also bit a second person, according to the Massachusetts Division of Fisheries and Wildlife.

August 22, 2017 - A walk in the woods turned into a terrifying experience for a woman in upstate New York. She visited a bike path and was capturing pictures of birds when a coyote attacked." He latched on to my leg," Sweenor told ABC13. "I just knew he was rabid."

She says she fought back, hitting the coyote with her camera, pinning it down and trying to throw the animal into the nearby water several times. "He just kept coming, he attacked me 10 or 15 times," Sweenor said. The third time she tried to throw the coyote into the water, she says she fell in also, finally losing the animal. She swam across, climbed up a hill and through a field to the closest home for help, putting pressure on her arm to try and slow the bleeding.

January 16, 2018 - On Jan. 10, Gila County Health & Emergency Management personnel confirmed a case of rabies in a coyote found gnawing on a mobile home.

Strangely, rabies often prompts infected animals to gnaw on trees, telephone poles and homes. “If you are seeing a fox that won’t run away from you or is chewing on a tree or telephone pole, be cautious,” said large animal vet Drew Justice.

Other symptoms of rabies include hyper aggression. “They don’t run away from you when you yell or seek to frighten them off,” Justice said. He said other signs include staggering or seeming blind.

THERE ARE TWO FORMS OF RABIES

Rabies appears in animals in two forms: A furious form and a dumb form. Furious form symptoms include aggressive attacks and random biting of objects, while animals will act dazed or paralyzed in the dumb form.

Rabies is caused by a virus and is spread by saliva, usually through bites. A series of shots can fight the virus after a person is exposed to rabies, but if the shots are not given before the person exhibits symptoms, there is no effective treatment. Rabies is almost always fatal if not treated.

Last August I was out for an early morning run when a stray dog rushed me from an alleyway and knocked me down. In light of other dog attacks in Dallas last summer, at least one of which was fatal, I naturally feared the worst as the dog clamped onto my ankle. But as soon as I recovered my wits enough to defend myself, the dog was off. The whole incident probably took no more than five seconds. Thus, began my education about rabies and rabies vaccinations.

February 24, 2018 - The Garrett County Health Department's Environmental Health Services reported the second case of laboratory-confirmed rabies this year.  The testing occurred after a February 24 altercation between a raccoon and a dog with a “documented-lapsed” rabies vaccination.

Following state procedure, the dog was revaccinated after the incident and is being closely monitored under the owners' control for 45 days. Since the timeframe between the two incidents (the altercation between the animals and the discovery of the dog’s exposure to rabies by the owner,) the owner began the rabies post-exposure prophylaxis.

These are a series of advisory statements collected from researching this article on a topic that is not usually discussed--how to handle your pet after an attack.  Much--but not all--is extracted from information proved by Garrett County Environmental Health Services.)

3.  Exposure occurs from the saliva of the rabid animal entering any broken skin—even a microscopic tear or opening.  Exposure can also result from the saliva coming into contact with a mucous membrane, such as the mouth, nose or eyes.

Pet owners are urged to check the vaccination status of their dogs and cats.

Under California law, all dogs are required, by law, to be vaccinated against rabies by four months of age and can be vaccinated as early as three months. Since cats are commonly exposed to rabies because of contact with infected bats and can also have interaction with skunks or raccoons, it is highly recommended that they are also vaccinated by three to four months of age.  (Cats should be kept inside, but it is still important that they have rabies shots in case they escape or just wander out an open door.)

Rabies vaccinations should be kept current to assure protection.  A current rabies certificate can also assure that the animal does not have to be immediately isolated or euthanized if it has been exposed to a rabid animal.

The High Cost of Surviving Rabies

Feb. 20, 2018 -- A brown bat the size of a mouse with teeth like a stapler may or may not have bitten Tamara Davis in Georgia. But it certainly took a bite out of her bank account, generating hospital bills of more than $17,000.

The groundhog that charged Linda Gallagher in Maryland while she was gardening last summer caused her to rack up more than $11,000 in charges.

A fox that sank its teeth into Crystal Edwards in North Carolina last year could end up costing her more than $22,000.

Doctors agreed that all three women needed a series of shots to protect them from the deadliest virus known to medicine -- rabies. Once symptoms begin, the disease is almost always fatal.

Read here to find out more in the event you or someone you love or care about is bitten.

Anyone attacked by a coyote should call 911 immediately. And please keep your pet(s) vaccinated and safe.