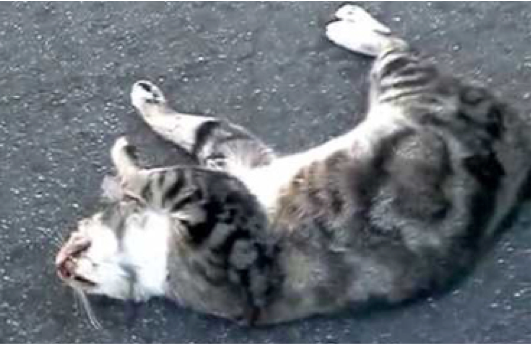 ANIMAL WATCH--Let's say you’ve discovered some mouse droppings, maybe even seen a mouse or rat scurrying by one night.  So you decide to get some rat poison and put it out confident the problem has been solved. The rat eats the poison and makes its way across the yard where it catches the eye of a cat, a hawk, an owl that move in to catch this easy prey because it has slowed down or is moving erratically.  Let's say the neighbor’s cat catches it, eats it.  A few days later the heartbroken neighbor is posting signs wondering where their cat has disappeared to while a distraught neighbor a few doors over is calling dead animal pick up for the cat lying under the bushes.

This is not an unusual scenario.  Using poison to kill rodents creates a serious hazard to cats and local birds of prey.

Strychnine is a very strong and dangerous poison that is often added to bait for killing rats, moles, gophers, and other rodents or unwanted predators. Having a very short duration of action, the clinical symptoms of strychnine poisoning typically appear within ten minutes to two hours after ingestion, resulting in sudden death.

Patients often will die due to spamming of the muscles involved in respiration, resulting in strangulation. Cats of all ages are equally susceptible to the adverse effects of strychnine.

The following are some of the symptoms of strychnine poisoning:

So how do we get rid of rats without creating lethal danger to our wonderful local cats, hawks and owls, all of whom provide the BEST way to kill rats and mice?

First of all a message to all the kind people providing food to their local feral population, do NOT put food out and keep it out.  Put it out at specific times in the day and pick up whatever the cat doesn’t eat.  That food attracts other creatures as well. Cats will know when the food is coming especially if you call them every time.

We also discourage the use of glue traps as it is a particularly cruel and inhumane, time consuming way to kill a rodent.  The mouse runs onto it, sticks, and is terrified while its struggles to escape. It will either die slowly of dehydration or starvation. The traps can rip off fur and skin while they struggle, and rodents have attempted to chew through their own limbs to get free. Other animals can get trapped on it as well.

There is now a popular, new and effective trap that is being used by responsible residents. An electric trap. Small box with lure at back. Only mice and rats can fit in and are immediately zapped.  More humane and less messy than the old fashioned snap traps. Just Google electric rat traps.

Here are some websites that give excellent instruction on ways to discourage rodents from visiting at all including the use peppermint oil - Add 20-30 drops of peppermint essential oil to each cotton ball and lay strategically around your home. Refresh every week or so, or whenever you notice the smell is fading.) Did you know rodents hate to cross aluminum foil?

(Dianne Lawrence is a dog trainer and the publisher of The Neighborhood News. Reach her at: whatagooddogla.com/)