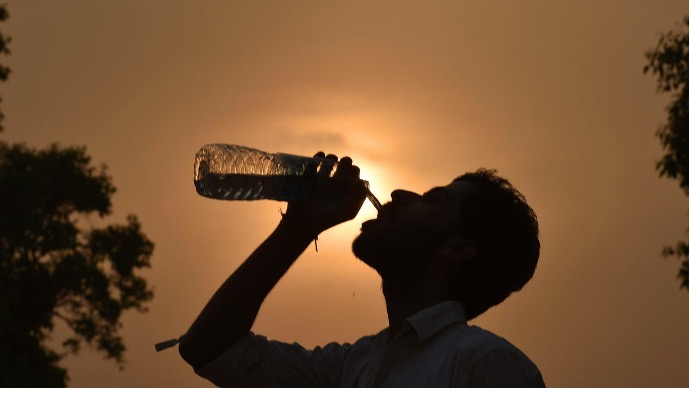 CLIMATE WATCH - How bad can it (climate change) get? The sky’s the limit! No pun intended.

Still, the general public is tired of negative articles about climate change. It turns them off. Climate change is impossible to deal with. It’s too much; it’s too negative!

As a result, baffling emails come with loud and clear messages, some subtle but some not so subtle. Yet, these same people want access to scientific facts and data that describes just how challenging things really are. They even admit to that while complaining about too much doom and gloom. Nobody is satisfied.

All of which serves as an ideal segue for introduction to a new book about how bad things really truly are: Hothouse Earth (Icon Books, August 2022) by Bill McGuire, Emeritus Professor of Geophysical and Climate Hazards at University College London.

Dr. McGuire doesn’t pull any punches. Accordingly, “There is no chance of avoiding climate breakdown.” That statement prompts the idea that maybe climate breakdown is already here. It sure looks and feels that way.

McGuire’s book is discussed in an article entitled: ’Soon the World Will be Unrecognizable’: Is it Still Possible to Prevent Total Climate Meltdown? The Guardian, July 30, 2022: Accordingly, most other climate experts still maintain we have time left, although not very much, to bring about meaningful reductions in greenhouse gas emissions. This, of course, is a well-worn posture that goes nowhere.

Not so McGuire: “I know a lot of people working in climate science who say one thing in public but a very different thing in private. In confidence, they are all much more scared about the future we face, but they won’t admit that in public. I call this climate appeasement and I believe it only makes things worse. The world needs to know how bad things are going to get before we can hope to tackle the crisis.”

Big Oil’s Capture is all about the necessity for the public to know that IPCC reports are edited by oil and gas representatives and governments that are fossil fuel dependent, exercising a hand in the final drafting of IPCC reports.

Yes, the same publicly lambasted interests that cause global warming also write and/or edit portions of the all-important IPCC reports. Full stop! Nothing more needs to be said to fully understand the dichotomy between McGuire’s exposure of the dangers of climate change and doctored IPCC reports, claiming, in so many words: It can be fixed. “Don’t worry” as an underlying message, “carbon capture will fix it,” etc. etc. etc. But wrong and misleading on several counts!

Pro-fossil fuel input is so wrongheaded that it deserves a bit more color, as follows: A senior staff member of Saudi Aramco, the state-owned oil company, was one of two lead coordinating authors for IPCC Chapter 12 on Cross-Sector Perspectives. A staff member of Chevron reviewed the IPCC chapter on Energy Systems.

Moreover, a recent report by the UN Environmental Programme says producers plan twice the amount of fossil fuels “than would be consistent with limiting warming to 1.5°C in plans for development by 2030.” In other words, climate change mitigation efforts to limit global warming to 1.5°C increasingly look more and more like a paper tiger hanging by a thread.

Fossil fuel interests embedded in the details and the editing of IPCC reports is preposterous. It makes the fox-in-the-henhouse metaphor a laughing stock simply because it’s way too simple of a metaphor to explain the complexity and full upshot.

All of which lends more and more credence to McGuire’s thesis that the bright light at the end of the tunnel is not a signal of salvation in waiting; rather, it’s a fully loaded freight train clipping along at full throttle.

According to McGuire: “We have passed the point of no return and can expect a future in which lethal heat waves and temperatures in excess of 50C (120F) are common in the tropics; where summers at temperate latitudes will invariably be baking hot, and where our oceans are destined to become warm and acidic. A child born in 2020 will face a far more hostile world that its grandparents did,” Ibid.

McGuire’s statement “a future in which lethal heat waves…” makes one wonder where all of those people in the tropics will go to live.

“Lethal heat” is death by heat.

“Just look at what is happening already to a world which has only heated up by just over one degree. It turns out the climate is changing for the worse far quicker than predicted by early climate models. That’s something that was never expected.” (McGuire)

McGuire poo-poos the COP26 agreement in Glasgow last year stating that every effort will be exercised to limit global temps to 1.5°C, also agreeing to reduce global carbon emissions by 45% by 2030. According to McGuire, rather than reduction of emissions, the real world is on course for a 14% increase in emissions by 2030, meaning the 1.5C guardrail will be shattered, hands down!

Rystad Energy claims: “Just 20 of the world’s biggest oil and gas companies, including the likes of Shell, Exxon and Gazprom, are projected to spend $932B by the end of 2030 developing new oil and gas fields, and $1.5 trillion in total by 2040.” That’s a lot of CO2 emissions going somewhere, like up into the atmosphere. (Source: World’s Biggest Fossil Fuel Firms Projected to Spend Almost a Trillion Dollars on New Oil and Gas Fields by 2030, Global Witness org., April 2022)

According to McGuire, based upon the most hopeful estimates of emission cut pledges at COP26, the planet is still on course for 2.4C and 3C. McGuire expects a rise of 2C to seriously threaten stability of global society. As people panic, somebody somewhere pays the price or consequences, history is full of examples, e.g., thousands of aristocrat heads rolled during the French Revolution 1789-1794, including a king and a queen and entire retinues, as tens of thousands Parisians lined the streets to watch an open cart drawn by two white stallions trudge along, carrying former Queen Marie Antoinette with her executioner Henri Sanson to the guillotine. Her last words were an apology to Sanson for stepping on his foot as she slowly approached the towering guillotine’s headrest.

McGuire claims there is little that can prevent climate breakdown. Therefore, adaptation to a bleaker world will be all-important. In that regard, he believes that all-out disaster may be prevented if carbon emissions are substantially cut in the near future and if adapting to a hotter world is properly employed. For example, in the UK thousands of inappropriate homes are built each year. These are modern, tiny, poorly insulated homes that can, and do, turn into heat traps. Adaptation to hotter longer lasting heatwaves is one helpful solution.

According to McGuire, a grimmer world in the days ahead may or may not threaten survival of human civilization, assuming people realize it and act posthaste. Indeed, that would be a first!

For a gut check on posthaste behavior, check out the film Don’t Look Up (Netflix December 2021) staring Leonardo DiCaprio for convincing evidence of philistinism at work. Umm, on second thought forget about the posthaste idea. Don’t Look Up is the most accurate big screen depiction of how and why global warming has spun out of control. It’s a must-see film.

McGuire concludes: “This is a call to arms. So if you feel the need to glue yourself to a motorway or blockade an oil refinery, do it. Drive an electric car or, even better use public transport, walk or cycle. Switch to a green energy tariff; eat less meat. Stop flying; lobby your elected representatives at both local and national level; and use your vote wisely to put in power a government that walks the talk on the climate emergency,” Ibid.

For the first time in modern history major changes in lifestyle are now a requirement for human survival.

Wouldn’t it be wonderful if climate scientists like Bill McGuire (there are several others with very similar views) had it all wrong?