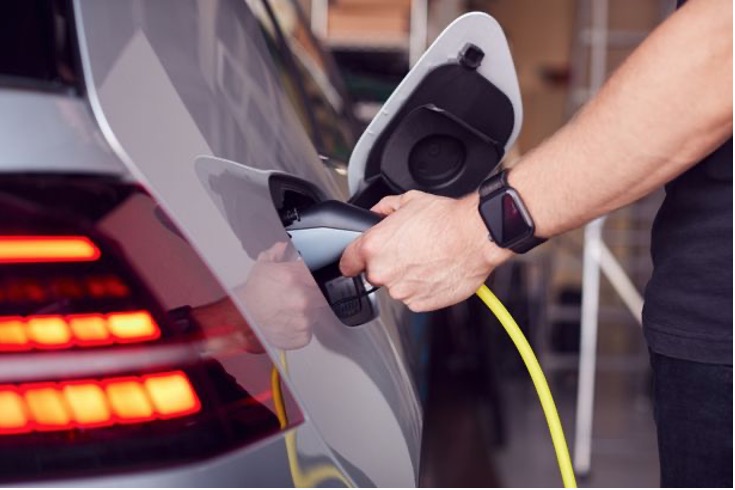 And the U.S. Supreme Court has just hobbled the federal government’s ability to tackle climate pollution. That’s why it’s so frustrating that the California Air Resources Board is knuckling under to the auto industry with its weak plan for cutting tailpipe pollution, the state’s largest source of climate-heating greenhouse gases.

Gov. Gavin Newsom needs to step in before the plan is finalized next month and tell the board to strengthen the rule, speeding the all-electric transition and slashing auto pollution. The stakes couldn’t be higher.

In the coming weeks, the air board will finalize auto pollution-reduction targets through 2035 — but it’s falling short of what’s needed.

Newsom knows that curbing auto emissions is key to protecting our lungs and the planet. He already has declared that 100% of new cars sold must be electric by 2035. But scientists warn that to prevent more severe climate damage, almost every car on the road in 2050 must be emissions-free. Because many drivers keep their cars 20 years or more, the last gas-powered cars, pickups and SUVs must be sold no later than 2030. Yet the draft rule requires only that 68% of vehicles be electric by then.

The board proposes no greenhouse-gas standards for gas-powered cars, millions of which will be sold in the coming years. Newsom must put strict pollution limits on them, which will deliver not only climate and health protections but also millions of dollars in consumer savings at the pumps as cars and trucks guzzle less gas.

Equity also is key. The board must develop a mandatory program to protect low-income communities and the environment far better than its half-hearted efforts do so far. The air board’s voluntary equity program offers credits to automakers who choose to sell discounted electric vehicles, which in turn allows them to make more polluting cars. That tactic worsens air quality and global warming.

A stronger clean-cars rule is a political winner for the governor. Sixty-two percent of Californians support reaching 100% electric-vehicle sales by 2030. And with climate legislation stalled in Congress, this rule is the single biggest step California can take to fight climate change.

There’s no excuse for delay when Californians are staring down a summer of tinderbox conditions, water shortages and dangerous heat.

As for automakers, they have the technology to meet more ambitious electric-vehicle and pollution-reduction targets that will protect the climate. With electric-vehicle costs falling rapidly, in many cases it already is cheaper to buy and run an electric vehicle than a gas-powered vehicle. This is auto mechanics, not rocket science.

Auto companies tout promises to make vast numbers of electric vehicles while selling huge numbers of gas-guzzling SUVs and pickups and lobbying to weaken environmental rules. Meanwhile, consumers — who stand to save millions at the gas pump — are lining up to buy plug-in vehicles, sales of which rose 82% during the first three quarters of last year. But instead of meeting this demand, major carmakers are capping waitlists. For example, GM sold 7,303 electric vehicles in the first six months of this year, while Tesla sold more than 250,000. Long waitlists prove both that consumer demand for electric vehicles is sky-high and that automakers are dragging their feet on producing them in mass quantities.

California used to be a world leader in fighting auto pollution. Now, Europe and China are leading the way, thanks in part to government policies. Newsom can reclaim California’s mantle as the standard-bearer for strong clean-car rules — but only if that standard requires a rapid and equitable transition.

California is on fire now. To let the air board jeopardize the state’s climate goals would be a dangerous mistake.

The California Air Resources Board is showing it won’t resist automakers’ pressure. Newsom needs to take the wheel and drive the state to a safe, pollution-free future.