GELFAND’S WORLD--Put a group of people who are strongly supportive of the police around the same table with a few people who are skeptical, add two or three senior LAPD administrators to the mix, and what do you get? Back in 1995, in the aftermath of the O.J. Simpson verdict, Mark Ridley-Thomas created a process called Days of Dialogue. It put citizens and police together, and has been continuing the process through a nonprofit foundation known as The Institute for Nonviolence in Los Angeles. I attended one such meeting in this, the twentieth year of the process, and have a few observations to provide.

First, let me provide a little background. There were 5 full tables, each of which included a mix of people like I've described above. We also had a facilitator at each table. We each received a program guide which you can download here. It's pretty obvious from the program that this was not designed to be either an attack on police practices or a white wash. The program did, however, ask disturbing questions about police shootings and racial profiling. There were also a couple of other topics that came up that seemed to be a little irrelevant to what Ridley-Thomas was originally trying to achieve.

My group was largely from the harbor area. The opening introductions included a long, passionate speech by one woman who declared how strongly she supports the police, and complained that they have become the targets of unwarranted attacks. She seemed to be implying that the public are anti-cop, and that the police are therefore being overly restrained in fighting crime. She was joined by another woman who had similar reflections.

This is not in keeping with my experience locally. The police come to our neighborhood council meetings to talk about crime prevention, and are greeted with applause. My group has been working to expand the Neighborhood Watch program, and has been supported by the LAPD regarding the program.

Perhaps my area is atypical, but I don't really think so. Rather, I suspect that we represent a statistical mix of income groups, races, and ethnicities that happens to be fairly suburban. If we represent the public point of view, than the LAPD are looking pretty good to the residents. I hasten to add that this attitude may be a new thing, and that programs to bring officers in contact with the general public (such as the Senior Lead Officer program) may be potentiating it.

My contribution was to point out that the makeup of the LAPD has changed enormously since the days of Chief Parker. As a recent documentary showed, Tom Bradley was refused a deserved promotion due to his race, and it took another decade to rid such practices from the LAPD. Female police officers were relegated to a subordinate role, as you can find depicted (admittedly in fictionalized form) on the old Dragnet television show. At my table, we had a fairly equal mix of male and female officers of varied ethnic groups. Times really have changed since the days of William Parker, and I suspect that relations between the LAPD and public are also changing.

I also pointed out that when racist practices occur in other parts of the country, all police come under fire. This might not be fair, but it it is part of human nature to question and to doubt.

One question brought up by the facilitator seemed strange to me. She invited us to discuss the media and its role in the perception of the police. This seemed to push a few peoples' buttons, because they immediately launched into angry denunciations of the media. The issue, in their minds, was that the media highlight the few negative actions by police, and fail to show the good things that police do on an everyday basis. In short, we heard a localized rendition of recent Republican presidential debates. I don't mean to be mocking of my fellow panelists, because at some level I tend to agree with that critique of the media, but I think it needs to be taken out of the partisan political context and brought into a more comprehensive analysis of how superficial our television news has become.

Interestingly, two of our panelists suggested that Channel 5 is the most straightforward news source (they used the term "unbiased") while one of the senior LAPD officers allowed as how Channel 11 is not trustworthy.

I also think that the view we heard, so critical of TV, is seriously shortsighted because television is full of crime dramas which glorify the police, often enough by glorifying a cowboy cop. It's the Dirty Harry rendition of the crime fighter. I wonder how much of our perception of the police is skewed by television's fictional crime dramas. In a side conversation with one of the officers, I was told that the cowboy cop is a thing of the past. If so, the police in the real world aren't telling their own stories strongly enough to counteract night after night of CSI and Blue Bloods.

What was curious to me was that the police around the table neither confirmed nor denied the assertion that bad publicity in the media is turning public perception against them. I would have expected the police brass to be reassuring, in the sense of explaining that the LAPD continues to be an effective crime fighting force and that it stands behind its rules and procedures. I didn't hear that. There was just silence on the part of the uniformed officers as to whether they feel professionally handcuffed.

The topic of homelessness came up and resulted in the usual sighs, complaints, and bromides (there should be a place for the homeless  to camp, or they should be moved to the desert). I see this as a momentary public obsession on a topic that will go away fairly soon, or at least as soon as enough underbrush grows back along our freeway onramps and hillsides for the homeless to become invisible again.

But there was one thing that stood out in the discussion. On a topic where the police, in actuality, can't accomplish much to suppress people from being mentally ill, the police around the table discussed their attempts to help individuals who need help and are capable of accepting it. In short, the uniformed officers showed more humanity and skepticism than several of our panelists. 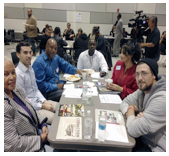 There was one topic that was raised by the facilitator that created some sparks. We were invited to discuss our views of firearms ownership. The woman who expressed her solidarity with the police allowed as how everybody should carry a gun. Maybe she said that we should all  be allowed to carry a gun, but it came out as a blanket appeal to an armed population. One male panelist suggested that we would be better off carrying guns in the open -- he suggested that if a police officer approached him and could see the gun, the officer would be reassured. At least he wouldn't be suspected of carrying something concealed.

I found this reasoning to be suspect, based on the oft-expressed views of police chiefs supporting gun control. I always had the impression that the police brass and the cops on duty prefer a population that is less likely to draw a gun on them. Might I add that the current practice (which we were not invited to discuss) of the police treating hidden hands as a license to shoot certainly argues against my fellow panelist's point of view. In a later conversation with one of the senior LAPD officers, I asked and received confirmation that police don't, in general, feel better when members of the public are going armed.

There was one topic that everyone, both police and public agreed on. When a member of the public calls the police station and gets an abrupt response from the desk officer, it is damaging to the public's perception of the police. The officers who were present pointed out that they were aware that problems have occurred, and vowed to force improvement.

I don't know how much light was shown on these complex and spirited topics, or whether anybody's mind was changed, but I suspect that we are seeing an ongoing process in which LAPD officers get to meet members of the public who don't dislike them and are not fleeing arrest. That's a start. My thanks to officer Wight and the other LAPD members who gave us several hours of their time.