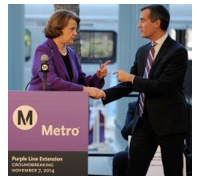 TRANSPORTATION POLITICS--No one likes being a chump when it comes to paying money for a cause ... even the right cause.  For that reason the City of LA voters turned down a billion dollar solar panel initiative because the LADWP would have made us pay $2-3 billion for what could and should have been $1 billion.  Of course, the same holds true for transit.

Transit, as with road/freeway transportation, must make fiscal and operative sense.  Too often we have seen transit funding focused on political considerations rather than scientific or engineering considerations:

1) Hence we see the political leadership of the San Fernando Valley falling over themselves on congratulating the success of the Orange Line Busway, and demanding the Valley get its "fair share" of transit funding ... after years of rebuffing transit advocates who called for ending the law that prevented the Busway from becoming an above-ground light rail line.

Well, perhaps it was political reality that allowed only a Busway in the Valley, but both the liberal Westside/Mid-City regions and the conservative San Gabriel Valley (that "other" valley) demanded and held out for a light rail line, and the rest of the county will NOT allow the San Fernando Valley to get BOTH a Busway to light rail conversion Orange Line AND a San Fernando Valley-Westside underground rail line.

They're both good projects for the Valley, by the way--but so are the Expo Line and the Foothill Gold Line to Claremont.  In other words, the Valley leadership will have to acknowledge their past errors and focus on a pragmatic, fiscally-smart and viable method of funding a truly modern, efficient east/west and north/south rail grid.

The Valley can promote an Orange Line Upgrade Task Force to fund small projects, such as grade-separating the Busway at key intersections where a putative light rail line would be elevated (no underground nonsense!), which would gradually create that magic moment where the transit line could be switched from bus to rail.  In the meantime, more and/or longer buses would also help the now-maxed-out Orange Line Busway capacity.

2) Moving from the Valley to Downtown, it shouldn't come as a surprise that the Downtown Connector's costs and construction delays are mounting.

Building a large underground rail project in megadense Downtown and finding a surprise number of utilities under the streets of LA?  Who knew?

Of course, this is a reasonable extra expense and delay...and it is part of the reason why previously-built projects like the Orange Line Busway will have to find its own alternative ways of funding its inevitable conversion into a light rail line.

3) Similarly, the legal efforts of Metro to extend the Purple Line Subway to the proper and centrally-located stop at Century City are laudable.

We've no time for debates with Beverly Hills residents and political leaders who have their own agendas--the need for the Wilshire Blvd. Subway to achieve maximum ridership and efficiency is self-explanatory.  This is both the moral and fiscally-proper thing to do.

4) What is less clear is what the state will do with a high-speed rail project that is in the middle of numerous legal and engineering battles with residents and political forces who are demanding expensive tunnels that in some way, shape, or form will have to be built.

If another ballot measure comes up to stop the California High Speed Rail project, it's anyone's guess what the outcome will be.  But with more emphasis on water desalination and other related infrastructure projects, as well as local transportation projects, it will be up to Governor Brown to convince the voters that the project is legally and fiscally prudent.

Public money, and public investments, are just that ... public.  In the end, we are still a representative democracy--and it remains the responsibility of a project's promoters, not the taxpaying voters, to justify major expenditures that the rest of us will have to pay for.

And we will pay for it, if the case can be transparently made.

(Ken Alpern is a Westside Village Zone Director and Board member of the Mar Vista Community Council (MVCC), previously co-chaired its Planning and Outreach Committees, and currently is Co-Chair of its MVCC Transportation/Infrastructure Committee.  He is co-chair of the CD11Transportation Advisory Committee and chairs the nonprofit Transit Coalition, and can be reached at  Alpern@MarVista.org.   He also does regular commentary on the Mark Isler Radio Show on AM 870, and co-chairs the grassroots Friends of the Green Line at www.fogl.us. The views expressed in this article are solely those of Mr. Alpern.)