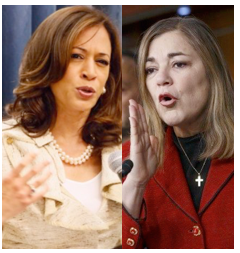 WOMEN AND POLITICS--We’re in the midst of an already contentious presidential primary season with an expansive enough field on the GOP side to necessitate a “kiddie table” debate forum. It’s easy to forget that the June 7 primary will also draw out the top two contenders for Boxer’s Senate seat, the first open seat in 24 years.

This primary election cycle, currently includes at least four female candidates on both the state and national fronts. As women garner more attention on the political stage, we need to examine the role of gender in politics. Does gender give enough pause to throw support to that candidate?

Certainly on the national stage, there are differences in ideology between Hillary Clinton and Carly Fiorina. Let’s look at the Senatorial race. As you may know, California is one of three states to hold a blanket primary (top two primary) in which voters are not required to affiliate with a particular political party.

Two women, Attorney General Kamala Harris (photo left) and U.S. Representative Loretta Sanchez (photo right), have declared their candidacies. The total of potential candidates includes six women. Harris tops the declared candidates on both sides in fundraising, with double the cash raised by Sanchez. Both candidates have vastly outraised the male candidates, likely to be a determining factor in primary or election outcomes, especially in an election cycle that strategists expect to ultimately be the most costly of Senate races in history.

When female voters do cast our ballots, should gender play into our decisions?

Whether we’re discussing Presidential, Senatorial, or even local elections, there’s a presumption that certain issues belong to women, an idea that perhaps hurts the equality movement in the end. The Senate will likely continue to vote on abortion rights, family leave, equal pay, childcare, and childcare, issues that impact families and, in some cases, unmarried people. Universal human rights and sex trafficking are also seen as issues strategically important to “market” a candidate to women.

Viewing women as a special interest group marginalizes many of our concerns, which should not be divided by gender lines. Shouldn’t we all be concerned with issues like work/life balance and treating people equitably?

We’re at a crucial turning point with both the Presidential and California Senatorial races. As voters in the primary and beyond, Californians (and the nation) will be best served if we elect a candidate, woman or man, who will fight to protect all these issues, as well as support effective strategies for foreign policy, healthcare, the economy, the environment, immigration, and trade. None of these issues are the sole domain of women or men.

Before we do go to the polls, we need to vet candidates, both women and men, to ensure we get the best option for California and the nation. May the best (wo)man win.