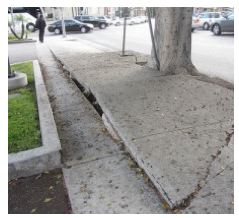 SIDEWALKS IN SERIOUS NEED-On Monday, November 16, two committees of the Los Angeles City Council were scheduled to discuss a proposal that will shape the future of the city’s sidewalks.

The joint meeting of the city’s Public Works and Budget Committees were set to take place at 2 p.m. in City Hall Council Chambers. Critics of the proposal argue that the city fails to treat sidewalks as a serious core of the mobility network.

Readers may recall that the city faces a backlog of sidewalk repair estimated $1.5 billion.  In contrast to other transportation networks – streets, freeways, bike paths – responsibility (and liability) for sidewalks is somewhat complicated.  Legally, the underlying property owner is responsible for building and maintaining walk access. In the past, the city took some responsibility for repairs, but the sidewalks deteriorated faster than the city was able to fix them. In 2014, the LA City Council decided to target limited sidewalk funding only to repair sites in front of city-owned properties. Those repairs are underway.

In 2015, the city committed to $1.4 billion worth of sidewalk repair in order to settle Willits vs. City of Los Angeles – a class action lawsuit over LA’s failure to make the public pedestrian right-of-way accessible to disabled people. LA will the invest $1.4 billion over the next 30 years.

The city’s proposed sidewalk strategy is being called “fix and release.” City funds would pay to repair sidewalks damaged by tree roots. The city would guarantee the work for five years, then the underlying property owner would be responsible for any future sidewalk repair.

Though “fix and release” would be expected to improve many of LA’s failing sidewalks, the policy has numerous drawbacks. Ultimately, it creates an inconsistent patchwork, with little to no assurance of consistent repairs now or maintenance in the future.

Furthermore, “fix and release” is more likely to fail in low-income neighborhoods. And it may even incentivize a great deal of tree removal, as property owners considering their own liability will decide to remove “nuisance” trees. It may result in newly-repaired unshaded pavement that becomes unusable because it will be unbearably hot during much of the year.

What is the solution? Investing in Place’s Jessica Meaney states that “Los Angeles needs to fund and maintain its sidewalks as part of its transportation network – just like we do our roadways.” In a comment letterthe AARP’s State Director Nancy McPherson expresses a similar sentiment stating that AARP strongly supports “reimagining our sidewalks as an integral piece of the city’s infrastructure, one which produces multiple benefits for Angelenos of all ages.”

Instead of adopting the “fix and release” proposal as is, Investing in Place, AARP, and other livability advocates are urging the city to first fund and perform an inventory of existing and missing sidewalks.

From the inventory, advocates are urging the city to further create “a prioritization plan based on data and need” taking into account Vision Zero, equity, public health, and pedestrian and transit use data.

They state that the inventory and prioritization plan would help the city “to leverage other sources of funds to accelerate and successfully implement this infrastructure program in a more effective and inclusive manner.”

(Joe Linton is the editor of StreetsblogLA.  He founded the LA River Ride, co-founded the Los Angeles County Bicycle Coalition, worked in key early leadership roles at CicLAvia and C.I.C.L.E., served on the board of directors of Friends of the LA River, Southern California Streets Initiative, and LA Eco-Village.)  Photo: Waltarr/Flickr  Edited for CityWatch by Linda Abrams.