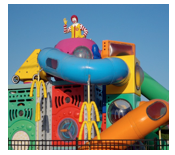 VOICES--When it comes to predatory marketing to children, nobody’s lovin’ it like McDonald’s.

In addition to selling unhealthy food, the chain lures kids in with toys and a playground — and its spokesperson is a clown. But it’s the fast food giant’s marketing to captive audiences at schools that really takes the cake.

This came to my attention when I saw photos of “McSchool Night” on Facebook. A woman I know was boasting that her son had flipped burgers at the event.

McDonald’s — like all food marketers — knows that children develop eating habits and brand loyalties that can last a lifetime. The company wants kids to build warm and happy memories now so they associate the Golden Arches with nostalgia later on. The sooner they get into the habit of eating at the chain, the better.

Here’s how it works at McSchool Nights.

The school invites students and their families to have dinner at a local McDonald’s on a certain night, when a percentage of the proceeds will be donated to the school. The amount varies, but it’s typically not more than 10 to 20 percent.

When the students arrive at the restaurant, they find their teachers behind the registers asking, “Do you want fries with that?” They experience a fun-filled meal with their friends. And, of course, their parents spend money.

In practice, these shindigs often raise only about $1 per student, according to one critical study. For that money, parents could’ve kicked in a buck each for their kids to do something else fun without being marketed to.

I’ll be honest: I understand exactly how fun McTeacher’s Night must be.

My health-conscious parents rarely got us fast food, so McDonald’s was a big treat in our house. If I’d gotten to see my teacher dressed up in a McDonald’s uniform while eating junk and playing with my friends, I would’ve loved it.

Of course, I would have also liked to watch R-rated movies, skip school whenever I felt like it, and eat birthday cake every day for breakfast. And my parents would have never allowed any of that.

Nor would I as a parent. Being a grownup means protecting children from choices they’re not yet mature enough to make for themselves.

Surely, schools can find a healthier way for children to have fun while raising money for their education. Or even a not-so-healthy way that lets the kids eat treats without serving them up to a corporation peddling junk.

(Jill Richardson is the author of Recipe for America: Why Our Food System Is Broken and What WeCan Do to Fix It. This column was provided CityWatch by OtherWords.org.)  Edited for CityWatch by Linda Abrams.