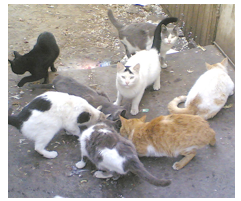 ANIMAL WATCH-The County of Los Angeles took a huge step forward in cat protection when it passed an ordinance mandating all cats be microchipped as well as spayed or neutered. Twenty-one speakers, including cat owners, rescuers, a veterinarian and local representatives of PETA urged approval.

The County already allows up to five cats if they are licensed, altered and indoor cats. It has been determined that better identification for cats is needed to reunite lost pets with owners and reduce the numbers entering County shelters, said Animal Care and Control Director Marcia Mayeda.

That same day the City took a questionable step regarding cats. The City Council instructed the City Attorney to prepare an ordinance allowing every household to maintain five cats, with no provision for licensing or microchipping and no way to assure the cats are altered or kept indoors.

This was opposed by five speakers at the Personnel and Animal Welfare Committee, including Dr. Dan Silver, representing the Endangered Habitats League, and Jim Clarke of the Apartment Association of Greater Los Angeles (AAGLA).

No one spoke in support of this ordinance that would have no provision restricting the five-cat increase to only cats obtained from LA Animal Services shelters, although that is the main intention, according to Councilman Paul Koretz.

The ordinance proposal was a cut-and-paste version of LA Animal Services GM Brenda Barnette’s recent 20-cat-per-property proposal that was originally so poorly composed that Koretz had to add a motion explaining what it was supposed to have said. This glaring error was pointed out to the Councilman in a letter opposing the increase by the Urban Wildlands Group.

Instead of adding logical measures to this ordinance -- keeping cats out of shelters and addressing the stray/feral cat overpopulation at its source -- twelve highly paid officials blindly bowed to Koretz’ persistence in getting an increase to the limit. Or…maybe they didn’t even notice that this item was on the consent calendar.

This was reminiscent of a comment made by Jim Bickhart -- then on the staff of Mayor Villaraigosa and now under contract to Paul Koretz -- in a 2012 e-mail he sent to the head of a large animal organization. In it Bickhart urged a change to the definition of “pet shops/dog kennels” in a Koretz- sponsored ordinance that allowed an unlimited number of adult shelter dogs to be kept in any C-2 location and within 500 feet of residences.

Bickhart believed that this change would avoid the need for public hearings or securing a Conditional Use Permit. He wrote, “Years of experience tells me that if they’d [Koretz’ office] just go ahead with the kind of solution we’re proposing, there’s a 99% likelihood it would go through Council unnoticed and that would be the end of that.”

So, here’s how Koretz’ five-cat plan works (or doesn’t.) If someone owns three cats, they can be left outdoor (and unidentified) but those who have five cats are supposed to keep them indoors. But there is no explanation of how this is to be enforced.

Passage of this increase essentially removes a neighbor’s right to complain about nuisance activities if the cats get out. Since almost all cats are various earth tone shades, how do you identify which escaped cat is the one that just used your yard for a litterbox?

Caring cat owners already spay/neuter and microchip their pets and keep them indoors, so adding microchipping to the requirement for more cats would not affect them.

Unfortunately, many of the inexperienced or irresponsible owners just put their cats outdoors rather than get a City voucher to “fix” them and eliminate the obnoxious behavior felines exhibit during mating season. These cats and their offspring continue to breed and become unsocialized ferals. Merely allowing these same owners to have five cats, rather than three, will not solve the cat population problem. Unfettered breeding will exacerbate it by at least sixty percent.

There are other reasons not to make a blanket change that substantially exceeds cat limit laws in surrounding cities. High among these is assuring that a household can afford five cats. A 2008 ASPCA survey shows the basic cost per year to own one cat at about $1,070 -- a 2015 commenter now estimates double that much if the cat is to receive sound nutrition and quality care. Thousands of dollars can easily be incurred in veterinary bills for an illness or injury. Multiply all these costs by five and you can see how the expense of caring for cats is a serious matter if we want to insure that cats are not neglected.

The human population density of the City of Los Angeles must also be considered if pet-limits are increased. Allergies and diseases transmitted by cats to people or to other felines are a danger. Toxoplasmosis, flea-borne typhus, rabies and parasites can all infect cats and become transmissible to humans.

About 20 to 30 percent of persons with allergic asthma have severe flare-ups after coming in contact with a cat. And even indirect contact with the belongings of someone who owns a cat can cause serious cat allergy symptoms in some people, says WebMD. More cats living nearby increases the likelihood of a reaction.

Flea-borne typhus is another reason to assure cats are kept indoors. In Orange County, CA, the health department found that 85 percent of reported cases of this disease were hospitalized for an average of six days, with some requiring hospitalization for months. The majority of reported human cases involved the bacterium Rickettsia felis, the cat flea, according to Pest Control Technology.

Toxoplasma (T.gondii) is a parasite that can live in almost any warm-blooded mammal, but it reproduces sexually only in the intestines of cats. It is found in almost every litterbox, regardless of how fastidious a cat owner is. Immune-suppressed individuals and pregnant women are especially vulnerable to infection. Toxoplasmosis may cause various forms of mental illness, including schizophrenia. It may also be the cause of the reclusive hoarding behavior of “crazy cat ladies,” reports say.

The city of Los Angeles has developed no vibrant educational campaign for cat owners nor a vigorous, enforced spay/neuter program for cats during the five-year tenure of GM Brenda Barnette -- contrary to her claims.

Hoarding cases in the city are rising rapidly, according to Barnette’s own oral reports to the LA Animal Services Commission. This begs the question of whether this is the time for Los Angeles to enable keeping more cats without safeguards.