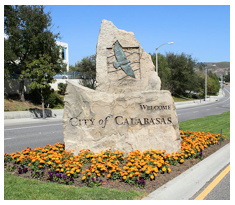 GUEST COMMENTARY--With a week to go until the November 3 Calabasas City Council election, I noticed two oversized banners advising Calabasas residents to vote by absentee ballot; one banner hangs on the tennis courts at the Calabasas Tennis and Swim Center and the other in the Calabasas Park area. The City seems to think encouraging residents to vote by absentee ballot is important enough to include a Robocall and follow up email from City Manager Tony Corrales.

When Haleh Naimi entered the race as a write in candidate, the city didn’t make an effort to let voters know. In fact, the city said it was Haleh’s responsibility to get the word out.

In Agoura and Malibu, ballots go to Norwalk to be counted. A city may choose to hold ballot counting in house, so to speak but when we called Malibu to ask who counts the votes, we were toldMalibu sends votes to Norwalk to avoid any sense of impropriety.

So, that begs the question. Why is the city handling its vote counting in-house with a committee that includes a member of the Planning Commission, of which candidate Alicia Weintraub is a member, as well as connection with incumbent Fred Gaines. It’s no secret Gaines and Weintraub are running on a de facto slate.

By encouraging vote by mail, those charged with counting votes can open ballots to check for damages or duplicates – as per a city email. What’s to stop the bean counters from advising candidates’ campaigns to see who is running ahead or even changing votes, bearing in mind changing a vote is a serious allegation.

The City of Calabasas has been less than transparent on a number of issues. The election should not be one of them.

(Beth Cone Kramer is a freelance writer. She lives in the Calabasas community.)