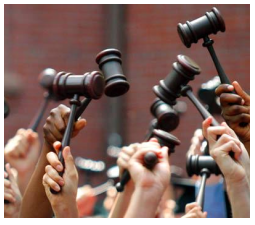 GELFAND’S WORLD--I didn't make up the argument about there being too many law school graduates. Several years ago, professor Paul Campos started pointing out that American law schools were admitting and graduating just about twice as many students as there were good jobs available. He started his own blog, Inside the Law School Scam to publicize the issue. His argument did not go down well with law school deans, but his logic was too strong to avoid.

As Campos pointed out, law school graduates who didn't get hired by big law firms were mostly doomed to a life of trying to pay back massive student loan debts, and without the kind of income that would make this practical. You can find Campos' more recent essays at the blog Lawyers Guns and Money, where he has been following the decline in law school enrollments. It took a while, but word of mouth and the free market induced college students to think twice before trying to become lawyers.

American law schools peaked at just over 50,000 new enrollees per year, and have been in a process of decline for several years now, with a current level of new law students at about 40,000.

There is a plausible prediction that the US is facing a shortage of physicians in coming years. This view is not exactly unanimous among either physicians or medical economists, but it is not unreasonable.

If you look at the number of doctors per capita, the US lags behind most European countries. The American disadvantage is almost a factor of 2 for some European countries, and around one-third for others. There is one curious anomaly in these calculations. The UK, Canada, and Japan also have lower numbers of doctors when the population size is factored in, but somehow manage to deliver excellent care.

The disparity between law school admissions and medical school admissions seems to have been determined by the difference in the way that law schools and medical schools came into existence. Since the early 1900s, the medical profession has been careful about creating and certifying medical colleges. Medical licensing is closely regulated in every state. In comparison, it is possible to create a law school and admit students without nearly as much regulatory oversight. Instead, states regulate who can practice law by holding bar exams for law school grads. You might view the process of legal education and licensing as kind of the wild west, where most students can find some law school that will admit them, finance their legal education by federally supported loans, and come out into the real world as big winners or big losers.

The problem that Campos exposed for legal education, and which is now being recognized as a more general problem, is that students in law schools, medical schools, and in many graduate programs rack up huge student loan debts because the federal government supports the loan programs.

It is, in a way, a perfect storm for the people of the United States in terms of access to quality medical care. We graduate relatively few new doctors, and those who do graduate have a strong incentive to go into high paying specialties because they start off their professional lives owing so much money on their loans.

This reflects the way our nation does policy and politics. The overall national interest would be better served by creating more family practice physicians, and probably by creating more physicians in general. The medical schools have been expanding their enrollment, but there is one additional problem. Graduation from medical school is not the end of training, but a midpoint. Medical residencies are the next step, and it is this process that is becoming a problem.

Seems strange, doesn't it? You can read about the problem in a discussion published in the New England Journal of Medicine. The congress put limits on Medicare payments to teaching hospitals, and this has limited the number of medical residents.

It's the way this country does things -- we have independent power sectors including the medical schools, the AMA, and our elected officials, and they don't always play well together. The NEJM article concludes with this comment:  "The absence of health-workforce planning, a hallmark of the freewheeling U.S. market economy, may come back to haunt policymakers, particularly when physician shortages become more apparent as the ACA's coverage expansion takes hold."

A few years ago, I offered a suggestion that could at least help improve the currently unfortunate ratio of family practice doctors to super-specialists. Since a lot of the problem is financial (the student debt burden), why not make medical education tuition-free, as it is in other parts of the world? A simple calculation shows that if the federal government subsidized each year of medical school by $100,000 then the total cost wouldn't exceed $8 billion a year. This is a pittance when compared to our overall national healthcare costs, and would go a long way towards improving on our family practice physician deficit.

By the way, graduate programs in the basic sciences often involve tuition coverage. Why not extend the program to medical education?