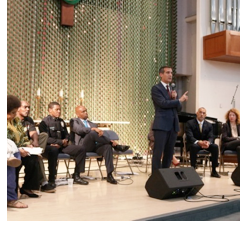 SOUTH LA--This week, Mayor Eric Garcetti convened a town hall meeting in South LA with hopes of addressing African-American concerns such as police brutality, lack of jobs and homelessness. The public meeting was held at Holman United Methodist Church on Adams (about a minute south of the 10 freeway) and drew a crowd of several hundred concerned citizens.

As soon as the Mayor began to speak, dozens of protesters immediately stood up and turned their backs on him. Later, chants of “Black Lives Matter” rang out, bouncing off the sanctuary walls louder than the church’s Sunday choir. Members of the church and other church-going folk in attendance quickly became frustrated with the non-stop disruption by the protesters.

Right then and there came an epiphany.

Should the Mayor have held a public town hall meeting at a church to begin with, especially knowing that the recent uptick in demonstrations suggests that a ruckus could occur?

Why subject the rest of the African-American community in attendance to the aggressive behavior of dissenters when it could easily have been predicted that these protesters would be there? Some said afterward that the Mayor anticipated that this kind of festering dissent would occur -- to such a point that the meeting would be abruptly cancelled – but he came anyway. Maybe the interruption was welcomed because he truly had nothing new to say.

Either way, the question is now raised -- was it appropriate for a political meeting to be held in a church? More importantly, is a public meeting held in a church bound by the same rules and regulations as regular church services? And what about people who are not religious at all?

On another note, the pastor of Holman, Kevin Sauls, was so visibly upset that he stormed out afterwards, stating sternly “Respect my house!”

This brings up another entirely different outlook toward the question of separation of church and state. Does Sauls have the credibility to lead a Black church (which is a favorite of the Mayor) even though he is not a Black American but is actually from South Africa?

There are those in the Black community who still have animosity toward African nations who sold their ancestors into slavery.

Earlier this year, Pastor Sauls rushed to Skid Row’s aid, opening his church doors on March 1 when an LAPD officer shot and killed an unarmed homeless man named Charly Keunang, better known as “Africa” because he was from Cameroon. Was Sauls’ eagerness to help solely motivated by the fact that Keunang was also not Black?

Furthermore, maybe there’s a disconnect between Pastor Sauls and Black Lives Matter since Sauls doesn’t truly identify as being Black.

Melina Abdullah, a BLM organizer, was overheard telling Pastor Sauls, “Don’t touch me, don’t touch me,” as Sauls attempted to prevent her from speaking aggressively toward both Mayor Garcetti and new Police Commission President Matthew Johnson (who is also Black) using one of the church’s microphones. Several large men rushed to the aid of Abdullah. This further annoyed Sauls who soon shut down the entire meeting because he had lost all control.

It should also be noted that Mayor Garcetti -- who addressed the majority Black audience earlier stating, “I agree….Black lives do matter” -- doesn’t even have an African-American male on his South LA staff. Yet he continues to court the Black vote as rumors spread about his higher political aspirations (think: Sacramento.) It should also be noted that the Mayor has several African men on his South LA staff. Maybe that’s the reason for his strong on-going connections to Holman United Methodist Church.

In addition, Pastor Sauls is also a Commissioner on the Los Angeles Homeless Services Authority (LAHSA) which funds non-profits. He’s only been the lead pastor at Holman since 2012. Sauls’ resume includes numerous connections and appointments to African religious groups. The question might then be raised: Can a non-African-American pastor qualify to lead a Black church in South LA -- especially when he goes against Black activists who are demanding to be heard as they declare that Black Lives Matter?

Is it time for Holman to get a real Black preacher instead of an import? Since the Mayor says “Black Lives Matter,” shouldn’t he hire an African-American man (or two) in South LA -- especially when we all know that BLM started because of the ongoing killings of unarmed Black men across the country?

Maybe next time, Mayor Garcetti can hold his town hall meeting at a local rec center so protesters can disrespect the state without the possibility of disrespecting a church.