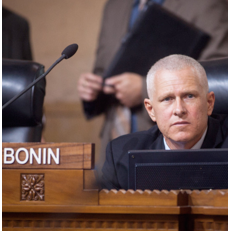 CITYWATCH REPORT SPARKS COUNCILMAN’S ACTION--Councilman Mike Bonin introduced a new plan this week to give the public a bigger voice in protecting the city’s urban forest after CityWatch published an exclusive story revealing that City Hall bureaucracy had failed to implement the councilman’s previous effort to accomplish the same goal.

Bonin (photo left) initially requested in January that the Board of Public Works provide 30-day public notice to communities when developers apply for permits to remove three or more protected trees on their property.

Bonin introduced his motion after developers late last year destroyed 58 protected trees in Sullivan Canyon to make way for a mega-mansion project but did not provide neighbors with any warning of the removals. The developers are the Namvar family, whose leader, Ezri Namvar, is currently in prison for his involvement in a Ponzi scheme that allegedly swindled tens of millions of dollars from the Persian Jewish community.

The controversial Sullivan Canyon project also has featured a geologic engineer claiming the developers attempted to bribe and intimidate state officials while trying to obtain permits for the their project.

Residents were outraged by the “chainsaw massacre” and also furious when they learned that neighbors do not receive – as a matter of law - special notification when a developer files to obtain the permits needed to cut down protected trees on their private property; protected trees are native species, like the Coast Live Oak and Southern California Walnut.

These protected tree permits are issued by the Board of Public Works at a public hearing.

Sullivan Canyon neighbors brought this to the attention of Bonin and the councilman’s January motion was intended to address this gap in the notification process. Specifically the motion asks the BPW to give local residents a 30 days advance notice of any public hearing at which the BPW will consider issuing a protected tree removal permit in their neighborhood. 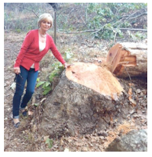 In May, the City Council unanimously voted to adopt Bonin’s motion. However, CityWatch discovered that the BPW, in fact, had not adopted any regulations to fix the flaw in the current notification system.

After CityWatch alerted the Councilman’s office to the lack of BPW action last week, Bonin’s staffers contacted the BPW. Board staff informed Bonin’s office that they had enacted regulations to address the councilman’s public notification concerns in June. However, the only tree removal permit and tree replacement conditions policies adopted in June applied to street trees, not trees on private property.

Bonin’s office scrambled to address this problem over the long weekend and the Councilman introduced a new motion at Tuesday’s City Council meeting. The motion requests the City Attorney to prepare and present an ordinance that requires a minimum 30-day public notice and public hearing for permit applications to remove three or more protected trees on private property.

CityWatch reporters will be keeping a close eye on the motion’s progress and the City Attorney’s office to ensure Bonin’s latest effort to give the public a greater say in protecting the city’s urban forest doesn’t fall through the gaps.

(Jack Schwada is a communications professional currently working in public and media relations and is a Los Angeles native.)