Local politicians quickly called for increased economic development, increased educational opportunities and jobs as a remedy to the increasing violent crime rate. These are all quite laudable ideas but the same people have been repeating the same response for three decades. The same remedies were called for after the riots of 1992. What is changed? Things have gotten worse.  You cannot police or incarcerate your way out of this crime problem.

As economic opportunities have expanded within the United States, African Americans have not been able to take advantage of them.  It would be easy and convenient to blame society but the fact is we must blame “our leaders”. The Black politicians that have been representing Black LA and Black America for the last 30 years have gotten rich while all Black America has continued to suffer. Is there a correlation? In my mind the correlation is clear.

The continuing rhetoric is not supported by actions and is merely a smokescreen by career politicians to prevent anyone examining their record of behavior. The reason I say 30 years is because the same people who were in power over the last three decades are pretty much still in power today at the federal, state and local level. Term limitations merely cause these politicians to rotate jobs.

An examination of the Los Angeles County supervisor seat that represents that represents South Los Angeles is a microcosm of the general failure of Black politics. The Los Angeles supervisor position is one of the most powerful elected offices in the state of California. For more than 25 years African-American politicians have held this office. Yvonne Brathwaite Burke and Mark Ridley-Thomas have held the seat continuously for more than two decades.

During this time little if anything has improved in South Los Angeles based upon the actions of these two elected officials. Both of them have managed, however, to place their children in elected offices at the state level. Now African-Americans can look forward to 25 years more of the failure that has been the history of Burke and Thomas.  The Democratic Party is developing a new generation of Black professional politicians that do nothing.

Rhetoric does not feed people, nor does it provide jobs. The high poverty rate that exists in South Los Angeles is a significant contributing factor to the level of crime that exists within the community. Fundamental economics dictate that where there is high unemployment there is also high crime. This is the development of crime-ridden communities. They are forced to prey upon those within their own community because they are locked in the community and so are their victims. 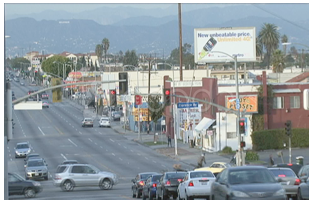 It is our responsibility to find answers outside of the continuing political morass that exist within our communities. Waiting for Black politicians to resolve our issues is simply waiting like a lamb to slaughter. We live in a capitalist democracy but the fact is that we spend more time talking about democracy than the capitalist part. There is a reason why capitalist is in front of democracy. Your ability to access democracy is dependent upon your ability to access capital.  When your capital is squandered so are your chances for democracy.  Even democracy has a price tag.

Black America has plenty of capital but the way we use the capital is a major factor in our inability to improve our own lives. If we are waiting for the government to improve our lives you may as well get a job selling ice cream in hell because it is not going to happen.

(Clinton Galloway  is the author of the fascinating book “Anatomy of a Hustle: Cable Comes to South Central LA”.    This is another installment in an ongoing CityWatch series on power, influence and corruption in government … Corruption Watch. Galloway is a CityWatch contributor and can be  reached here.)