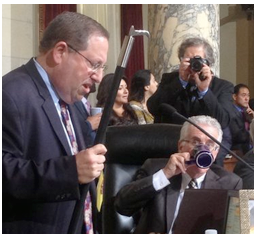 CITY HALL--It seems to me that ever since the LA City Charter Reform of 1999, the 15 members of the LA City Council don’t really have anything to do with the day-to-day running of the City of Los Angeles.

As a result, Mayor Richard Riordon was given the legal authority to appoint all Department Heads, as well as all members of the City’s various Boards and Commissions.  That’s right -- all of them!

So, assuming that the Mayor is capable of actually making all of these appointments, and further assuming some marginal degree of competence in the appointment process, we really don’t need a City Council for most issues of any interest to Angelenos.

Here are the legal requirements under the revised Charter: Councilmembers are required to meet at least three times a week, but it’s not specified for how long they have to meet. In exchange for this odious duty, each Councilmember receives about $200,000 a year in base pay, as well as a handsome budget/slush fund for each office, an excellent benefits package, and other goodies.

While there are some duties the Council has to perform, like voting on a budget, or seeing if they can pull together a 2/3 vote to override a Mayoral action, that’s about it for the mandatory stuff. And since virtually all City Council votes are 15-0 or 11-0, where’s the suspense in that?

While you could quibble about the other two elective offices, Controller and the City Attorney, they are really positions that are ancillary to the City’s day-to-day power structure, so I’m not including them in the mix.

Wow! Just think of the savings we’d achieve if we didn’t have to pay a City Council. We could save almost as much as the ‘transfer fee’ amounts – the “hidden tax” on us users that the City extorts from the Department of Water and Power each year.

I know you might think me harsh. But let’s take a look at what a Councilmember has to do to get in office and stay there: unhealthy breakfasts with whomever brought him or her to the dance, ribbon cuttings, handing out really pretty scrolls and pats on the back to the connected few, rubber chicken dinners to keep the troops quiet, and always, the endless schmoozing. Plus, they gotta “go along to get along” and never step on another elected official’s turf.

The sad truth is, Councilmembers have to do whatever’s necessary to raise the $400,000 to $500,000 in campaign contributions to win the office in the first place. So, you see, elected officials are already captive to the system before they even take the oath of office. I honestly do not envy them for that.

Take a look at a City Council Agenda. Twenty to thirty pages of indecipherable stuff, including heady foreign policy problems, voting on statements of position for issues that do not concern the City. Buried in those agendas are items that represent less than 5% of “real business” – such as the giveaways of public land (allegedly held in the public trust) to developers, granting variances and incentives to favored businesses like some in Koreatown or the Millennium Project in Hollywood which was recently reversed by a Court of Appeals. Gee whiz.

You think that maybe, just maybe, we could live without this supposedly “essential” layer of government?

What I find depressing is that most of these Councilmembers are not bad people, with some exceptions that I have pointed to in prior posts. While I don’t personally know most of them, there are some from Northeast LA that I have known since before they became important and got elected to Council.

Of course -- full disclosure -- I was one of the dummies who believed Antonio Villaraigosa’s smooth talk and helped him dump Nick Pacheco in one of the few upsets in recent LA election history.  My bad -- I got sucked in again. Villaraigosa became Mayor, and the rest is history.

I knew Gil Cedillo when he was running a labor union. He got a taste of real hardball politics when his assistant and the union president set him up for a fall. It was too bad because he is one of the few politicians I know who actually believes in doing something for the under-represented and underpaid constituencies in Los Angeles. And he’s taken a lot of heat for his positions.

Unfortunately, the path to being a professional politician (especially those on the “assembly-senate-council-and who knows what else” track) seems to include a path to livin’ large as well -- with predictable votes on the PLUM committee on behalf of developers.

I only know Jose Huizar from when he won the Special Election after Villaraigosa became mayor part way through his first term on City Council. Clearly, Jose had been groomed by the Democrats for the career politician path which began when he got on the LAUSD School Board. It was there that he discovered the heady world of being in charge of giving away (I mean, distributing) the billions of dollars in bond money for building new LAUSD schools -- even if there wasn’t enough money to staff many of them after they were built. It was good practice and it has served him well as the current chair of the PLUM Committee and a favorite son of the Billboard companies.

Mitch O’Farrell is a puzzle to me. He’s a genuinely nice guy who was a terrific community activist in our area -- he was primarily responsible for the creation of the Glassell Park Neighborhood Council. I can only assume that the necessities of gaining office and keeping it have forced him to toe the line and buddy up to the developer pals of his former boss, Eric Garcetti.

My takeaway is that all of these people, the good and not so good, are just folks with a jones to be politicians. Of course, we could talk about some of my not so favorite politicians like the glad-handing Tom LaBonge or the control freak, Ed Reyes…or that paragon of virtue, Dennis Zine. But I won’t.

The genesis of this article lies in my attempt to figure out why the City of Los Angeles is so majestically dysfunctional. Term limits, of course, and the 1999 Charter Amendments didn’t help. But there’s simply got to be more.

As I pore through the dusty records of the Charter, the Mayor and the LA City Council, please stay tuned for more on what I believe is truly wrong with the City. Our elected officials claim to run it, but are they actually virtual hostages to a deliberately dysfunctional system?

(Tony Butka is an Eastside community activist, who has served on a neighborhood council, has a background in government and is a contributor to CityWatch.) Edited for CityWatch by Linda Abrams