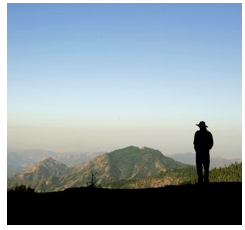 OTHERWORDS-Most of us care about conservation, at least a little. But sometimes we miss the forest for the trees — or in this case, the AC.

Take the hostel I recently stayed at in California.

All the lights in the hostel were compact fluorescents — those energy-efficient coils that use less electricity than traditional incandescent bulbs. I paid for a bed in the women’s dormitory and then walked up the outdoor staircase in the blazing desert heat to reach it.

Walking into the dorm was like entering a walk-in refrigerator. The air conditioner was set to 65 degrees. The room was empty.

So my hostel saved a few watts on light bulbs only to waste far more by over-cooling an empty room in the desert. That’s like going on a diet by turning down a Tootsie Roll and then eating two pieces of cheesecake.

It’s not just businesses or homeowners that make these mistakes. Every now and then, experts who should know better give equally incongruous messages to the public.

I recently visited Sequoia National Park, where several signs rightly point out that air pollution obstructs the view of the mountains from the western side of the park. Another sign on the park’s free shuttle bus notes that visitors can help the pollution problem by taking the shuttle instead of their cars.

That’s true. But like the compact fluorescent bulbs in the freezing empty room, it’s missing the point.

Most of the air pollution visible from the park doesn’t come from tourists driving between campsites and groves of Giant Sequoias. It comes from California’s nearby Central Valley, where much of the nation’s fruits, nuts, and vegetables are grown.

The valley has some of the worst air pollution in the country. Vehicle emissions play a major role, and it’ll take more than just a national park shuttle bus to clean those up.  (See aerial view of Central Valley smog (left). Photo by Stuart Rankin/ Flickr.)

However, the biggest source of pollution in the Central Valley is agriculture — particularly the end-of-season fires that some farmers set to clear out brush and plant trimmings. Although the state has reduced the pollution over the last decade, the view from the mountains reminded me of the smog in Beijing.

So when tourists see the smog over Sequoia and feel cheated out of a beautiful view of the Western Divide … then maybe that would be an ideal time to educate them about the pollution’s true causes and solutions.

Sometimes well-meaning efforts at conservation fall short, and sometimes they’re downright absurd. But with a little more reflection, we can all make smarter choices.

(Jill Richardson is the author of Recipe for America: Why Our Food System Is Broken and What WeCan Do to Fix It. This column was provided CityWatch by OtherWords.org.)  Edited for CityWatch by Linda Abrams.