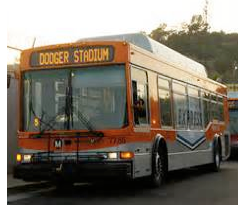 JUST THE FACTS-Using my newly acquired Senior Citizen Metro “Tap” Card, I decided to ride the public transit system from the West Valley to Dodger Stadium to avoid the 101 traffic congestion and the $20 parking charge at Dodger stadium. Frank McCord, the former owner of the Dodgers, still owns the parking lots surrounding Dodger Stadium and he’s making a fortune in parking charges.

I drove to the Pierce College MTA parking lot on Victory Blvd and parked my car. I then took a short walk to the Orange Line boarding area where I purchased $5 on my new “Tap” card and entered the boarding zone. I joined a group of teens – they were talking and listening to music, enjoying the wait for the bus.

At 6 pm sharp, the bus arrived and we all boarded and took our seats. There were plenty of seats to accommodate all the riders. We made stops along the way while traveling to the North Hollywood Red Line Station.

At one stop, a young man entered the bus and took a seat directly across from me. The strong odor of marijuana accompanied him as he took his seat. He remained calm but I noticed his eyes reflecting the recent ingestion of marijuana, his partially-smoked pot cigarette situated just above his right ear.  Being a member of the LAPD for so many years, it was obvious to me that the young man was loaded and very relaxed.

We continued toward the North Hollywood Red Line Station, and more people entered the bus as we continued on our way, making various stops. It was now moving toward 6:30 pm and I wanted to be at the game by the 7:05 first pitch. The young pot-smoker exited the bus along the way and hooked up with some other young men standing at a bus stop. He immediately removed the pot cigarette from behind his ear and lit up as our bus continued on its way.

We finally arrived at the North Hollywood Red Line Station. I joined the mass of humanity running to the Red Line boarding platform. A huge group of travelers were exiting from the Red Line as we entered the area. I boarded and we were soon on our way to Union Station.

While heading to Union Station, there was an elderly man on the train holding a hat and going from person to person begging for money from each passenger. The man did not score any money in my section of the train.

Once at Union Station, I saw a sign directing me to the Dodger Express Bus. But it was not much of an Express. There was only a small “bus only” section along Sunset Blvd, so we waited in line along with all the other traffic entering the stadium. The bus parked in a special area, leaving us to find the entrance for our seats.

The Dodgers have increased security at the entrance to the stadium with metal detectors and an army of uniform and plain clothes LAPD Officers. This is for the protection of everyone.

I finally arrived in my seat at 8:30 pm, joining the three other guys I was meeting. We joked and had a great time watching the game -- enjoying those expensive Dodger dogs, sodas and peanuts. With the score 2-1 and the Dodgers leading, it was time to leave – we wanted to beat the other 40,000 plus in attendance before the exits were jammed. One of my friends drove me to the North Hollywood Red Line Station. I boarded the Orange Line en route to the Pierce parking lot.

On the bus, a man dressed in a red and black outfit was having a loud argument with his lady friend.  She kept picking on him and the shouting grew louder and louder. They both exited the bus at the Van Nuys station and we continued on our way to the Pierce parking lot.

Then I got in my car and drove home.

1.  Not one Deputy Sheriff or anyone of authority was on any of the bus lines I rode. People were drinking various liquids and eating all sorts of food items on the buses. Neither is permitted on the Public Transit Lines.

2.  I did not feel safe on the Orange or Red lines. The visible presence of law enforcement    should be expanded and enhanced in order to provide a safe and secure environment for the public.

3.  The 2 ½ hours from the West Valley to Dodger Stadium on the Metro does have its benefits. You don’t have to fight the 101 traffic congestion and the cost is very reasonable.

I welcome your comments and suggestions for future articles.