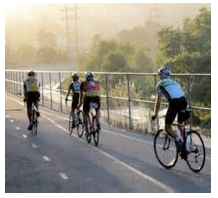 ROAD WAYS-Riptide: that backwash of water at the beach, not always visible from the surface, that grabs swimmers and pulls them the wrong direction, back out to sea to drown.

Bikelash: a vicious undertow, not always visible from the surface, that pulls cities back from the progress they’ve made, to drown in a sea of cars.

The first tactic of “bikelash” is to blame road diets and bike lanes for the traffic jams that have dominated our city for nearly eighty years.

The second tactic is to refute without examination any mention of real-world studies and analyses showing that road diets save lives and smooth traffic.

The third tactic is to shout and keep shouting, and scare city officials into giving way.

When you’re caught in a riptide, what you do is swim across it, not against it, so that you don’t tire yourself out while never getting any closer to the shore.

When you’re caught in a bikelash, what you do is show up in numbers to rebuke the reactionaries by your mere presence…not by shouting, spluttering, and waving your arms. Speak softly, and carry a big crowd. The shouters and spouters won’t listen to you no matter how rigorous your research. But the others sitting silent in the room will hear you. And the politicians will count heads and, thus, potential votes.

ACTION INFO: And so, if you want to save the Rowena Avenue road diet, which has already cut traffic crash injuries in half during its brief existence, show up at the Silver Lake Neighborhood Council meeting at Ivanhoe School, 6pm on Monday, September 14th.

The bikelash bozos will be there in force, hoping to reassert their right to speed, crush, and kill. You need to be there to reassert your right to live well and long, without your days being dominated by elitist drivers who value their bombast and impatience over your survival. Be there…or surrender your streets to the killers.

(Richard Risemberg is a writer. His current professional activities are centered on sustainable development and lifestyle. This column was posted first at Flying Pigeon)