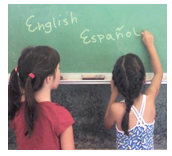 LATINO PERSPECTIVE-We’ve come a long way since proposition 227 … also called the English Language in Public Schools Statute … was approved in 1998.  This proposition changed the way that "Limited English Proficient" (LEP) students are taught in California; it basically removed bilingual instruction in our state.  But a bill that passed the California state Senate in June would reverse 227.

SB 1174, would place a measure on the November 2016 ballot to repeal Proposition 227 and allow local school districts to decide whether they want to bring back bilingual education rather than continue with the current system, which aims to move students toward full-time English use as quickly as possible.

Bilingualism in our country has always been controversial.  Using an ethnic or mother tongue in private or at homes is not the issue. However, the daily use of non-English languages in the public sphere has attracted many critics who argue that bilingualism is a private matter and shouldn’t be encouraged by public policy.

Parents often worry that bringing up their children bilingual will lead them to fall behind in their first language. But Pam Bremer, director of Obersee Bilingual School, explains that bilingualism not only makes children better linguists - it sharpens their brains in other ways too.

There is a lot of research to show that bilingualism gives children social, linguistic and cognitive advantages over their peers. Bilingual children out-perform their monolingual peers in study after study. Research has also shown that the advantages last well into old age, elderly bilinguals perform as well as younger monolinguals. Bilingualism is a kind of brain insurance, keeping your mind sharp well into old age. I’m tri-lingual myself.

Besides, 2015 is a much different world that 1998. We live in a global economy where competition is fierce. Bilingual students will enter the workplace with a significant advantage over their monolingual peers.

If the United States wants to continue to innovate, have a strong economy and continue to be a leader in the world stage it should encourage bilingual education.

California, and Los Angeles must lead the way and show the rest of the country how important it is to raise our kids knowing more than English. I know some of you may say how can we do this when many of our kids don’t even have a good command of the English language. Where will the money come from to pay for bilingual education? Will we lose our identity as Americans? Bilingual education will make our kids better English speakers and better Americans.

This State and the City of Los Angeles have an opportunity to show the rest of the country, and the world that in order to continue to be the strongest economy in the world, and lead it we need to have a robust, educated, and competitive workforce.

With the Presidential election looming, and the political rhetoric heating up about the direction our country should take moving forward, I think this is precisely the right moment to bring this issue to the forefront, and ask voters in California to repeal prop 227 and replace it with the California Multilingual Education Act (SB 1174).

Can someone ask Mr. Trump to start making sense please?