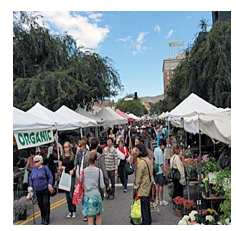 POLITICS AND PLANNING-In hip, and even not-so-hip, circles, markets, restaurants and cultural festivals across the country, “local” is in. Many embrace this ideal as an economic development tool, an environmental win and a form of resistance to ever-greater centralized big business control.

Yet when it comes to areas being able to choose their urban form and for people to cluster naturally – localism is now being constantly undermined by planners and their ideological allies, including some who superficially embrace the notion of localism.

In order to pursue their social and perceived environmental objectives, they have placed particular onus on middle- and upper-class suburbs, whose great crime appears to be that they tend to be the places people settle if they have the means to do so.

Nothing is more basic to the American identity than leaving basic control of daily life to local communities and, as much as is practical, to individuals. The rising new regulatory regime seeks decisively to change that equation. To be sure, there is a need for some degree of regulation, notably for basic health and public safety, as well as maintaining and expanding schools, parks, bikeways and tree-planting -- things done best when supported by local voters.

But the current regulatory wave goes well beyond traditional methodology. It reflects policies more akin to those central planners, who, as Chapman University researcher Alicia Kurimska suggests, dominated city planning in the once-massive Soviet bloc. There, theorists like Alexei Gutnov, lead author of the influential 1968 essay “The Ideal Communist City,”saw the city as providing “a concrete spatial agenda for Marxism.”

Gutnov acknowledged the appeal of suburbia – “ideal conditions for rest and privacy are offered by the individual house situated in the midst of nature,” but rejected the suburban model common in America and other capitalist countries. Gutnov favored high-density development, in part, because private homes might encourage people to focus on their families and their property rather than on the overarching collective dream of achieving socialism.

Sadly, our fair state, California, has become the new Vatican for a similarly minded approach, this one largely driven largely by environmental determinism. Under the provisions of 2008’s Senate Bill 375, the drive to reduce greenhouse gases will not be advanced through gradual technological improvement but by strangling the suburban preferences of the vast majority of residents.

In the process, local priorities now can be sacrificed for the predilections of our own central planners and a governor who has made little secret of his detestation of the very suburban “sprawl” that accommodates some 85 percent of residents in large U.S. metro areas.

In the past, the key decisions about density were left up to localities. Yet today, notes Ontario Mayor pro Tem Alan Wapner, powers once reserved for localities, such as zoning and planning, systematically have been usurped by Sacramento. The state determines policies and then employs, bureaucracies such as the Southern California Association of Governments and the Bay Area Association of Governments, to be its “smart growth” enforcers. “They are basically dictating land use,” Wapner said.

This shift disturbs not only conservatives, but suburban moderates and even some progressives. Nation magazine contributor and Bay Area activist Zelda Bronstein, for example, has attacked ABAG for its “insular, peremptory” style of decision making. She accuses local politicians and planners of caving in to what she refers to as “real estate Democrats,” essentially, local crony capitalists who would benefit from densification policies.

In the Bay Area, planners now mandate that all growth in the next 25 years will take place on four percent of the land, essentially contrary to the largely suburban growth that has characterized the region. It’s hard to see how this approach will do anything but spike real estate prices even higher.

This is not just a suburban issue. Even locals in San Francisco have opposed further intensification that they fear, justifiably, would turn the city into Manhattan West and destroy its physically stunning landscape.

For most of the population, residential high density’s benefits are even less obvious. Los Angeles has embraced ever-expanding density for at least a decade. This has occurred as the balance of power has moved from low- and moderate-density neighborhoods to an unholy alliance of developers and planners, who hope to feed on the city’s declining percentage of homeowners and the eroding suburban character of all but the wealthiest enclaves. 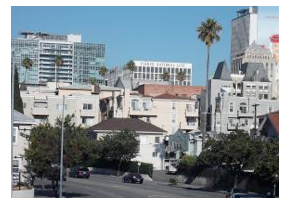 So how is this approach working? The density-oriented online publication Atlantic Cities celebrates these trends by hailing LA as America’s “biggest anti-sprawl success story.” But few look at how the denser Los Angeles is turning out. On virtually every measurement – poverty, unemployment, and low education results – Los Angeles lags not only relatively prosperous Orange County, but even statewide averages. Even the region’s elites admit that the area is now in secular decline.

Of course, some hipsters and empty-nesters love the new, dense Los Angeles, and they are welcome to enjoy it. Yet there is little evidence that most Angelenos, and particularly families, want to live cheek-to-jowl. Given the city’s existing dispersed employment pattern, few find public transit a reasonable option. Despite the spending of more than $10 billion on trains, the percentage of LA commuters taking transit is little changed from 1990. Large numbers also have been heading out of LA for well over a decade, paralleling the hegira from other dense regions, such as New York City.

Ironically, this approach may prove somewhat unnecessary and even counter-productive in terms of reducing global greenhouse gas emissions. As McKinsey has noted, there is no need to change the fundamental way people live to achieve continued progress on emissions. But this practical approach will not dissuade planners and their allies from seeking to control how people live. More pragmatic policies such as improved vehicle mileage, tree planting and encouraging working from home can certainly reduce greenhouse gases without seriously impinging the majority’s aspiration.

But rather than being just the latest California lunacy, the demise of local control is now going national. A cascading tide of U.S. Environmental Protection Agency regulations already threatens future developments, particularly those that cater to middle-class homeowners. In addition, regulations from the U.S. Department of Housing and Urban Development aim to force communities into inviting a designated number of poor people to achieve greater sociological and racial balance.

This soft Stalinism will be accomplished by suggesting that current housing patterns, despite no evidence of discrimination, have a “disparate impact” on the poor. HUD’s Julian Castro acknowledges that the real aim is to force middle-class communities into becoming instruments of top-down social justice. The Soviet Union may be history, but Alexei Gutnov would be proud.

Ironically, this targeting of suburbs is occurring just as minorities, who, like other Americans, generally prefer lower-density living, are flocking there. African American “strivers” have moved away from the city in increasing numbers in recent decades, notes the Brookings Institution. According to a University of Minnesota report, in the 50 largest U.S. metropolitan areas, 44 percent of residents live in racially and ethnically diverse suburbs, defined as between 20 percent and 60 percent nonwhite.

Immigration and the growth of other non-Anglo groups have accelerated this integration. Roughly 60 percent of Hispanics and Asians, notes Brookings, already live in suburbs, and more than 40 percent of noncitizen immigrants now move directly to suburbs.

Simply put, racial integration is occurring, as it should, both massively and organically. This trend reflects most people’s basic aspirations and desires. This social ascendency will not be helped by forcing upwardly mobile minorities to accommodate a policy that imposes on them again the social problems – poor schools, gangs, unemployment – they sought to leave behind.

This assault on local control could, over time, upset the political balance even in Democratic strongholds. This can be seen, ironically, even in the “greenest” areas, such as Marin County, north of San Francisco, where residents have objected to densification schemes, which, they maintain, would undermine the “the small-town, semirural and rural character of their neighborhoods” that drew residents there in the first place, noted one opponent.

Similarly, attempts to force density have already sparked uproars in other blue bastions, such as the Northern Virginia suburbs of Washington, D.C., Davis, Calif., and Boulder, Colo.

This undermining of the gentry’s liberal base, notes New York Times opinion writer Tom Edsall, can already be seen from HUD’s earliest forays into social engineering. Edsall notes that HUD’s dictates may have already shifted politics to the right in the affluent New York City suburb of Westchester County, an early target of the social engineers.

Ultimately, the assault on localism should concern not only free-market conservatives or fans of limited government, but anyone who values the basic ideal of personal choice and the right to pursue your aspirations. Such a struggle fostered the first American Revolution, and might well become a rationale for another, more peaceful grass-roots rebellion.

(Joel Kotkin is executive editor of NewGeography.com, the Roger Hobbs Distinguished Fellow in Urban Studies at Chapman University, and a member of the editorial board of the Orange County Register. He is also executive director of the Houston-based Center for Opportunity Urbanism.  His most recent book is “The New Class Conflict” (Telos Publishing: 2014).