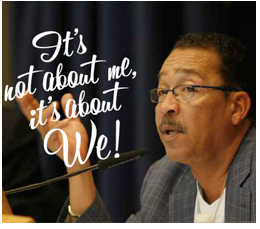 THE CITY-Well, you heard it first on CityWatch -- no sooner did we read Phyllis Daugherty’s piece asking if Herb Wesson had lost his gripthan proof comes to light that he has indeed!

Let me set the stage. For as long as anyone can remember, the LA City Council Planning and Land Use Committee (PLUM) has had three members, and in recent times two have been from Northeast LA:  Chair Jose Huizar (CD14) and his buddy Gil Cedillo from adjacent Council District 1. Previously, Ed Reyes (CD1) had been Chair for about as long as he was in office, with Jose Huizar as his sidekick.

This was important, as the two Northeast Districts controlled the bakeesh (polite for $$$) that rolled in from developers, contractors, and even Billboard companies. And in the really good old days, they were joined by Jack Weiss from CD5, famous for beating Tom Hayden by a few hundred votes, and even more famous for never meeting a real estate developer who’s money he didn’t covet.

Now, out of nowhere, an innocent sounding letter from the City’s Chief Legislative Analyst has appeared, captioned “Council Committee Meeting Schedule,” announcing that the President of the Council (Herb) has instructed them to develop the meeting schedule for 2015.

How innocuous can that be? Well, buried inside -- in an attachment listing the committee assignments -- was the startling news that there are now five members of the PLUM Committee, instead of three, as had been the case for a long, long time. And guess what? Harris-Dawson, Englander, and Fuentes are now joining Mr. Huizar and Mr. Cedillo in the newly expanded group.

Marqueece Harris-Dawson is from CD8, Mitchell Englander from CD12, and Felipe Fuentes is from CD7. The latter two are in the San Fernando Valley. The first agenda for the new PLUM Committee, that had already been cancelled a couple of times, simply lists the five members for the July 28 meeting as if nothing had really happened.

I smell a rat! Or, to be more accurate, indications that our pal Herb Wesson is having a “Grip Slip”, and has been jammed into adding two members to his good ‘ol boys club. By the way, if you look at the City Council website for anything about this...good luck. Nothing about any changes to the PLUM Committee.

So, what does this imply? Let’s see…District 7 is in the San Fernando Valley, District 8 is Bernard Parks old South Central District, and District 12 is Greg Smith’s old San Fernando Valley District. By way of background, Mr. Fuentes was Alex Padilla’s Chief of Staff, Mr. Englander was Smith’s Chief of Staff, and Mr. Harris-Dawson replaced the termed-out Bernard Parks.

I understand CD12 being on the committee. Mr. Englander already was the third member of the Committee, and undoubtedly wants to obtain the funds necessary to run for office to replace County Supervisor Mike Antonovich, who is termed out next year. I know, cynical of me, isn’t it? Maybe it’s simply a coincidence…assuming that you still believe in the tooth fairy.

The other two appointees, however, require reading the tea leaves…could there be a growing dissatisfaction with Council President Wesson? Could it be that Parks’ successor wanted a gimme?  Or is Harris-Dawson there to guarantee a three-vote majority? I guess the Koreatown developer deal didn’t go down too well.

Now, I don’t want to get all starry-eyed and think that the idea of Valley Succession is bubbling up again, but it is true that in recent times the Valley has been ripped off by real estate developers as much as those of us in Northeast Los Angeles.

Maybe these changes portend the rumblings of rebellion. Maybe Herb needs to accommodate more players. I don’t know…but one can dream, can’t one?

(Tony Butka is an Eastside community activist, who has served on a neighborhood council, has a background in government and is an occasional contributor to CityWatch.)