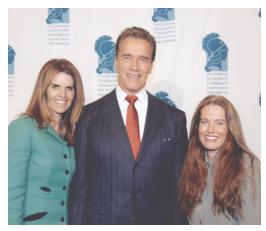 CALIFORNIA ACCESS POLITICS-Party crashing—or gate-crashing, as it is sometimes called—is an art form that I stumbled upon as a teen. I taught myself how to finagle into any event, anywhere, anytime. It required being part private eye, part actress and part chutzpah machine. I had to think outside of the box, throw myself into the role, and whip my brash plan into action. I assumed I would eventually fail, but that never happened. I was lucky in that way.

During my teens and early twenties, gate-crashing was just a hobby, albeit an unusual one. My high school and college friends were drinking at frat parties, smoking cigarettes in the woods, or killing time at the bowling alley, but I had grander plans. I preferred socializing with the rich and famous—movie stars, business moguls and heads of state—for the same reason people climb mountains: Because they were there, and miraculously I could get to them.

Then, I got bored. I was 24 and had met just about everyone who was anyone. The celebrity section of my bucket list was “done.” My bucket list had kicked the bucket. I’d crashed past The Secret Service more than once and frequented the Emmy’s, Oscar’s, and every elite award show in Hollywood. Plus, I had dated the only celebrity who had ever interested me: singer Tom Jones.

As I prepared for gate-crashing retirement, I looked inward and conceded that the main thrill had never been the “party.” It was the “crash,” the challenge, the feeling of blissful adrenaline. There was something magical about transforming into superwoman and becoming a rebel in high heels. I also realized that this pastime could be much more than glitzy gowns, socializing and security guards yelling “Wait. Come back here. I didn’t see your ticket.” It could aid me with goals.

So, my gate-crashing gears shifted. I attended fewer events, but always with an objective. I might need exclusive interviews [[http://www.therichest.com/rich-list/most-shocking/worlds-15-most-notorious-party-crashers/?view=all  ]]   for an article or a book. I might hope to snag an acting role, attract real estate clients, or sell my one-of-a-kind clothing designs. On other occasions, I craved famous supporters for nonprofit causes or wanted to push for legislation.

That leads me to “access”—political access. Politics is where the power is, a catchphrase that I realized was true after assuming public office in California, first as the member of the Greater Valley Glen Council and then as a Los Angeles city commissioner. Lawmakers are able to improve society through the initiatives they propose and sign, as well as the bully pulpits they mount. This is why meeting with them—usually at their office or at a fundraiser—is important. If a layperson wants to instigate legislation or lobby for pending bills, he or she may want to grab a little access.

But, snagging quality time with big-time politicians (especially Senators, Governors and Presidents) can be difficult for those who are not affluent. According to the Washington Post and Huffington Post, obtaining meetings with lawmakers is significantly easier for generous campaign donors as opposed to ordinary constituents. In one recent study, it was found that members of Congress are “more than three times as likely to meet with individuals when their offices [are] informed the [meeting] attendees [are] donors.”

Fundraisers present a similar roadblock. The cost to attend an event may be $25,000, $45,000 or even $100,000 per person. Gate-crashing, of course, costs zero, apart from a little stress and anticipation.

This brings me to Arnold Schwarzenegger and my pantsuit.

It was the mid-2000s when Schwarzenegger was the Governor of California. I needed access to him in order to lobby for a pro-animal bill and to suggest a statewide animal commission. The commission was to be tasked with advising public shelters on how to become “no-kill” (ending the euthanasia of dogs, cats, rabbits, et al.).

I put on my lucky pantsuit, got into gate-crashing mode and headed to Long Beach, California, where I knew the Governor and his wife, Maria Shriver, were speaking at the annual Women’s Conference. I arrived at the event late, and according to the conference program, Schwarzenegger had concluded his speech in the main hall. Although I assumed he’d left the building, I decided to double check.

Eunice Shriver was on stage. Behind her were bleachers full of important-looking folks in business suits, and before her was a smiling crowd. I confidently marched toward the backstage, but was stopped by a security officer.

“No one is permitted in this area,” he trumpeted like a drill sergeant.

I flashed a submissive nod and proceeded to disobey orders. A black curtain separated the make-shift backstage from the full access areas of the room. Like a mischievous teenager, I waited until the Drill Sergeant was not looking, ducked under the curtain and scurried out of sight. Stage hands stared at me, but I pretended to know what I was doing. I was skilled at wandering aimlessly with self-assurance.

Suddenly, Eunice concluded her speech, and the folks from the stage filed into the area around me. I was thankful because I no longer looked like a Cadillac in a bicycle shop. I was now just one of many guys and gals standing backstage in business suits.

“What exactly are we doing?” I summoned the courage to ask the lady next to me.

“We’re going to meet the Governor,” she replied. “I flew all the way from New York just for this moment.”

Meeting the Governor obviously worked for me, so I proceeded to bury myself in the group. I also purposely avoided eye contact with the Drill Sergeant and other security guards who led us into a private back room.

“Each of you are on the list. We have your addresses and will mail you a copy of the photograph you will be taking with the Governor,” a man announced. (Photo above.)

Oh, no, I thought. I was obviously list-less, and became anxious that my ruse would be exposed. Plus I knew getting a copy of the photo would be difficult at best. While waiting for the Governor and Maria, I learned I was standing among executives and board members from major corporations and business firms. These were big-timers with big bucks, the types who could afford those fancy fundraisers. Many had come into town for one purpose: to meet the Governor and say “cheese” with him. In order to fit in with the VIPs, I linked myself with the name of the real estate company where I worked.

“Charlotte Laws of Prudential. Nice to meet you,” was my greeting.

Schwarzenegger and Maria arrived with their children, and the dreaded moment arrived. I was wearing the exact same pantsuit as the Governor’s 13-year-old daughter. I was embarrassed. My 4’11” stature didn’t help matters much. I am pretty sure Schwarzenegger’s daughter was taller than me.

The Governor glanced over, and VIPs stared at me and cringed. I hid behind an executive from State Farm who was next to me in line. Like a good neighbor, State Farm was there.

“You are wearing the same outfit as my daughter,” Arnold smiled as he introduced himself to me.

“Bloomingdales. Teen department. On sale,” I said like a member of the “too much information” club. I don’t know why I said something so dopey, but I was on the spot and fell on confession as if it was my sword.

“Nice to see you again,” I shook the first lady’s hand. “We met once before.” I was not sure whether she remembered. An event photographer asked the three of us to pose for a picture; and snap, snap, snap. I would have a collectable photo. That is, if I could figure out how to finagle a copy.

By the end of the two-hour event, my gate-crashing caper had been a success. I got that all-important access. I was able to converse with the Governor, who expressed interest in the pro-animal bill and later signed one into law. Plus, I was able to pull the event photographer aside and exchange contact information in order to assure I would receive the picture.

There was more good news. Schwarzenegger arranged for me to meet with his cabinet secretary and senior advisor in Sacramento to discuss my commission idea. The first meeting led to a second and to a dozen phone conversations. Unfortunately, in the end, my commission proposal was rejected. The Governor said it was due to budget constraints.

I blame the pantsuit.

(Charlotte Laws, Ph.D. is the author of the new memoir, Rebel in High Heels.  She has been an actress, private detective, weekly NBC commentator and a CityWatch contributor. You can follow her on Twitter @CharlotteLaws )