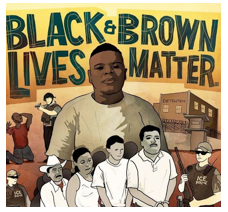 LATINO PERSPECTIVE-According to the Los Angeles Times, over the last five years in LA County, coroner's data show that Latinos, who make up about half of the county's population, also represent about half the people killed by police. Of the 23 people fatally shot by law enforcement in the county this year, 14 were Latino.

The Times raises an important question that they didn’t fully answer. The question is:  why the deaths of Latinos in LA County by the hands of the police haven’t drawn as much attention as the deaths of African Americans by the police?

For the majority of Latinos in Los Angeles, family is everything. They take care of each other. They live close to each other and socialize together. They also stay in touch with relatives in Mexico or other Latin American countries, send money to them and visit whenever possible.

They are also hard working, and know how to throw a fiesta. Entertainment is very important to them. Religion and traditions are valued. They respect hard work, aren’t shy about manual labor and most of them are Catholic--but tradition is more important. Also education is valued, and those who come to Los Angeles from another country do so for better opportunities and quality of life.

As you can see, Latinos don’t need much to be happy: family, work, great food, and tradition is enough to have a pleasant life, but more often than not this leads to complacency.

As the LA Times tells it, “The muted reaction to the deaths of Latinos in confrontations with police tells a larger story: Black Lives Matter is starkly different from Brown Lives Matter.”

It’s true that this disparity is rooted in historical context. Police shootings of African Americans, men in particular, outweigh those of any other group in LA County. But it is because of this that Latinos need to do more to raise the bar. They must raise awareness that we need to keep an eye on the actions of the police. When they commit abuses, the Latino community should learn from their African American brothers and say “enough is enough.” We are not going to tolerate police brutality and abuse any longer.

As Latino political power and influence grows, our ways need to change as well. With great power comes great responsibility, they say. I call for the Latino community in Los Angeles to begin a conversation:  start looking within ourselves and figure out what kind of role we want to play. We must learn to use our gain in numbers to see positive change in our society--not just for Latinos but for all Angelinos, and for all Californians.

I think this is the right time to start this conversation. We can’t be complacent, we need to rise up to the challenge and take control of our destiny and our democracy, because democracy is not a spectator sport, it’s not a free ride.

In the movie “Fair Game”, there is a quote that I think is important for Latinos to remember. In 1787, as Benjamin Franklin left the Constitution Hall after the last drafting session, he was stopped by a woman on the street. She asked, “What manner of government have you bequeathed us?” Ben answered, “A Republic, madam. If you can keep it.”

We are strong and we are free from tyranny only for as long as each and every one of us remembers their duty as citizens. Whether it’s a pothole at the end of your street or the deaths of residents at the hands of police, we must speak up, we must ask questions and demand answers. We must be active participants in our democracy. Complacency is our enemy. This is the only way our lives will matter.