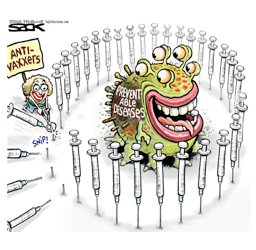 GELFAND’S WORLD-Last week, Governor Brown signed the bill that makes it mandatory for children to be fully vaccinated in order to enter the public schools. Senate Bill 277 (SB277) removed the option that parents used to have, which was to opt out if they had a personal or religious objection to vaccination.

We might very well have expected a deafening response by those in opposition, but it's becoming increasingly obvious that the hard core of the anti-vaccine group in California shows two major attributes: (1) They are passionate about their views and are willing to travel long distances to make them known, and (2) there aren't very many of them.

Based on their turnout at the state capital during the debate over SB277, you might have thought that they represent a large number of people who can generate real political influence, but the evidence we now have points in the opposite direction.

Onlookers who attended the legislative debate over SB277 spoke of the highly visible anti-vaccine protestors. The anti group dressed themselves in red in order to be recognizable, and filled corridors and hearing rooms. Crowd estimates of more than a thousand, perhaps even 1500 or more, were common. They stayed for hours and even days, demonstrating a rare level of dedication to their cause.

Still, even a couple of thousand demonstrators does not constitute an overwhelming number in a state of nearly 39 million people. They represent one out of every twenty-thousand Californians. Even if we were to imagine that for each demonstrator at the capital there were another hundred who didn't come, that's still a small fraction of the state's population, something around half of one percent.

The anti's have made a name for themselves due to their flair for dramatic language and their skilled use of hyperbole. They have made use of anti-vaccine tropes that have long since been rebutted. Some of them still even believe that vaccination is linked to the onset of autism in toddlers.

The evidence that the movement is dwindling, perhaps only suggestive at the moment, comes from the anti-SB277 rally that was held in Santa Monica on July 3. Television news stories and YouTube videos show a fairly meager crowd. KTLA (channel 5) referred to the demonstrators as being in the hundreds. Other stations and the LA Times gave similar estimates.

Considering the very substantial mandate that SB277 puts on parents, it is a little surprising that the protestors are as few and far between as we have seen. After all, the anti-vaccine movement views the act of vaccination as something of an abomination, capable of creating real damage to the youngest of children. They like to throw around the term "vaccine injured" to refer to neurological deficits in children that, according to science, probably have nothing to do with vaccination at all.

But the anti-vaccine people are true believers in the dangers of vaccination. They are horrified of being forced into having their children immunized, and they make this clear to the press, television, and people who read their blogs. It shouldn't be surprising that anybody holding this belief would join a protest at the capital and then participate in a protest march immediately after the bill was signed into law.

That's why it's surprising how few people were at the Santa Monica protest. There were of course other protests around the state, but we haven't seen any evidence of a widespread, mass movement. Compared to the pro-immigrant marches of a few years ago, the anti-SB277 protest was small stuff.

Amusingly enough, there were two people who have managed to make public fools of themselves, one by getting tossed in jail, the other by being a public fool.

Marlon Andrino is accused of spray painting anti-SB277 graffiti in Beverly Hills and other places. Whether it is he who did it or someone else, the message was plain: "4 every kid afflicted a public figure will die SB277." That seems pretty threatening. Andrino was arrested on felony vandalism charges.

The public fool is Jim Carrey, who called Gov. Brown a fascist for signing the bill. Carrey also made some ignorant remarks about mercury and aluminum as components of vaccines. To think that I spent all those years learning bio-organic chemistry and biochemistry, only to be upstaged by a guy who can distort his mouth and eyebrows in really amazing ways.

There are two somber sidelines to the legislative win. In Washington state, a woman on immunosuppressive medication died of pneumonia. An autopsy showed that the cause of her death was a previously undetected measles infection. Apparently in immune compromised people, it is possible to become infected by the measles virus yet fail to show the typical measles rash. The inadequate immune system makes it easier for the virus to spread to the lungs.

Another case in California is equally sad. A child is suffering from a rare but real side effect that comes from having a case of measles. The virus can linger in the brain for years, finally becoming evident as a destructive infection that ruins parts of the brain and invariably leads to death. 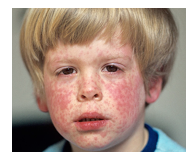 There is one other measles story that is pertinent to this discussion. A recent study shows that getting the measles as a disease, rather than getting the shot, results in damage to the immune system that can last for a long time after the fever goes away. It seems that an active measles infection does damage to a particular set of cells in the immune system. They are the cells that remember "we've had this particular infection before." Loss of these cells makes it that much easier for those recovering from the measles to come down with something that they would otherwise be immune to.

Researchers investigating this question looked at populations who lived through measles epidemics prior to widespread immunization, and found that post-measles children were more likely to die from something else, compared to children who had avoided measles.

As I've written here before, there is a moral issue to vaccination. If enough of us are immune to something like the whooping cough, then we won't spread it to our families and neighbors if we get exposed. We simply won't get sick. It can be a horrible condition for babies and young children. The best way to protect them is for the rest of us to be immune by getting the shot.

We seem to be a forgetful culture. The bubonic plague killed about one-third of the population of Europe during the long and painful fourteenth century. Smallpox killed perhaps a third of those who contracted it, and left permanent scars on those who survived.

And this leads to one last story. Back in 1905, the US Supreme Court heard a case in which the city of Cambridge, Mass passed a law requiring adults to be vaccinated against smallpox. One man refused. The Supreme Court decided that it is in the power of a state or city to protect the lives of its residents through mandatory vaccination. The Constitution forbids some police methods such as torture, but vaccination as a public health practice was deemed to be within the powers of government.

To quote another famous Supreme Court aphorism, the Constitution is not a suicide pact. Your right to be secure in your person against an intrusive government is balanced against the community's right to protect all of its residents from your infectious disease. The public health and our need to preserve it have always been societal rights that trump an individual's personal desire.

This is the main counterargument to the one currently being floated by the anti-vaccine groups. They have been arguing that healthcare decisions belong to the parents, not the state. Our culture accepts this position with respect to decisions that don't bear on the public health. You can raise your children in a religion of your choosing, cut their hair long or short, and provide them with cell phones or not as you like. None of these choices result in the kid up the block coming down with a life threatening illness.

The parental autonomy argument is a sham according to our culture and our law. The state legislature was right to reject it. The governor was right to point out that vaccination, despite rare side effects, is an effective and a necessary element of public health.

The anti-SB277 organizers have made all the standard threats and predictions, including doing a ballot initiative. The news media have recently discovered that fully two-thirds of Californians support the idea of school immunizations. That does not bode well for the initiative, even if it gets on the ballot.