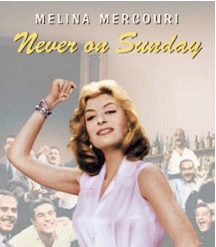 GREEK VOTE, A PERSPECTIVE-According to the lyrics from the memorable theme to Never on Sunday (enjoy the trailer), it is OK to kiss in Greece except for Sunday.

However, on this past Sunday, July 5th, Greek voters invited the EU to kiss them. I need not mention the part of the anatomy, though.

Contrary to some extreme views, this does not mean the end of western civilization or the EU, but neither can it be shrugged off by the major trading blocks around the world. The Asian markets have opened way down as of the wee hours of the morning in North America.

There are also adverse strategic implications, not the least of which involves Russia’s ruling sociopath, Vladimir Putin.

Payments on the EU debt extend out to 2055, but the lion’s share is due before 2040 and €17bn over the next two years. It may as well be ten times the amount – the Greek banks are almost out of cash.

A switch to a new currency can take any country up to two years with careful planning.  There is no meaningful planning underway and the Drachma would be worth a small fraction of the Euro in any event. All foreign debt is payable in the national currency of the lenders.  Greece would conceivably have to issue trillions in Drachmas to buy Euros in order to liquidate its current debt alone.

Initially, the Drachma might provide short-lived relief, but inflation will be certain to overwhelm the economy.

80% of the economy is in the services sector, and a large portion of that is from government spending.  In other words, Greece has little to sell to the rest of the world.

Tourism, which accounts for 17% of the Greek economy, has been the only bright spot in the crisis. However, Greeks should not count on it if their country devolves into social unrest, a likely prospect.

Tourists will be targeted by thieves for their cash and cards.  Service providers will operate a black market to avoid paying taxes.  Drachmas may not be readily accepted by merchants. Visitors will have to carry wads of Euros, Pounds and Dollars, since ATMs will be unreliable.

The EU nations will eventually be able to absorb the losses from a Greek default, though not without some pain and political repercussions.

The greater risk is social chaos and the possibility it could turn Greece into a haven for terrorists.  Face it, terrorists love to fill a vacuum created by disorder. Also, one cannot rule out armed fighting between extreme socialists and capitalist factions.

A repeat of the Greek Civil War of 1946-1949 would be possible.  80,000 were killed in the conflict.  The Truman Doctrine and Marshall Plan restored stability and stopped the spread of Communism. I am not suggesting that scale of death would occur.  The Greek army would intervene to maintain some degree of order, but thousands of deaths could still result.

He has already expressed a desire to “help” Greece.

Even though the Russian economy is stretched, Putin has the power and popularity to push his people to make greater sacrifices in the name of Mother Russia. To be honest, it would be a strategic windfall for Russia if it were granted port facilities by Athens in return for financial support. Putin would hold the high ground of the Eastern Mediterranean.

Greece would not only cease to be a functioning member of NATO, but become the Mediterranean base Russia always desired. Such a development could leave Ukraine helpless as its southern trade route would be compromised.

Israel would have to sweat, too, surrounded by an increasingly hostile set of neighbors.

We can only hope the Greeks will consider the long-term implications of their decision and not let the “no” vote become a Greek Tragedy.

(Paul Hatfield is a CPA and serves as President of the Valley Village Homeowners Association. He blogs at Village to Village and contributes to CityWatch. The views presented are those of Mr. Hatfield and his alone. They should not be construed to represent the opinions of the VVHA or the residents of Valley Village, individually or as a group. He can be reached at: phinnoho@aol.com. ) Story editor: Linda Abrams