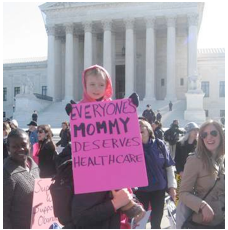 SCOTUS WATCH-For proponents of the Affordable Care Act, Thursday’s Supreme Court decision upholding federal subsidies on federally created exchanges is cause to celebrate. Once again, the ACA has survived a potentially fatal challenge.

The significance of today's decision, however, also extends into the future. Because of how the Supreme Court reasoned in the case, a future president opposed to the ACA (including all of the current crop of GOP contenders) will not be able to reinterpret the law to deny subsidies to low- and middle-income taxpayers in the future.

One of the arguments rejected by Chief Justice John Roberts' majority decision is that the ACA is ambiguous and that, as a result, the Court should defer to the construction of the relevant administrative agency, here the Internal Revenue Service. (The IRS read the statute to allow subsidies.) Roberts said it was the justices' job to read the statute for themselves without deference to the IRS.

While the court rejected the administration's argument on this point, Obama's loss bodes well for the long-term viability of the Affordable Care Act.

If the court had deferred to the IRS construction of the statute, the next president, should he or she be opposed to subsidies, could have pushed the IRS to reconsider the law. The IRS could have determined then that the ACA did not make subsidies available on the federally created exchanges.

That would have gutted the law -- even without opponents having to pass anything from Congress.

By insisting that the subsidy question was too important for the court to defer to the agency's interpretation, Roberts betrays his usual preference for judicial supremacy and skepticism of the executive branch. Yet in doing so he takes the subsidy question off the table for future presidents.

A President Rubio or Bush won't be able to reinterpret the ACA to deny subsidies on the federally created exchanges. The ACA has now been authoritatively and conclusively read by the Supreme Court to allow subsidies.

Chief Justice Roberts has not only saved Obamacare once again. He's also given the law strong protection against future attacks.

(Adam Winkler is professor of law at UCLA and blogs at Huffington Post … where this piece was first posted.)