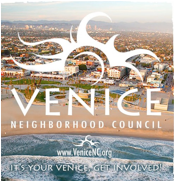 NEIGHBORHOOD POLITICS-The Venice Neighborhood Counci called for the release of the video regarding the death of Brendon Glenn, a member of the homeless community that lived at Venice Beach.

By a vote of 13-0-1, the VNC approved the resolution sponsored by member Mike Bravo which called for the release of the video recording.

The board also entertained discussion of the proposed Venice Coastal Zone Interim Control & Interim Control Internal Control Ordinanc.  The proposal was rejected by a 9-4-1 vote of the VNC.

Attendees were divided on a controversial resolution urging the Los Angeles City Council to endorse SB 277, which would remove the ability of parents to file a "personal belief exemptions" to receive vaccines for specific communicable diseases prior to admission to any private or public school, child care center, day nursery, nursery school, family day care home, or development center. After considerable public comment, the motion was defeated by a vote of 6-5-3.

An application for a change of use (3018-3025 Washington Blvd.) of an existing 762 square foot retail space with 4 existing parking spaces into a 1,454 square foot restaurant with a beer & wine conditional use (CUB) was also entertained by the board. It had been rejected by LUPC and the VNC voted 6-4-2 to deny the project as well.

Jesus "Chuy" Orozco was introduced as the new field director for the 11th Council District Office who will represent Venice. Mr. Orozco replaces Cecilia Castillo who served previously as the council office representative.

Senior Lead Officer Kristan Delatori of the Los Angeles Police Department urged Venetians to lock their homes and vehicles and not to leave valuables such as phones, tablets, wallets and other items in vehicles.

The Venice Neighborhood Council holds its regular meetings on the third Tuesday of the month. All Venice stakeholders are urged to attend.