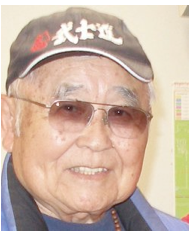 LA PROFILES-One of the best things about writing about Los Angeles and the West is the interesting people I get to meet and talk with about their lives. Today was no exception.

This morning I had the pleasure of meeting Dr. Jack Fujimoto, a longtime resident of Sawtelle Japantown in West LA.

Sitting in a quiet corner at the back of Teddy’s Cafe at Pico and Bundy, Dr. Fujimoto generously shared his life story and wisdom in a free ranging conversation about Japanese Americans, life in the West and change.

At 87, Dr. Fujimoto is a picture of the clear minded octogenarian I hope to be someday. Born in 1928, Masakazu Jack Fujimoto was the first Asian American to serve as president of a major college or university in the mainland U.S. But as he shared with me, the job didn’t come easy, given the subtle discrimination that was part and parcel of the times in 1977 when he became president of Sacramento City College.

“I was in Kauai on vacation with my family when this guy from Sacramento called and said, ‘Would you like to be considered for the presidency?’ It was clear he wanted me to say no. But I came back from Kauai and interviewed and then interviewed again, and finally, I got a call from the only African American on the Board and he said, it’s yours.”

In spite of the subtle discrimination he experience in the hiring process, Jack is proud of what he achieved during his time at Sacramento City College. He points proudly to his support for gays and lesbians at the school (at a time when this was uncommon) and to a program he started for learning disabled students.

Born in National City to an Issei father and Nisei mother, Jack calls himself a second generation and a half Nisei. The oldest of six children, he grew up in the Encinitas and Cardiff areas where his father was a truck crop farmer selling peppers, tomatoes and lettuce. “He was basically a sharecropper because he couldn’t own land since he wasn’t a citizen.” One of only about a dozen Japanese Americans in his high school, Jack’s youth was rudely interrupted by Executive Order 9066.

The order which prescribed certain areas of the U.S. as military zones, was signed by President Franklin Delano Roosevelt on February 19, 1942. It forced some 120,000 Japanese and Japanese Americans into internment at ten concentration camps in the interior in the West. “The order was signed February 19th and by May 19th I was in Poston Camp in Arizona. Poston was probably the largest of the camps. We were allowed to carry only two bags of hand luggage. What would you take, I used to ask my students? I was 13 years old. It was terribly traumatic.”

“At Poston the camp school was terrible. I had a teacher who we called Prune Face. She looked like a cartoon character from the time. But I got a good Japanese education and I also worked part-time at the camp in the motor pool, in the machine shop and sometimes we went off camp to Parker. I was pretty big and could take 60 pound blocks of ice and put them on the train to move to camp. Another year I worked in agriculture picking watermelons. The best part was when you picked a watermelon and dropped it and got to eat it.”

Jack told me that there was some resistance to Executive Order 9066 from people like Fred Korematsu. And there was a lot of quiet, unsung resistance from those in the camps.

As much as he has been through, for Jack, one of the most important events in his life was “when my old man said I don’t expect you to follow me into farming. I wanted to be a teacher and I would have been a terrible farmer. I couldn’t make a living at it. I can teach but I can’t farm or garden.”

Despite his experience interned at Camp Poston from 1942 to 1945, Jack volunteered to serve in the U.S. military during the Korean War. After studying Japanese at the Defense Language Institute Foreign Language Center in Monterey, and at a counter intelligence school in Baltimore, Jack traveled to Japan where he served from April 1950 to July 1952. “Those were terrible times, when North Korea invaded the south,” he told me. “I was one of the privileged ones, out of a unit of 15, I was able to stay in Japan during the war. I’d have had my tail shot off, the North Koreans decimated entire companies of soldiers.”

In 1952, Jack returned to California and settled in Sawtelle. “Under the McCarran-Walter Act my parents got naturalized so they could buy property. The tanomoshikō, a sort of credit union (or traditional Japanese mutual financial assistance group) helped a lot. Restrictive covenants were still in place and realtors would be careful what they showed you. When we were relocated to Poston, my parents left their house and everything to a Mexican employee. They lost everything. Other people knew to put their house in trust with the banks or groups like the Red Cross which took over the Japanese Institute of Sawtelle during the Executive Order.

When I was in high school in Encinitas I was to be the star of the high school play. I lost that, but think about the guys who were at Berkeley and Stanford, a semester away from graduating, and they couldn’t graduate. It was traumatic for the young people. For everyone.”

About resistance to the Executive Order, Jack said “The Japanese American Citizen League told us to go to the camps. Others said no. Some moved east of Highway 99 but then they had to move again. Lots of Issei parents had no desire to stay in the U.S. Of the 120,000 who were interned the government probably paid reparations to only about 50,000 or 60,000 alive in 1990 (others put the figure at $1.6 billion in reparations to 82,219 Japanese Americans who had been interned and their heirs).”

Regarding Sawtelle Japantown, Jack told me that for a long time he had thought about all of these Nisei and Sansei and the stories they have to tell about their lives in the neighborhood, in the camps and beyond. This idea gave birth to the oral history project at the Japanese Institute of Sawtelle.

“Then last year some of the younger people said let’s create a virtual presence for Sawtelle Japantown that recognizes the historic Japanese character of the area.” Concurrently the group sought City Council recognition of the area bounded by Santa Monica Boulevard to the north, Pico Boulevard to the south, Centinela Avenue to the west and the 405 freeway to the east as “Sawtelle Japantown.” On February 25, 2015, the Council unanimously approved the designation.

With all the change taking place in Sawtelle Japantown, Jack hopes to see further efforts to recognize throughout the neighborhood, the contributions and experiences of Japanese Americans. One idea is to create a monument at the Japanese Institute of Sawtelle that commemorates the spot from which Japanese and Japanese Americans were gathered in 1942 for their transfer to the internment camp at Manzanar.

Discussing the transformation of popular Sawtelle Japantown, Jack points to the increased densification and the decline of Japanese American institutions like Troop 39 of the Boy Scouts of America and the Bay Cities Gardeners’ Association. It is also no secret that there are plans to build housing on the Japanese Institute of Sawtelle site as well as two adjacent properties. All the more reason, in Jack’s view, for the community to push for a memorial to the deportees of Executive Order 9066, and preservation and beautification efforts like the planting of cherry blossoms (sakura) along Sawtelle Boulevard. As Jack relates in his 2007 book on Sawtelle Japantown, it was local residents like Miyoko Shimahara who in 1994 initiated the campaign to import sakura for the beautification of Stoner Park.

I don’t always love Mondays but Jack Fujimoto made this one special. Thank you Jack for sharing your story and for the history lesson.

(Joel Epstein is a senior advisor to companies, law firms, foundations and public initiatives on communications strategy, corporate social responsibility (CSR), recruiting and outreach. He is a contributor to CityWatch and can be contacted at [email protected] This piece was posted first at SawtelleJapantown.com)