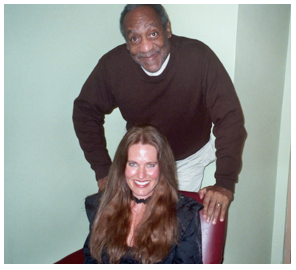 IN MY OWN WORDS-“Did I ever drug you?” Bill Cosby joked when I entered his dressing room at the Paramount Theatre in Oakland, California, in February 2005. He was performing at the venue, and it was “between shows.” I was accompanied by my husband and stepdaughter. (Photo: Author Charlotte Laws and Bill Cosby.)

His comment was meant to defuse tension because a woman had just come forward, saying she was drugged and raped by him. It was obvious that Bill was feeling uneasy about negative media attention. I wondered if his decision to hang out with me and my family one-on-one for 45 minutes was part “damage control.” I was not his close friend; I was more of a friendly acquaintance. Perhaps “friendly acquaintances” can expect more attention when 34-year-old secrets are involved.

Bill knew that I knew. I could feel it. I had known the truth since that memorable night in 1981. Bill had drugged my close friend, whom I will call Sandy, and then had sex with her.

Bill met Sandy in the casino at the Las Vegas Hilton around 1979 or 1980. She was in her late teens or early 20s, thin and medium height with hazel eyes and straight brown hair that fell just below her shoulders. They immediately began a consensual intimate relationship. At the time, Sandy was sexually adventuresome, dating a number of men around town.

Sandy was not a would-be actress and had no major career aspirations, other than possible enrollment in the U.S. military. She did not date Bill with an eye toward professional advancement, and to my knowledge, he made no promises of this sort. She simply liked his company. She also came to appreciate the few hundred dollars he gave her following each date.

“I don’t know why Bill always leaves me money,” she told me. “He must think I’m a hooker. But I don’t want to tell him the truth, because I like getting the cash.”

Sandy had no job and lived in a downscale apartment in a dreggy section of town. Those extra dollars came in handy at rent time.

Sandy introduced me to Bill in 1980. I was 20 years old. The three of us sat alone in his dressing room at the Las Vegas Hilton. He coached me on my college plans. He was the incarnation of the wise and protective patriarch, a role he would play on a national scale when “The Cosby Show” launched in 1984, making Cliff Huxtable a household name. I particularly appreciated his commitment to causes and his down-to-earth nature. He was not only an incredible talent; he was a caring and generous soul.

She did not react with enthusiasm. But then again, she was not a bubbly person. Her temperament was more like a panther: sleek and even-keeled.

Then he looked at me and smiled, “What’s your favorite clothing store?”

“Suzy Creamcheese,” I said. This was a popular local boutique.

“If you help Sandy grow her hair down to her waist,” Bill said to me, “I will buy you $1,000 worth of clothes at Suzy Creamcheese.”

Sandy never grew her hair. She was not motivated by money. But she did come to me one morning a year later to tell me that something bad had happened. Bill had drugged her. She was not angry. She was baffled, stunned, even shaken by the experience. Plus, she felt betrayed.

“Bill drugged me last night, and then had sex with me,” Sandy confided. “I just don’t understand it. It’s not like I would have said no to anything.”

He had given her two pills and said, “These will relax you.” She trusted him and swallowed them. She figured they were vitamins or herbal medicine. They did not relax her; they flat-out knocked her unconscious.

“He didn’t need to do it,” she repeated. “I just don’t understand why.”

Did it turn him on to see a woman “out cold” or was this all a mistake? Maybe Sandy’s body had reacted to the pills in a bizarre and unexpected way. I was willing to give Bill the benefit of the doubt, although Sandy felt his actions were intentional.

She did not view the encounter as rape, because she was already in an intimate relationship with him. I likewise did not categorize it as a sex crime, because it was Sandy’s experience, and she had a right to define it any way she wished. I was only the bystander, the friend, the shoulder to cry on. Of course, now that I am older, I look back and realize that when a woman is unconscious, she cannot ever consent.

Sandy had no idea what happened to her that night. She knew it involved sex; she could tell by the way her body felt afterward. It never occurred to either of us that Bill might be drugging other women. We both assumed the encounter was a “one-off.” After all, Bill was charming, intelligent, attractive and famous. He did not need to sedate women in order to secure dates. He could not possibly have a dark side.

I moved from Las Vegas in 1982 and fell out of touch with Sandy. But I stayed in touch with Bill. One evening we were alone in his dressing room.

“Have you seen Sandy?” I asked.

It occurred to me that the “drugging date” may have been their last.

In an effort to elevate Sandy a few notches, I disclosed, “She was never a hooker. You probably thought she was.”

“Really?” He was expressionless. I could not tell whether he already knew or was surprised.

“She needed the money for rent,” I added. “That’s why she never told you.”

He nodded, indicating he understood and was copacetic with it.

In 2005, I had arrangements to attend Bill’s show in Oakland and to go backstage with my family. But days prior, I got wind of the allegations against Bill. I was shocked and in a quandary. For the first time, I realized that Sandy’s ordeal had not been a “one-off.” Plus, I was a witness. I could corroborate this woman’s story. But should I? Was it better to leave it to the courts and law enforcement? After all, I was not a victim. Bill had always treated me with respect. He had given me advice and been generous with his time. He had never offered me a pill.

I was also unclear how to handle the backstage mingle. Should I cancel? Should I question or confront him? Should I be polite? I chewed on this for hours, finally deciding to keep the arrangements.

After Bill tossed out his opening line, “Did I ever drug you?” I took a seat across from him in his Oakland dressing room. I introduced him to my husband, Charles, and my stepdaughter, Sibylla.

“What style do you think this is?” Bill asked in an upbeat way, alluding to the room’s furnishings.

“What do you do, Sibylla?” Bill asked.

“I’m an astrologer,” she replied.

“Sibylla is going to tell you if you’re going to be a success,” Charles said. Bill laughed.

“Charles is not only funny,” I finally spoke. “He can recite entire Shakespearean plays.”

“You like that, don’t you?” Bill grinned at me. He loved the idea that poetry had swept me off my feet.

“You can make up anything at this point, and she’ll think it’s Shakespeare,” Bill winked at Charles.

The conversational tone had been set; it was friendly and humorous. There would be no confrontation or interrogation. We calmly discussed politics and national news stories — except, of course, that certain news story about a certain comedian. It was the elephant in the Art Deco room. We also talked about the criminal justice system and Bill’s favorite subject: education.

Ironically, Bill was concerned that certain reform schools might be pumping youngsters with drugs.

Could you check into this for me?” Bill asked, since I wrote a newspaper column.

I did not say, “I know someone else who has been pumping youngsters with drugs!”

I was usually a rebel, outspoken and controversial; but on this particular evening, I opted to be pleasant. I gave Bill a friendly goodbye hug, still uncertain whether I should come forward. It was not long before a number of women corroborated the first woman’s account about drugging and rape, and I assumed my testimony was not needed.

In the years since, I’ve tried to reach out to Sandy to get further details of her story. I even hired a private investigator. But I’ve never been able to track her down. Her full name is common, and some people aren’t as easy as a Facebook search. But I’ve never forgotten the conversations we had, or the ones I had with Bill later.

Sexism was apparently the broom that had swept their allegations under the collective American carpet. It took a male — comedian Hannibal Buress — to peel back the wrapper, to put the issue in the spotlight and make the public examine it.

Edmund Burke once intimated that bad things happen when good people do nothing. Since I want to be a good person and I don’t want bad things to happen, I have decided to tell my story. I realize I am late. I realize I am not a victim myself. And I realize I did not help my sisters in 2005 when they needed me most. But I also realize that it is better to be late than silent.

Although Bill has refused to comment on the allegations, I’d like to pose some questions, echoing Sandy’s sentiment of “Why?” Why drug a willing sexual partner, especially when you are a man with an otherwise good and caring heart? Why risk a successful career and a phenomenal legacy on a couple of stupid, little pills? And why turn a country that loves you into one that is no longer sure?

Please tell us why.