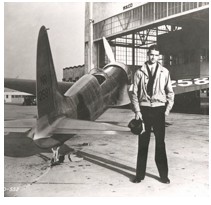 NOT YOUR GRANDFATHER’S LA-Howard Hughes, Jr. moved to Los Angeles from Texas in 1925 to leverage his diverse talents and knack for invention. That he did and more. By September 1945, the end of WWII, Hughes Aircraft Company employed 80,000 workers designing and building planes, making Hughes the largest employer in the region. By the 1960s his products—spacecraft, radar systems, the first working laser, and commercial satellites—were changing the world.

Today his legacy of innovation lives on in Playa Vista, where his former headquarters stands at the center of LA’s most bustling business center, where one can find media companies, ad agencies, university-affiliated institutes and start-ups working alongside the world’s most-established tech giants.

LA’s economic hubs, like Playa Vista, were not created overnight. They were born from the imaginations of a long list of business leaders, developers, and planners who took advantage of the city’s climate, growing population, and expanding road network to grow LA outward from its center in downtown.

For most of the nineteenth century, Hughes and investors like him benefited from abundant tracts of vacant land that allowed them to develop the infrastructure needed to fulfill the nation’s demand for planes, automobiles, movies, and space and weapons programs.

World War II accelerated LA’s economic development in two important ways. First, public works projects, including the expansion of the airport and Port of LA, increased rapidly to keep up with the flow of goods and people around the LA basin.

By the 1990s, globalization brought economic development and job creating opportunities to regions of the world willing to offer better tax and regulatory climates than California. Over time LA’s multiple economic centers began to shrink, the impact of which can be seen today throughout LA’s communities.

Revitalizing LA will not happen through outward expansion. LA must reclaim underutilized space to foster economic and job growth. A 2014 report commissioned by the City of LA shows that the City owns more than $3B worth of real estate, and significant properties are currently being underutilized.

New York City’s legendary planner Robert Moses, who mastered the planning game and setting the right conditions for economic growth, always saw the value of investing in “the public realm,” and Angelenos should, too.

Following are three districts in the region that are doing just that.

● Century Boulevard District is known as the “Gateway to LA” because it’s the first impression millions of travelers from Los Angeles International Airport (LAX) experience of LA. Driving east from LAX, visitors will see an urban landscape that lacks economic vitality. Driving north into Playa Vista and south into El Segundo gives the opposite impression.

This is about to change. The Airport Commission, with the backing of the business and labor communities, recently approved plans that will invest $4B into LAX’s ground transportation system. This will include an automated train that will connect passengers to the terminals, a new passenger meet-and-greet facility, a rental car center, and LA Metro’s planned Crenshaw Line station at 96th Street/Aviation Blvd. These projects will begin to free up hundreds of acres of airport-owned land for public/private development (retail and commercial) and incentivize the local business district to transform Century Boulevard into a pedestrian-friendly urban landscape that will also include improved bicycle connectivity to transit options.

Plenty of vacant and low-cost commercial space is now available for biotech, finance, technology, and media companies looking for a location that puts them in close proximity to major freeways, future public transit, the beach, and affordable neighborhoods.

LA City’s recent passage of a reduction of the business tax could be one more incentive to help this along.

● San Pedro is the City of LA’s waterfront and home to the region’s largest job generators – the Ports of LA and Long Beach. Increased global competition, labor disputes, and a shrinking job base have forced San Pedro to look beyond its reliance on the goods movement and consider other economic opportunities around tourism, technology, and science.

What San Pedro needs is an economic driver that creates a seven-day-a-week economy, and AltaSea’s efforts to transform a 100-year-old pier at the Port of LA into the world’s only “ocean-based ideas and innovation center” could do just that. Within a decade the world’s leaders in marine research, biomedical and aqua-farming could be housed in San Pedro helping to transfer research into private business opportunities.

Port Tech LA has already helped established San Pedro as a place where entrepreneurs, innovators, and investors can come together to advance clean technologies, and many more opportunities exist for business investors looking to provide solutions for the Port’s operations, logistics, and security.

These investments will connect people, ideas, and resources in a region that also happens to have affordable housing.

● Downtown LA is now a valued residential community offering cultural events, dining, retail, entertainment, and sporting events. It is also the second largest office market in the region, but only home to two percent of the region’s workforce. Fifteen years ago the City Council passed an adaptive reuse ordinance to create more housing and City (and County) leaders should build on that success by leveraging its underutilized real estate, such as the LA City Mall, Parker Center, and Lincoln Heights Jail, to foster the development of a more robust business community.

Judging by the number of cranes in the sky, we can see that downtown’s economic revitalization is fully underway, and with the right alignment between government, academia, and industry, the creation of well-paying jobs will follow.

LA is no longer Dorothy Parker’s “72 suburbs in search of a city.” It is a landscape of diverse and unique communities that, with the right public/private investments, will attract a new generation of investors and entrepreneurs looking to turn their ideas into successful businesses that sustain LA’s economic vitality.

After all, while we all know that Howard Hughes’ passion for aviation and the silver screen are legendary, it was his visionary investments in real estate that carry his legacy into the 21st century.

(Michael Kelly is Executive Director for The Los Angeles Coalition for the Economy and Jobs. This column was posted originally at C-Suite Quarterly. It was published most recently at Fox and Hounds Daily)