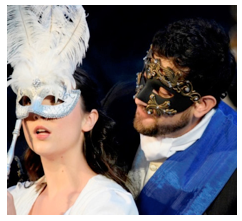 GELFAND’S WORLD-Much Ado About Nothing is a complex play to present, but delivers a mighty emotional wallop if done well. It's considered juicy enough that two major filmmakers, Kenneth Branagh and Joss Whedon, have done their own versions in recent years. To give you a taste of the new, live production at the Theatricum Elysium San Pedro Rep company, let's consider what one critic said about the Whedon film version (Sheila O'Malley writing in the Roger Ebert site):

Doug Moston, acting teacher and Shakespeare scholar, had this to say to his classes about Shakespeare's language: "If you think a line is bawdy, it’s bawdy. If you don’t think it’s bawdy — it’s only because you haven’t worked it out yet." Joss Whedon and his capable cast have "worked it out." Every line shimmers with double entendre. Sex roils underneath every moment, every motivation, every misunderstanding and every rejoinder.

Now imagine that experience up close and live, right in the room with you. The TESPR version is presented in the style known as immersive theater, and the current production  delivers.

Immersive theater puts the audience in the same playing space as the cast, whether it be a courtyard or the benches at a wedding. You find yourself in the drama rather than just looking at it from a distance, sometimes walking through a set, and sometimes sharing benches at a wedding with the players.

I've been following TESPR as a new addition to southbay culture for the past year, as detailed previously in these pages. I've been viewing it as a work in progress, and as a study in how art develops. I would say that Much Ado is a serious step forward in that process and definitely something to experience.

The play itself centers around 2 sets of young lovers. Beatrice and Benedick are the prototype for the couple who secretly love each other but can't bring themselves to admit it. As the audience, we await their surrender to the truth and to each other. Shakespeare (and TESPR) will eventually deliver, but not before a lot of fun and a lot of difficulty.

The lady Hero and her young suitor Claudio find each other, are driven apart by a jealous plot engineered by the villain Don John, and eventually will be brought together in a marvelous ending.

One test of live theater is its ability to create that great moment when the hair on the back of your neck stands up, and the audience members around you are simultaneously cheering and crying. That's what the final scene of Much Ado is supposed to provoke. It's why live theater exists. I don't think you will be disappointed at the way the TESPR production winds up.

Rachel McVay stands out as Beatrice. The part requires balance between the coldly sarcastic and the inner warmth that eventually has to come out in this role. It is important not to go overboard in either direction in the early going. As the plot develops, the actress playing Beatrice has the opportunity of demonstrating both strength and love. McVay does not disappoint.

Her partner is Benedick, played by Sam Fleming. Fleming previously played Sir Lancelot in TESPR's Lady of Shalott. He is developing as an actor, and shows a substantial singing voice when given the opportunity.

The young lovers Hero and Claudio are played by Mary Emfinger  and Mark Kopitzke. Mark has played a number of lead roles in the past year, including Oedipus, and is showing enough in the way of dramatic chops that we may expect to see him graduate to television or film one of these days. Emfinger is getting her first major lead role with TESPR, having previously played the daughter Clara in Wouldn't it be Lovely, the TESPR adaptation of Pygmalion.

Corissa Pacillas-Smith is appealing as the servant Ursula, while A.J. Sciafani plays the servant Balthasar. In this adaptation, he is allowed to toss in lines from other plays ("Now is the winter of our discontent") in what appears to be the insertion of in-jokes for the more knowledgeable members of the audience.

What sets TESPR off from other companies is its ability to mix elements of ballet and song with the essential dramatic text. One particularly effective moment comes fairly late in the action, when monks sing a dirge to the supposedly dead Hero, accompanied by the guilty and grieving Claudio. It was an operatic moment.

Company regulars Chris Lang and Paris Langle contribute entertainingly, the first as Don Pedro and the latter as Don John and as the policeman Dogberry. The police force is played as a Keystone Kops routine, complete with music suitable for a silent film presentation.

One other element that is unique to TESPR is the use of the small indoor playing area for dance performances that are done in the immediate proximity of the audience. Director Aaron Ganz seems to like moving the plotline and the emotional arc of the play by inserting a dance. It is a way for a young couple to find and express their love. In one previous production, a dance element was used to express the demonic possession of the main character. It is a technique that should be used sparingly and carefully, but can be effective, as we saw in Lady of Shalott and in the current performance.

In the performance I saw, the two outdoor scenes were somewhat interrupted by an unseasonal chill wind, which added its own acoustical effects. Such is the experience of watching live performances outdoors. I can remember a much worse effect some years ago, when the Chicago Symphony Orchestra, performing in its summer setting, had the noise of cicadas filling most of its otherwise outstanding performance of Tchaikovsky's Sixth Symphony.