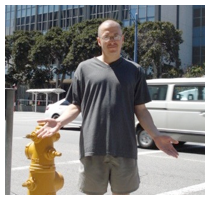 GUEST WORDS-It was three-and-a-half years ago, and yet I remember with perfect clarity the group of police officers waiting at the northeast corner of Ocean Blvd. and Magnolia Ave. before coming through the crosswalk toward me. I wouldn’t have noticed them had the group not been so large. The one flicker of a thought I had about them was that they must be going to lunch. (Photo: The author shortly after Sheriff’s Deputies released him.)

But the first to reach me asked what I was doing and whether I had been taking pictures of the courthouse. And almost before I could say “Is there some sort of problem with taking pictures of the courthouse?” more than a half-dozen Los Angeles County Sheriff’s deputies were fanned out in a circle around me, with one of them holding my hands behind my back while another frisked me thoroughly enough to twice ensure that there wasn’t a weapon in the crotch area of my cute little jogging shorts. “You were suspiciously doing something gave us probable cause to contact you,” was the reason I was given after being compelled to answer a battery of questions. That “suspicious activity” was my seeming to photograph the courthouse across the street. (I hadn’t been, but that is beside the point.)

I didn’t understand what was happening at first, except that my civil rights were being violated. The other thing I knew was that I was going to get a good story out of this. It turned out to be a two-parter, in fact, largely due to the willingness of Sgt. Maurice Hill, the lead officer in my detention, to speak about the matter the following day. And what I wrote near the end of that story is that I wouldn’t be filing a lawsuit.

But over the next couple of months—when a colleague was wrongly detained by the Long Beach Police Department for taking photographs, when I learned that the Sheriff’s Department engaged in such detentions as a matter of policy, when I found out about a post-9/11 bit of paranoia that requires officers to report legal, innocuous behaviors such as taking pictures “of no apparent esthetic value”—I joined a lawsuit then being prepared by the American Civil Liberties Union (ACLU) for two other plaintiffs, guys who were far more serious photographers than myself and had endured even more serious abuses of their civil rights.

After a delay so inordinately long that it was referenced in a January Los Angeles Times editorial entitled “When LA County delays court settlements, it delays justice,” this month the Los Angeles County Board of Supervisors finally signed off on a settlement that changes Sheriff’s Department policies and training vis-à-vis photography.

Just how badly Sheriff’s deputies were trained to violate the First and Fourth Amendment rights of photographers was brought home to me when I spoke with the unit commander of the courthouse, whom I contacted upon learning that a letter signed by then-Sheriff Lee Baca and sent to the National Press Photographers’ Association contained falsehoods about by detention.

During our conversation, the commander affirmed that deputies were trained to detain and pat down photographers for “potential terrorist” activity such as photographing a courthouse, even prior to attempting to identify the individual or find out why she is taking photographs. He said this was because officers are “harped on [that] Homeland Security says a courthouse is a hardened target,” and so when an officer is alerted to the possibility that someone is taking pictures of a courthouse, “in the back of his head he’s going, ‘Oh, potential terrorist taking pictures of the courthouse,’ okay? When I deal with a potential terrorist, first thing I gotta do is make sure there’s no weapons. How do I do that? I’m gonna pat him down, for officer safety.”

This view of photography as potential terrorist activity comports with Los Angeles Police Department Special Order No. 11, a policy document promulgated by the Department of Homeland Security, the Department of Justice, and the Major Cities Chiefs Police Association as part of their “Findings and Recommendations of the Suspicious Activity Report (SAR) Support and Implementation Project” and adopted by law-enforcement agencies across the country.

According to Special Order No. 11, among the non-criminal behaviors “which shall be reported on a SAR” are the usage of binoculars and cameras (presumably when observing a building, although this is not specified), asking about an establishment’s hours of operation, taking pictures or video footage “with no apparent esthetic value,” and taking notes.

(Also listed as behaviors to be reported are “Attempts to acquire illegal or illicit biological agent (anthrax, ricin, Eboli, smallpox, etc.),” “In possession, or utilizes, explosives (for illegal purposes),” and “Acquires or attempts to acquire uniforms without a legitimate cause (service personnel, government uniforms, etc.).” Special Order No. 11 does not distinguish between how these behaviors should be handled and how (e.g.) photography should be handled.)

The issues in play resonated throughout the country. George Will wrote about our case in the Washington Post. The article I wrote bringing attention to LAPD Special Order No. 11 went viral, becoming the most-read piece in the history of the Long Beach Post, attention that “freaked out” the LBPD so much (as deceased Long Beach Post co-founder Shaun Lumachi put it after multiple discussions with the LBPD about me) that LBPD’s Media Relations Detail refused ever again to speak with me for any article, with two separate public information officers telling me this bit of blackballing was approved up through the Chief’s Office. (Ironically, that chief was Jim McDonnell, now LA County Sheriff. He had told me that the LBPD was “on-line” with all instructions contained in Special Order No. 11, “as is everyone else [i.e., other police departments] around the country.”

Although it was Special Order No. 11 that raised people’s hackles, because they learned about it in an article documenting the LBPD’s implementation of such policies, the LBPD was singled out for negative attention.)

As part of the settlement in Nee v. County of Los Angeles (the shorthand name for our suit), the Sheriff’s Department is now required to train deputies assigned to patrol, along with all new recruits, that all members of the public “have a First Amendment right to observe, take photographs, and record video in any public place where they are lawfully present”; and emend policy to that deputies are prohibited from “interfering, threatening, intimidating, blocking or otherwise discouraging” photographers from taking photos or video, so long as no other laws are being violated in the process.

“The training established by this settlement should ensure that photographers around Los Angeles County—as well as the general public—can exercise their right to free expression without unnecessary harassment,” says the ACLU’s Peter Bibring, the lead attorney on our case and a swell guy. “We are heartened by the County’s willingness to address this issue with a common-sense approach that will become standard practice from now on.”

One of the main spurs to my joining the lawsuit was my experience with Sgt. Hill. I came away from my conversation with him feeling that, in a profession undoubtedly plagued by power-hungry individuals who have little genuine regard for the civil rights of the people they have sworn to protect and serve, Hill was exactly the kind of person we need on the job.

But that was the point. Even the right people for the job will do the wrong things if the training and the policies informing their sense of duty misguides them.

The day after my detention Sgt. Hill was honest enough to admit—on the record—that I probably should not have been subjected to a pat-down search. He didn’t have to do that (and most officers in his position would not have). He could have consented to talk with me and declined to comment on this point. But as a thoughtful, honest individual, he chose to do otherwise. Clearly, this was not a man who would intentionally violate anyone’s civil rights. And yet he had done so just a day earlier.

Now that the Sheriff’s Department has updated its policies and training, good deputies like Sgt. Hill (who is now retired from law enforcement) won’t be led to believe that there is cause to detain some guy standing on a public street taking pictures of a building.

In a legal system glutted with abuses of power, bad laws, and frivolous lawsuits, I like to think of the case of Nee v. County of Los Angeles as a minor improvement, one I hope will have a ripple effect far beyond the county I call home. American jurisprudence is ugly, slow, and sometimes downright unjust. It is not, however, impervious to change.

(The author: Trapped within in the ironic predicament of wanting to know everything (more or less) while believing it may not be possible really to know anything at all, Greggory Moore is nonetheless dedicated to a life of study, be it of books, people, nature, or that slippery phenomenon we call the self. And from time to time he feels impelled to write a little something. He lives in a historic landmark downtown and holds down a variety of word-related jobs. HIs work has appeared in the Los Angeles Times, the OC Weekly, The District Weekly, the Long Beach Post, Daily Kos, and GreaterLongBeach.com. This piece was posted most recently by RandomLengthsNews.com)