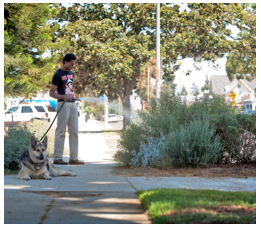 NEIGHBORHOOD POLITICS-John Parker of Los Angeles waters his parkway garden, where he grows several different kinds of herbs. On Wednesday the Los Angeles City Council voted to let people grow other types of edible plants, like fruits and vegetables, on their parkways. Maya Sugarman/KPCC.

The LA City Council has voted to allow Angelenos to plant fruits and vegetables in their parkways - that strip of city-owned land between the sidewalk and the street - without a permit. Fruit trees, however, will still require a permit.

Until now, planting anything other than grass or certain shrubs on that strip required a $400 permit, and homeowners were often fined for not complying. But the ordinance approved Wednesday says people can replace shrubs or grass with edible plants like fruits and vegetables, as long as they follow the city’s guidelines for landscaping parkways.

The problem is, updated guidelines aren’t ready yet. City staff still has to revise them to include rules for edible plants, like how far they must be from the curb and how tall they can grow. Those guidelines must then be approved by the city council.

At Wednesday’s meeting, Councilman Bernard Parks asked staff to pay special attention to how planting fruit and vegetables in parkways might affect sidewalk access for drivers, pedestrians and people with disabilities.

Stalks of corn or passion fruit vines planted too close to the curb, for example, might make it impossible for people to get out of their cars.

The rule change is the culmination of years of advocacy by community groups. They have been pushing the city to make it easier for residents -- especially in poorer, crowded neighborhoods -- to grow their own food. The city council began working on Wednesday's rule change nearly two years ago.

Mayor Eric Garcetti now has 10 days to approve the ordinance. Assuming he does, it will take effect roughly 30 days later. Councilman Parks said he hopes that the revised landscaping guidelines will be ready before then.

(Adrian Florido is Community Health reporter for KPCC  … where this piece was first posted.)