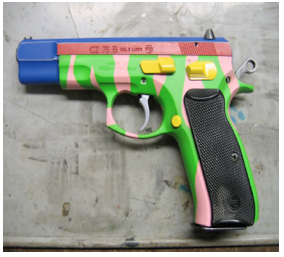 RUSS REPORT-In September 2014, Governor Jerry Brown signed into law the Imitation Firearms Safety Act (SB 199) that will take effect in January 2016.  Los Angeles City Council passed a similar ordinance in 2013 on the heels of SB 1315 sponsored by California State Senator Kevin De Leon in 2012 that would give the City the power “to enact and enforce an ordinance or resolution that is more restrictive than state law.”

De Leon says that toy guns should be painted bright colors or feature fluorescent strips to make them distinguishable as toys.

“In a stressful situation where it’s a question of using deadly force, police officers are not going to be able to get close enough for a detailed inspection,” said De Leόn. “These toy guns need some sort of marking that will make them harder to mistake for real firearms.”

De Leon’s political hype got this law passed by playing on the emotions of those who lack the experience that police officers encounter on a daily basis.

De Leon’s Press release touted, “According to law enforcement, one of the primary dangers posed by imitation firearms is that such guns are used by children and young adults who may not comprehend the seriousness of displaying them around unsuspecting law enforcement officers or around other armed individuals.  As a result, officers and community residents can find themselves in precarious situations when they are unable to distinguish imitation guns from handguns and assault weapons. By making toy guns more obvious to law enforcement, SB 199 can help families avoid the terrible grief of losing a child.”

De Leon’s comments are not only naïve but jeopardize the safety of the public, at large, as well as all law enforcement officers.

Craig Lally, President of the Los Angeles Police Protective League (LAPPL) adamantly disagrees with De Leon’s logic, and said, “The LAPPL continues to oppose the implementation of a law forcing all imitation firearms to be painted bright colors. Our officers already regularly encounter fully operational firearms that have been painted these same bright colors. In order to maintain the safety of the public, our officers have to assume that any weapon, regardless of the color, is fully loaded and capable of shooting live rounds.”

While it is certainly a real tragedy when any child is injured or killed because a police officer mistook a toy gun for a real gun, the burden of responsibility should not remain, solely, on officers and/or individuals who seek to defend themselves against imminent danger or death.

Parents should know the huge safety risks involved before investing in toy guns for their children and those children should not be allowed to roam the streets carrying them.

The laws for purchasing ‘imitation firearms,” or toy guns, can carry very harsh fines for those who manufacture, sell or own any toy gun that is not bright orange or green. However, there is no law to prohibit persons from manufacturing, selling or owning REAL guns that resemble toy guns. Criminals are already painting real guns to resemble toy guns.

Los Angeles Police Department (LAPD) Chief Charlie Beck, who supports De Leon’s law, should have the sense to know how “thin” SB 199 really is. In 2013, De Leon recalled a conversation with Beck who told him, “in his 37 years in law enforcement he never encountered an instance where a criminal painted his firearm to look like a toy.”

REAL guns can be painted with duracoat finishes in almost any color one can imagine- bright pinks, reds, purples, oranges or camouflage.  Duracote can be used without a respirator because it is, in effect, spray paint in a can- no need for a compressor, dryer, or bake oven and in a couple hours that brightly colored gun will be ready to shoot.

Last September, after a two-month undercover operation, Police in San Leandro raided a home where they seized more than 500 marijuana plants, eight pounds of processed pot, $45,000 in drug money and two assault rifles that had been made to resemble toy guns.

At the time, San Leandro police spokesman, Lt. Robert McManus told reporters, "It is frightening to know that AK-47 assault rifles capable of penetrating body armor worn by law enforcement officers were made to look like toys.”

The bright colors and cute little cartoon insignias are extremely popular among gun owners and make REAL guns appear as toys. With gun assaults against police officers up 55% from 2014, there is a growing problem that no one seems to be addressing.

The fact that a police officer or a potential crime victim could hesitate before taking defensive actions could mean the difference between living and dying.

Last year, Sean Kirkendall from the Brady Center to Prevent Gun Violence, said,  “Currently there’s no legislation that keeps real-looking guns looking real. There hasn’t been a tragedy or enough tragedies from this to get the attention it requires. It’s a reasonable thing to expect — real guns aren’t allowed to look like toys.”

All laws have unintended consequences and it is up to legislators to examine ALL potential consequences before laws are passed. In this instance, a law aimed at protecting children from accidental shootings by police officers may end up causing injury and death to others whether it be by a brightly painted toy or a brightly painted firearm.

Lally, of the LAPPL, held firm in his opposition to SB 199, stating that, “Officers cannot and will not rely on the color of a potential weapon to render it safe. The LAPD encounters life-threatening dangers every day, the very last thing we need is for officers to have a false sense of safety, thus putting their own lives and lives of those around them at risk. Instead of simply requiring these imitations be painted, we believe a far more effective means of preventing tragedies is to hold people legally responsible for the improper use of these products.”