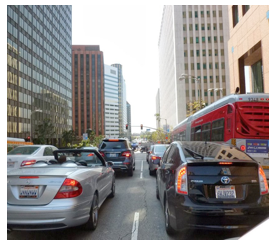 TRANSIT TALK-On Friday I attended a great panel discussion about bicycle mobility on LA's Westside. The event, hosted by the Westside Urban Forum (WUF) explored how the Westside may be poised for a bicycle revolution, stoked by the updating of Metro's Westside Mobility Plan, proposals for miles of bike lanes, bike share in Santa Monica, and the public and planners' growing enthusiasm for cycling's role in reducing congestion, pollution and obesity.

WUF, which bills itself as the premier networking organization dedicated to the land-use dialogue impacting LA's Westside, is just that. And in presenting programs like Shifting Gears: Bicycle Mobility on the Westside, WUF serves an important purpose bringing together business people and government and non-profit leaders with the ability to advance forward looking land-use and planning agendas in a town not always known for being visionary.

Today's panel, moderated by Aaron Paley, the Executive Director of CicLAvia, was among the best programs I have heard at WUF over the years.

Paley began his remarks referencing the LA Times architecture critic Christopher Hawthorne's observation that LA appears to have embarked on a third way, a post-car dominated Los Angeles that is embracing transit, biking and walking as well as human scale transit-oriented development.

I found compelling Paley's comments about the shift from a city focused on speed -- the long-passed reality of going anywhere in LA in 20 minutes -- to the current reality of hyper localization that is spurring neighborhood revitalization and smart development. In sum, since traffic keeps me from getting crosstown to that favorite café or bookshop, I am going to patronize the new neighborhood places that have recognized local demand.

The lively panel discussion explored the challenge of bringing bike lanes to places like Westwood and Beverly Hills and the hurdle of squelching the tyranny of the minority view ("the same five very vocal people") that complete streets and other community improvements do not benefit the greater good.

Panelists Eric Bruins, Planning & Policy Director for the Los Angeles Bicycle Coalition; Laura Cornejo, Deputy Executive Officer for Active Transportation at LA County Metro; Francie Stefan, Strategic Planning & Transportation Manager for the City of Santa Monica and Morgan Whitcomb, Director of Los Angeles Operations for Sam Schwartz Engineering, took turns describing the challenges that remain in realizing change on the particularly contentious Westside, where every camp seems to have its own idea about the role of bike lanes, transit and development.

Laura Cornejo from Metro made a valiant effort to field Paley's question about whether parking is needed at Metro's planned rail stations. Despite the room's obvious skepticism that big parking lots are not needed at key stations, Cornejo parried that it comes down to what kind of community we want, acknowledging that last mile first mile problems remain getting to and from rail stations and bus stops for many Angelenos.

Santa Monica planner Francie Stefan talked about her city's efforts to foster a diversity of transportation options describing the Expo Line and the bike and Big Bus Bus network connections the city is working on. The radical repurposing of Colorado Blvd from 5th Street at the end of the Expo Line to Ocean, complete with 30-foot wide sidewalks will be a welcome development as will improved wayfaring to help direct bikers and pedestrians.

Eric Bruins from the Los Angeles Bicycle Coalition described the challenge of securing community buy in some areas and noted how things seem to be easier in communities like Santa Monica which is a terminus area as opposed to West LA which is a through location. Morgan Whitcomb who recently relocated to Los Angeles from Chicago amused the audience noting how Chicago decided to forgo a feasibility study or its bike share program because... it's feasible.

"We are a large city, we have the grid, money for the program, so it was more of a design build model" there that has brought some 3,000 bikes to the Windy City while Los Angeles is still studying the idea.

According to Laura Cornejo, Metro hopes to launch 1,000 bikes in downtown LA by Spring 2016. Perhaps we could learn a thing or two from Chicago, beginning with the fact that, it's feasible.

And don't forget CicLAvia The Valley from 9 am to 4 pm on Sunday, March 22nd.

(Joel Epstein is an L.A.-based strategic communications consultant focused on transportation, development and other urban policy issues and a contributor to CityWatch. For more about Joel visit: blisslawyers.com or JoelEpstein.com.)