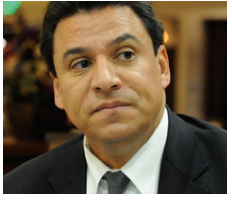 ELECTION WATCH-Recently my friend Jack Humphreville wrote an important article in CityWatch about termed-out Tom LaBonge's refusal to disclose to taxpayers what he's done with millions of dollars of our money in 'his' Council District 4 "Discretionary Accounts".

It is unlikely that Mr. LaBonge, a glad-handing, smiling 'hi how are 'ya' kind of guy (until you look into those dead eyes), will respond.  After all, he's termed out, so why should he care what we think now?

Proving Jack's point, MayorSam blogger Scott Johnson has found the 'smoking gun' of discretionary fund abuse in one of embattled Councilman Jose Huizar's discretionary funds. In this case, the fund in question is called CLARTS, which stands for Central Los Angeles Refuge Transfer Station, and it essentially siphons off city funds from that Station's fees into an "amenities fund" controlled by the Council office.  Huizar can then quietly move portions of this money into his Discretionary Account, and then use it as a personal slush fund to repay political favors.

Johnson's revelations are of personal interest to me, since back in the day when Mr. Huizar was running for re-election, this fund was the subject of much controversy at a number of El Sereno Neighborhood Council meetings.  A community activist and really nice guy named Carlos Morales had filed a public records request for information on the CLARTS fund, and was rewarded for his efforts by being treated really really badly by the Council office.  Watching these machinations and their equivalents in Lincoln Heights & Boyle Heights were a large part of my personal journey into community activism -- and not pleasant to watch.

Further, I got to see Huizar's Chief of Staff, Ana Cubas, lie through her teeth at the Neighborhood Council meetings as she stonewalled the community and blew off the public records requests.  I say lie because it is preposterous to think that the Councilman's  very own Chief of Staff would know nothing about how he moved money around & took care of 'friends'. Ms. Cubas, some may remember, was later rewarded for her efforts  as she miraculously carpetbagged her way into Jan Perry's CD 9 in an unsuccessful bid to add another safe (as in Huizar controlled) Latino into what had been historically an African-American District.  Fortunately, it didn't work.

What is really sad is that it may be too late to do anything about these revelations.  In the case of Tom LaBonge, he could care less, being termed out and really really good at blowing people off.  In the case of Jose Huizar, even though he's running for re-election against a field of four other candidates, this is LA City, where mail balloting is already underway.  If history is a guide, that means that over 42% of the votes will already be in before the March 3 actual voting date.  And if Councilman Huizar gets 50% plus 1 of the vote, that's all folks, he's in with no need to explain himself.

By the way, the other candidates are Gloria Molina (termed out of the LA County Board of Supervisors), Nadine Momoyo Diaz (Boyle Heights resident & formerly on the Adalante East LA CRA Committee), John O'Neill (political consultant), and Mario Chavez (union organizer/community activist).  Having this large a field at least makes it possible that there will not be a winner in the primary election, which I truly believe would be a good thing for our communities.

So back to Jack's point – the real question here has to do with the morals and ethics of our City Council, already the highest paid in the nation, and what they do with our taxpayer money.

I'm not a lawyer, so taking taxpayer money, hiding it in slush funds to repay your buddies, juggling it through indecipherable accounts, and refusing to disclose the details to the taxpayers may be legal.  Heck, I assume our shining new City Attorney folks are quietly helping advise the Council offices on how to blow us off under the California Public Records Act.

At the end of the day all of that simply ducks the real point – when the use of taxpayer money doesn't pass the smell test, and elected officials hide what they did with the money, there's a reason.

(Tony Butka is an Eastside community activist, who has served on a neighborhood council, has a background in government and is an occasional contributor to CityWatch.)