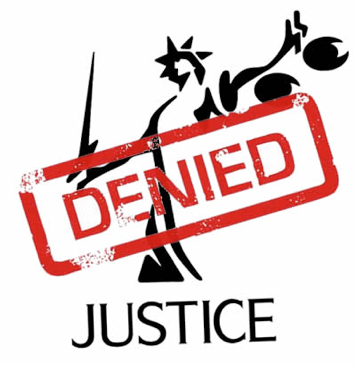 Most people will yawn and say, “So what’s new?”

Here is what is new.  The federal court broke from the historic pattern of cover-ups of “errant attorneys.”  The federal court zeroed in on the California court system itself as the culprit and the Feds shook off the old bromide that there were only a few rotten apples.

People should read the LA Times article and watch the video, especially the second part, to see how truly upset the federal court is at the corruption in the California state courts.

The public holds fast to the Santa Claus type myth that the courts are fair.  When we look at a few California cases, however, we see that the California Supreme Court encourages white collar crime, protects insurance companies who forced their clients to commit perjury and sees no need for fairness or justice in the judicial system.  An example: Foley v. Interactive Data Corp. (1988), 47 Cal. 3d 654:

Foley had expressly told Interactive that it was crucial for the company not to have any hint of white collar crime.  The court repeated Foley’s belief. “Because defendant and its parent do business with the financial community on a confidential basis, the company would have a legitimate interest in knowing about a high executive's alleged prior criminal conduct.”  Foley at 664.

People familiar with corporate corruption in the 1980's believe that the executives hired Kuhne because he was an embezzler.  It was “everyone else is getting rich doing it, why not us” mentality.  Thus, it was imperative to get rid of Mr. Foley.

Readers should Google “William K. Black” to learn about Accounting Control Fraud which allows executives to loot their own companies to the point of bankruptcy.

Foley had been correct about Kuhne’s criminality as Kuhne later pled guilty to financial crimes.

Foley sued Interactive data for wrongful termination.  California law prevented employers from firing employees who were protecting an important public policy. Until The Foley Case, reasonable people thought that preventing criminals from looting corporate treasuries was good public policy.  Embezzlement not only harms the individual company, but when it is widespread, it harms the general public who are dependent on the financial institution.

The California Supreme Court found no public policy in preventing embezzlement. In fact, the insiders thieves could fire anyone who might stand in their way.  An employee’s choice were limited: (1) he could join the conspiracy in order to participate in the ill-gotten gains or (2) he could find another job, but the California Supreme Court would not tolerate an employee’s trying to protect the corporation from insider criminal activity.

What type of criminal mind set must exist in a Supreme Court to hold that the widespread devastations of hundreds of thousands of families throughout the nation due to financial crimes did not involve any public policy?  Why does the Supreme Court still hold that view?

People should remember that in 1988, California was home base for much of the Savings and Loans scandals [S&L Scandals]. Starting in the mid-1980s, the S&L Scandals caused 1,043 out of the 3,234 savings and loan associations in the United States to go bankrupt.  In fact, by 1987 the S&L Scandal stretched all the way to Congress with what is known as the Keating Five, when five US Senators stopped a federal investigation of Charles Keating and his California based Lincoln Savings.  Lincoln Savings final collapse in 1989 cost the federal government $3 billion and many investors lost their life savings.

The Foley Case became integral to the judicial atmosphere which saw no to prevent multi-billion dollar frauds in the financial community.  Foley was fired in March 1983, and since then his legal case had been working its way up the California court’s hierarchy from trial court to appellate court and finally to the Supreme Court.  At each step, the California Courts found that Interactive Data could fire Foley for warning his supervisors of criminality within the company.

All the financial criminals like California’s Charles Keating must have taken great solace in the courts’ steady protection of corporate criminality as their massive embezzlement frauds brought upon the nation what was to be the nation’s greatest financial scandal until the Crash of 2008.

One should realize that after the California court saw the financial devastation which its Foley Decision had allowed to occur, it did not later retract its decision.  Thus, any employee during the decade long the lead-up to the Crash of 2008 knew he/she could be fired for mentioning the criminal behavior with subprime mortgages.

If people knew the pandemic nature of judicial corruption, things would have to change.  The only way the present regime stays in power is by deceiving people into believing that the courts favor Truth, Justice and the American way.  They do not!  They favor power, especially their own power.  Power tends to corrupt and corruption destroys societies.

(Richard Lee Abrams is a Los Angeles attorney. He can be reached at: [email protected] )