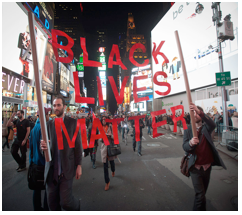 ALPERN AT LARGE-Some folks talk about defending and supporting the value of a life, and others really do it.  This is the story of one man--Detective John Skaggs of the LAPD--who actually did it.  In an era where many so-called "black leaders" or "civil rights leaders" shred and destroy the American history and narrative of civil rights, Detective Skaggs is an inspiration to all of us who recognize the value of a life...including that of a young, black American.

As documented in the Times recently, Jill Leovy's "Ghettoside" focuses on Detective John Skaggs' efforts to never give up on finding the witnesses and proof needed to find the guilty parties who take the lives of young black men in Watts--regardless of the color of the perpetrator.

Because black lives do matter, as the lives of all Americans.  To shrug off a black or Latino or urban or other death as just a part of normal American everyday life is unspeakable and racist, but happens too often in modern-day "enlightened" America...and those who decry this neverending outbreak of deaths are too often called the problem, rather than the ones who are courageous enough to speak up about it.

Ours is an era of bizarre and dangerous word/term conflation--and if "conflation" is a new term to you, then let me clarify--it's where one set of words or terms are arbitrarily changed or altered to mean something else altogether.

Conflation is also a devastating way to shut people up, and to shut people down, in a Politically Correct world that George Orwell accurately predicted in his classic novel "1984".

For example, concerns about Islamic extremists and their supporters in the Islamic world, and how many Western Muslims are either too cowed or secretly supportive of terrorism to speak up against it, is "the same" as being anti-Muslim in general.  Concerns about law-breaking and the economic impacts of "illegal immigration" is the same as being "anti-immigration" as a whole.

Ditto for the concerns about black-on-black violence and the dismissal of too many Americans--many of them openly liberal, and many of them who claim to be pro-civil rights--to the deaths of black Americans.

And if someone states that too many black Americans are dying young, and decry those who are doing it (and who, for the most part, are usually other a criminal element who happens to be black), then these concerns are "conflated" into painting those decrying the deaths as racist.  For example, those who complain about black youths dying at the hands of black gang members, then the complainers are "conflated" as being racist.

With the result of those complaining often being silenced, and made to accept that innocent black Americans who do NOT want to live a life of crime just have to deal with this nightmare as part of doing business in urban America.

Which, of course, doesn't prevent Americans of all bents from seething at the needless and unnecessary deaths of black Americans (for example, the Garner case in New York City, where conservatives and liberals alike wondered why such a use of force was needed for a man selling cigarettes on the street).  Ditto for any racist intimidation or death in the Deep South or anywhere else in this nation.

That said, the Al Sharptons and the Eric Holders of the nation have used the Michael Brown case in Ferguson, Missouri as a way to create a narrative that doesn't exist...and who, on their watch have ignored and left unaddressed the much greater threat to black human lives because it was politically expedient and not economically profitable to do so.

While officer Darren Wilson resigns from the Ferguson police department, and is in fear for his life after being smeared and destroyed in a McCarthy-type movement by Attorney General Eric Holder (arguably the most dangerous man who has ever held that post) and race-baiter/extortionist extraordinaire Al Sharpton (who, for some reason, is allowed to regularly visit the White House despite owing millions in back taxes), even though no civil rights charges will be brought against him...

...Detective John Skaggs, as detailed in Jill Leovy's "Ghettoside" doggedly pursues witnesses, frightened and intimidated as they are, to find the killers of victimized families in Watts and chooses not to be "promoted" to other regions of Los Angeles because he fights for the rights of the deceased and their families in this community to have their killers see justice.

Whether it's getting witnesses to testify (must we use the word "snitch" to describe these courageous individuals willing to testify against killers?), not letting cold cases be forgotten, Skaggs' example shows us all that all lives, even urban black lives, do matter.  It shouldn't make a difference, but Detective Skaggs happens to be white.

Street justice and revenge killings have no merit in a civilized society, but will inevitably be sought if the police allow it to happen, and if enough Americans shrug their shoulders when "just another young black guy in the ghetto" gets killed.

Whether it's a black youth being killed by another black youth, or by someone of another race, this person could have been the next entrepreneur, teacher, physician or even President, and it's NEVER to be dismissed or taken for granted.

South Los Angeles has seen a remarkable drop in murders and violent crimes since the Bloods/Crips heyday, and it is brave and valiant individuals like LAPD Detective John Skaggs who keep it down.

It is the likes of Detective Skaggs who continue to pursue the moral high ground that a life wasted, including an urban black life, is one that is of unspeakable horror--and must be fought with justice and the incarceration of any who would commit this murder.

If only the distraction surrounding the Ferguson, Missouri incident at the hands of Holder and Sharpton, and the acceptance of a young, black death count in a "liberal, pro-civil rights" city such as Chicago, would recognize the value of an innocent black life (rather than glorify someone who was a thug and a threat to other black youths), our nation really would be able to coalesce around the understanding that black lives really DO matter.

Fortunately, we have American heroes like Detective John Skaggs to remind us that we are all one country, and one culture, and one civilization in the United States--and that every young, black, urban life taken is a crime that must remain prioritized for justice at all costs.

(Ken Alpern is a Westside Village Zone Director and Board member of the Mar Vista Community Council (MVCC), previously co-chaired its Planning and Outreach Committees, and currently is Co-Chair of its MVCC Transportation/Infrastructure Committee. He is co-chair of the CD11Transportation Advisory Committee and chairs the nonprofit Transit Coalition, and can be reached at Alpern@MarVista.org  He also does regular commentary on the MarkIsler Radio Show on AM 870, and co-chairs the grassroots Friends of the Green Line at www.fogl.us. The views expressed in this article are solely those of Mr. Alpern.)