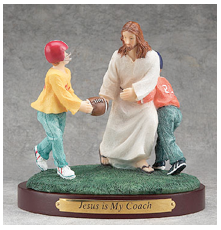 THE SUPER BOWL FROM WHERE GOD SITS- Shortly after Seattle Seahawks star quarterback Russell Wilson led his team to an overtime victory against the Green Bay Packers last week, he tearfully commented to a TV reporter that God had prepared his team for the come-from-behind victory. “God is too good all the time, man,” he offered.

Predictably, snarky football pundits jumped on Wilson’s comments, essentially asking why God had not prepared the Packers equally well for such a crucial game. The Packers went home while Seattle advanced to this Sunday’s Super Bowl. The Green Bay quarterback Aaron Rodgers later joked in a radio interview that he didn’t think God was a big football fan.

Rodgers made the obvious and necessary point. But there is a much more serious and historically significant theological objection to the conceit that God intervenes in our lives to our benefit and that his intentions are always benign, helpful and compassionate. Less “joyful” and even “pessimistic” religious thinkers have made demanding claims on our behavior while at the same time offering a more realistic view of life and our relationship to God, that has sustained people during political struggles.

Rabbi Abraham J. Heschel, a staunch civil rights activist, pointed out that the individual chosen to express God’s wrath with society was bound to alienate almost everyone – priests and princes – cynics as well as believers. The prophet feels the “blast from heaven” as a burden on his soul, while chastising a community that turned its back on the Lord while worshiping earthly power and wealth.

Jeremiah, who Heschel calls the “wrathful” prophet, condemned those who “worshiped the works of their own hands,” the human built institutions that had fallen into corruption. In such a situation, God’s compassion could not be assured.

This recognition of man’s fallen state and the inevitable decline of the institutions he builds – including churches – is a common motif of theologians. St. Augustine, whose impact on Western Christianity has been profound, counterposed the City of God with the earthly cities and institutions constructed and run by man. The earthly city, he preached and wrote, worships itself while the heavenly city “glories in the Lord.”

If optimism is the facile belief that God is on your team and that history is moving inexorably forward, then the more restrained language of hope draws from a deeper recognition that while there is no earthly guarantee that God is listening, life and its inevitable struggles must continue regardless.

It was in the American civil rights movement where the distinction between optimism and hope was starkly demonstrated. In his influential book, A Stone of Hope, historian David Chappell argues that Martin Luther King Jr. and leading activists were steeped in a “prophetic tradition” that offered a way of critiquing a nation in moral decline but also provided theological protection against a naive belief that Southern racists could simply be “persuaded” to surrender their prejudices and powers.

King, who wrote one of his first essays on Jeremiah and referred to him approvingly as a “rebel,” acknowledged his own “prophetic pessimism about man.” That pessimism about human nature, Chappell writes, made King “…skeptical of voluntary, liberal progress” and led him early in his career to adopt nonviolent but “coercive strategies” in a war for political power.

King studied theologian Reinhold Niebuhr closely and embraced his view that collective egoism and the power of self-interest were an entrenched part of the human condition and could not be “educated” away. While King and activists like Fannie Lou Hamer surely believed that a just God was “on their side,” they also understood that smart tactics, an organized black community and timely federal help where also crucial to success. Organizing was tedious and dangerous. Hamer felt God’s presence in her work, but she also kept a shotgun in her bedroom.

So my plea for all the players who pray before Sunday’s game is that they kneel in request for divine intervention for the safety of all the players rather than for their own victory or glory. I suspect that in this game, if past games are any indication, more important than prayer will be the talent on the field and a little bit of luck.

(Kelly Candaele has produced a number of documentaries about sports and politics including A League of Their Own, about his mother’s years as a professional baseball player. This perspective was posted first at CapitalandMain.com)