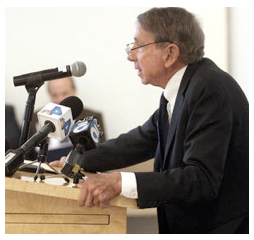 LA WATCHDOG-In the blink of an eye on Tuesday, January 20, our less than transparent City Council referred only six of the recommendations of Mickey Kantor’s LA 2020 Commission (photo) to various Council Committees for “further consideration” without a peep from any of our Elected Elite.  This action was based on a seventeen minute discussion at the Rules, Election, and Intergovernmental Relations Committee on September 26 between City Council President Herb Wesson and Tom LaBonge.  Councilman Jose Huizar was missing in action.

Unfortunately, four key recommendations that were endorsed unanimously by the LA 2020 Commission were ignored by the Rules Committee and the City Council.

These include the creation of an “Office of Transparency and Accountability” to oversee the City’s finances and the efficiency (or more likely, the inefficiency) of the City operations and its management.

As we all know, the City could use a little help as its finances are a mess.  It is facing a $165 million deficit next year and has accrued more than $25 billion of long term liabilities, consisting of outstanding debt, unfunded pension liabilities, and deferred maintenance on streets, sidewalks, and the rest of our infrastructure.

The City Council failed to consider the recommendation to establish a “Commission on Retirement Security” that would make “concrete recommendations on how to achieve equilibrium on retirement costs by 2020.”

The Members ducked consideration of the overly optimistic investment rate assumption used by the City’s two pension plans because its unwillingness to face reality.

Herb and the gang ignored the recommendation to establish an independent, professionally staffed Los Angeles Utility Rate Commission that would appoint the General Manager and set rates for our Department of Water and Power.  Even Union Bo$$ d’Arcy endorsed this recommendation.

At the Sherman Oaks Homeowners Association’s standing room only debate on Wednesday night, the candidates hoping to succeed the termed out Tom LaBonge agreed that the City Council should consider all of the recommendations by the LA 2020 Commission, especially those that related to the City’s finances, pensions, and generous compensation arrangements.

This raises the interesting question of why Jose Huizar, an incumbent who is in a competitive race with the fiscally prudent Gloria Molina, has not endorsed greater transparency and accountability.  Yet his failure to do so is a result of his allegiance to Council President Herb Wesson and their unwillingness to consider real reform of the City’s finances and pensions.

Huizar was a strong proponent of Proposition A, the proposed half cent increase in our sales tax that was rejected by the voters despite threats to downsize the Police Department that were broadcast throughout the City by Wesson’s multimillion slush fund.  Surprisingly, almost half of the voters in his Council District were opposed to this increase in our sales tax to to a mind boggling 9½%.

He was also a supporter of the proposed $4 billion Street and Sidewalk Tax that was scheduled to be on the November ballot until Mayor Garcetti and the City Council realized that the voters would once again reject a substantial tax increase that was not accompanied by real reform of the City’s finances.

The failure of the City Council to consider all of the recommendations of the LA 2020 Commission should be considered a litmus test for all candidates, including the incumbents, Paul Krekorian, Nury Martinez, Herb Wesson, Mitch Englander (even though he is running unopposed), and Jose Huizar.

We also need the Energy and Environment Committee chaired by Felipe Fuentes to consider the recommendations regarding DWP.  Likewise, the Budget & Finance Committee chaired by Paul Krekorian should review the establishment of an Office of Transparency and Accountability and the two recommendations regarding the City’s seriously underfunded pension plans.

The City Council needs to begin the long process of earning the trust, confidence, and respect of the voters, starting with considering and implementing the recommendations of the LA 2020 Commission that reform the City’s precarious finances and underfunded pensions.

Otherwise, when it comes time to increase our taxes, the voters will give Herb and his gang their own bum’s rush.