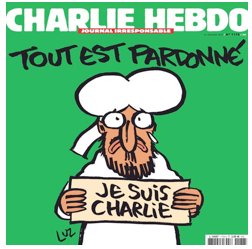 SATIRE POLITICS-Last week's murderous radical Islamist terrorist attacks in Paris, centering on the Charlie Hebdo satirical magazine, were an utter outrage to humanity. The perpetrators and other conspirators deserve the most aggressive and terminal responses available.

Sunday's gigantic rally in Paris, proceeding down Boulevard Voltaire -- named for the French philosophe, a satirist himself and sometime exile who was one of the brightest lights of the Enlightenment -- was a powerful affirmation of the freedom of expression at the core of true civilization.

Yet there is a problem with "Je suis Charlie."

While I support the right of the journalists involved to express their evident contempt for the religion of Islam, I also support my right to express my disdain for the acts that precipitated their murders.

The reality is that I could go into any city in America tomorrow and, if I chose to, get myself assaulted. Especially if I exercised my right to free expression about, say, supposed laziness and loud ethnic music.

Thus I could be victim, bully, aggrieved citizen, or any combination thereof. Perhaps even a reckless jerk.

Recent history, including at Charlie Hebdo itself, already told us that radical Islamists will commit bizarre acts of retaliation in response to very rude depictions of their religion. There is nothing fundamentally new in the latest outrage. It is simply more dramatic, on a bigger scale.

Our reverence for freedom of expression, hardly shared by all jumping on to the "Je suis Charlie" bandwagon, can be manipulated into furthering a permanent state of war. Like the Crusades. For giving in to radical Islamist intimidation is not the only path back to the Dark Ages which the Renaissance and the Enlightenment lifted us out out of.

The boors and provocateurs among us should be no more decisive that the barbarians amidst Islam. Whose leaders, not at all incidentally, must impress upon their adherents the need to respect the ways of the West if they are to live here.

It seems more than a little bizarre to this rather devout Zen agnostic of Judeo-Christian heritage that religion is still compelling wars and ongoing spates of violence in the very advanced-sounding year of 2015. But we have three major religions with reportedly divinely-inspired claims to one one very small patch of the planet.

In all the tumult, the lesson of Copernicus is lost. The sun does not revolve around the Earth; the reverse is true. In a vast universe filled with more stars and planets than we can imagine. Yet some of us imagine that they have ultimate answers to all of Creation, thus empowering them to exert their will over others.

Clearly, more humility is called for if we are to find a way to live together on this already imperiled planet.