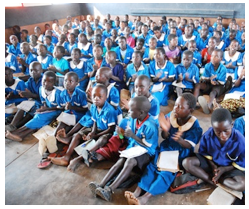 JUST SAYIN’-I don’t think I have ever asked you to donate to any particular charity.  I suppose one reason is because there are so many worthy ones.

After all the holidays and festivities, I understand that the last thing on your minds is making another donation.  Nevertheless, I don’t believe it is untimely to consider a different kind of donation, one that does so much for others and one that can be offered in honor of or in tribute to another, one that can be done once or numerous times a year.

The “kind” of donation I have in mind is KIND—Kids in Need of Desks.  The idea was conceived by Lawrence O’Donnell, the moderator of his own MSNBC program, The Last Word.  For this project, he works in conjunction with UNICEF, an organization that does so much worldwide.

A while back, O’Donnell had the opportunity to travel to Malawi, an infrequent vacation spot in Africa for most travelers.  People at The Grio had recommended that he take a look to observe first-hand what the conditions are like there.

His first stop in Malawi was at Chimwala Primary School in Lilongwe, a city in the center of the country.  The school serves at least 3000 students who have to attend in shifts due to their great numbers.  What he witnessed right away was how all the students sit on the floor inside their classrooms or outside on the ground while their teachers must stand for at least seven hours a day as well.

During the early part of his professional life, he was a teacher (once a teacher, always a teacher).  Thus, for him there was a natural empathy and kinship with the teachers and the students with whom he came into such close contact.  We certainly need more instructors like him, but we can also be grateful for just how much he has been able to accomplish and how many more people he has been able to reach as a television commentator and activist.

He met with instructors and interacted with students who stole his heart.  He immediately committed himself to helping them.  Getting students off the floor “helps lay the groundwork for survival and success that will continue for generations,” stated Caryl Stern, O’Donnell’s connection with UNICEF.  Ultimately, 172 schools in numerous districts will be beneficiaries of the KIND program.

In fact, during his initial visit, he was able to locate local carpenters who could hire local laborers to furnish the first classroom with desks that seat 2-3 students at a time (as a consequence, this program has become a veritable economic boost to the community because of the ongoing jobs it has created).  In just one week (in partnership with UNICEF for initial funding), those students were forever off the floor and sitting at eye-level with their teacher—no longer having to sit on hard floors or stretch their necks awkwardly to look at their teachers, now able to have a desk top on which to place and use their materials.

As of 2014, KIND has raised more than $8 million through our donations and has supplied perhaps 100,000 desks, but still these numbers are far short of all the desks required to fulfill the mission of a desk for every child to use (80% of students are still sitting on the ground).

During a child’s formative years, education in Malawi is free, but middle and high schools are costly—considering tuition, supplies, uniforms, transportation, food and board, and so forth.  Because of this, since money is so scarce, those families that can afford only one tuition will likely not spend it on a daughter, particularly if a son can benefit from the educational experience.

O’Donnell recognized the additional need that that kind of bias generates, and thus again through the partnership between MSNBC and UNICEF, a new program was formed:  Scholarships for Girls in Malawi.  It becomes increasingly clear that an education for girls is a “passport to a brighter future. . . .  Girls. . .are less likely to be exploited, less likely to fall victim to trafficking, less likely to be infected with HIV, and less likely to die during pregnancy.”

Currently, only 7% of Malawian girls have the opportunity to finish their education.  However, should they be offered that opportunity, their education will make them more independent and will help them to live a healthier and longer life.

Another significant outcome for these females is how their education can break the cycle that would otherwise lead inexorably and inescapably to misery and death.  Furthermore, children of educated women will start out life with a much better chance of becoming successful adults. . . .

While I have your attention, there is a local project that is also worthy of our attention.  The United Methodist Church in Pacoima has initiated a program called Blanketing the Southland.

During the typical winter in the San Fernando Valley, temperatures drop to an average of 41° F at nighttime.  Just think of how much colder this winter has been, consider the wind chill factor as well, and then consider the many people trying to survive under those conditions.

The program, also dependent on donations, helps provide military-grade blankets to homeless men, women and children—often the difference between life and death, literally!  I cannot get the image (of what I once witnessed) out of my mind of the several homeless people who had frozen to death beneath a freeway over-ramp near our downtown LA Live—glamor and excitement for the lucky juxtaposed to the dismal and desperate who had been robbed of a chance for survival.

Yes, there are a wide variety of needs.  Some charities are more capable and likely of drawing most of the monies they need.  Others are desperate for help, just as their beneficiaries are.  Selecting which charities to help presents a genuine conundrum for most of us.  Yet each of us can do something in our own way about helping the beleaguered around us.

In fact, there is an abundance of ways to help, offering many approaches, some of which are far more than monetary donations alone.  Contributions in kind or in volunteer hours are equally indispensable for all those in need and for the organizations that have been set up to help the destitute.

Take a look at the information below for ways you can get involved.

After all, we’re not islands!

attn:  KIND and/or Be K.I.N.D. to a Girl In Malawi:  Provide a Scholarship

(Rosemary Jenkins is a Democratic activist and chair of the Northeast Valley Green Alliance. Jenkins has written A Quick-and=Easy Reference to Correct Grammar and Composition, Leticia in Her Wedding Dress and Other Poems, and Vignettes for Understanding Literary and Related Concepts.  She also writes for CityWatch.)