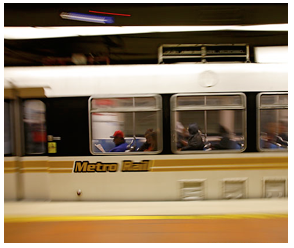 GETTING THERE FROM HERE IN LA-Last week the Southwest Corridor, representing the South Bay and Westside cities, selected the sub-region's Metro Board representative for the next four years.

Mayor James Butts of Inglewood overwhelmingly defeated incumbent, Santa Monica council member Pam O'Connor, who had served on the Metro Board for 13 years without ever having been previously challenged.

While not exactly the stuff of headlines, this was a potentially very meaningful development. Transit is an extremely important matter for our County and collaboration and compromise are very important in moving the transit agenda forward for the entire region. The selection of Mayor Butts is a first but very important step in removing some of the intraregional wedges which have hindered joint transit efforts in the past. His selection can serve as a catalyst in turning Metro into a more transparent, responsive and effective agency which does a significantly better job of serving the transit needs of a broad cross-section of communities.

The Metro Board sometimes seems like an echo chamber; it is a problem when Metro Board representatives seem to have lost touch with the very residents they are supposed to represent. One of Pam O'Connor's most recent proposals, for example, was to christen subway stations after her fellow Metro Board members, career politicians Zev Yaroslavsky and Gloria Molina, despite Metro's long-standing policy of not naming stations after living people.

With all due respect for the public service of career politicians, naming subway stations after living politicians and Metro Board members is a perfectly dreadful idea. In fact, the only possible exception to the policy of not naming stations after living people is Vin Scully. Yes, Vin Scully. That's it. And he's such a mensch that you'd probably have to work hard to convince him to even allow Metro to name anything after him. Career politicians come and go, but there is -- and only ever will be -- but one Vin Scully.

Yet it wasn't merely Pam O'Connor's lack of judgment when it comes to station-naming conventions which made the change of representation so compelling. As a number of colleagues from other cities remarked to me, Pam O'Connor seemed to be most dedicated to representing Metro's central bureaucracy rather than the sub-region. James Butts has made it clear that he has no personal agendas other than to represent the cities that selected him. He understands the frustration that a number of cities have experienced when an arrogant agency doesn't feel it has to listen to the very communities it is supposed to serve.

A large part of this arrogance is the direct result of structural governance problems on the Metro Board, under which the smaller cities in the County - i.e. the 87 cities in the County which are not the City of Los Angeles - are systemically underrepresented. The math is fairly simple: in a County which numbers over 10 million residents, the City of Los Angeles with only 38% of the overall County population has 4 Metro Board seats, while the other 87 cities collectively have 4 Metro Board seats.

Each of the five county supervisors is also on the Metro Board, but they represent all 10 million residents of the entire County, including the City of Los Angeles, the other 87 cities and the unincorporated areas.

This underrepresentation on the Metro Board of a majority of the residents in the County is a structural, pre-existing wedge between the City of Los Angeles, which is overrepresented on the Metro Board, and the rest of the County, which is underrepresented. This has led to no small amount of frustration throughout the County and instilled the feeling that many communities are not getting their fair share of transit infrastructure or service. Our sub-region - and, indeed, the entire County -- deserves a representative who is willing to work from within to try to fix this problem. Working towards a solution is not only important in ensuring that Metro's resources are allocated on an equitable basis, but also in support of the organization's long-term viability. The much maligned principles of basic fairness serve all of us in the region well.

Unfortunately, Pam O'Connor felt that naming stations after fellow Metro Board members was more important than working towards true, proportional representation and remained vocally uncommitted to do anything about our collective disenfranchisement on the Metro Board.

There are a number of potential solutions to the problem of disproportionate representation. Perhaps the simplest and most equitable would be to add two seats to the Metro Board to represent areas outside of the city of LA. The math is compellingly simple: one Metro Board member would represent approximately 1 million residents; LA would maintain its 4 Board members and the rest of the County would be represented by 6 Board members.

While I understand that the City of Los Angeles might initially be reluctant to dilute its own influence on the Metro Board, the principles of "one person, one vote" are entrenched at the core of our democracy and cannot be ignored. Mayor Garcetti has worked towards better regional co-operation among all the cities in the County, correctly acknowledging that past administrations in Los Angeles have been slow to recognize the value of working with, rather than against, the other cities in the County. In committing to make sure that LA doesn't act like the proverbial 800 lb. gorilla, Mayor Garcetti is on the right track towards achieving regional cooperation which benefits the entire County and region, not just parts of it.

However, true and effective regional co-operation can only occur if everyone in the County has a voice and if the principles of local control are respected. This is not the antebellum South and fractional representation has never worked particularly well in this country. To this end, proportional representation on the Metro Board would also ultimately benefit the City of Los Angeles because it would remove the specter of the 800 lb. gorilla and ensure that the 62% of the County's residents who don't live in the City of Los Angeles are treated like fair and equal transit partners.

The discussion of a new transit-related sales tax or a sales tax extension makes the issue of fair and proportional representation for all the residents of LA County on the Metro Board even more pressing. In 2016 we may be faced with a host of ballot measures, including tax initiatives such as an extension of Prop 30, revisions to Prop 13, an oil extraction tax, a tobacco tax, and more.

If we want to try to make the case to the voters that all of the residents of the County should tax themselves even more in order to invest in transit infrastructure, we need to be able to assure them that when the billions of dollars are spent, they will not only be getting the best possible value for their money, but also their fair share. It's not just about the specific projects, but also about having a strong voice in the ongoing operations of this multi-billion dollar agency.

I worked with a broad but rag-tag coalition of grass roots groups which shocked the Establishment by defeating Measure J in 2012. Measure J, a transit tax extension, was simply a major money grab which would have fed Metro's arrogance without doing anything to increase accountability. It did nothing to address the problem of the disenfranchisement of a majority of the County's residents and it failed to pass despite major backing from special interests and the lack of a well-funded opposition. A new effort at a transit tax will suffer the same fate if Metro's "taxation without (proportional) representation" is not addressed. Armed with this argument and a fresh conviction that "fairness" is not a dirty word, opposition to a new transit tax would be stronger, better organized and even broader the next time around. It doesn't have to be that way.

James Butts has a tremendous opportunity as a new member on the Metro Board and I have the utmost confidence in him. He can be the spark which results in much-needed systemic reform in Metro's governance structure, which truly brings fair and proportional representation to all the residents of LA County. James Butts is not beholden to any clique of political cronies or network of special interests. He has made it clear that he would represent the cities that elected him and not Metro's central bureaucracy. James Butts's selection as our Metro Board representative is good news for the entire region and it will be great to have a Metro Board member who wants to do the right things for the right reasons.

James Butts’ election to the Metro Board gives hope that we can end much of the frustration that has surrounded Metro's decision-making and that we can begin a new era in regional cooperation. It's time to move the County forward in a more equitable, collaborative and unified fashion. It's time for all of our voices to be heard and for all of us to matter.

(John Mirisch serves on the City Council of Beverly Hills. As mayor, he created the Sunshine Task Force to work toward a more open, transparent and participatory local government. John Mirisch is an occasional contributor to CityWatch.)