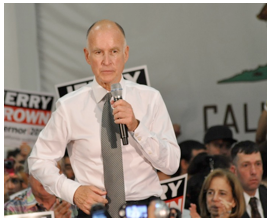 POLITICS-As he contemplates some fights to come in his record-setting fourth term as Governor of California, Jerry Brown finally got the final count on his re-election. Late absentees and provisional ballots boosted Brown more than a full point from his standing the morning after, to 60.0 percent. A stunning result, considering that his campaign never produced an ad or press release advocating his re-election.

Brown ran for governor in classic Zen fashion; by simply being governor. Of course, he did appear in some ads for his two big inititiatives -- the $7.5 billion water bond and the state budget rainy day fund -- which won with more than 67 percent and 69 percent, respectively. But more than 40 percent said in late October polling that they didn't know Brown was running for re-election.

Had he run re-election ads I think he would have gotten into the high 60s, knocking his very vulnerable Republican opponent, former Assistant Treasury Secretary Neel Kashkari, down into the low 30s. But his way was definitely cooler, and had the added bonus of leaving Brown with more than $20 million to play with in unspent campaign funds.

In the end, the two Republicans with the best chance of winning statewide -- Fresno Mayor Ashley Swearengin for controller and Pepperdine policy center head Pete Peterson for secretary of state -- didn't come all that close. Each lost by seven to eight points, raising relatively little money and finding no help from independent expenditures.

In fact, it wasn't much of an election for Republicans, despite the very low turnout. They actually lost a seat in Congress. In the midst of the biggest Republican House showing nationally since before Franklin D. Roosevelt became president!

They did deny Democratic supermajorities in both houses of the state legislature. But that was expected. And given Democratic tendencies to excess and general screwing up when they're really large and in charge, I think that's for the best. Let's not forget that the Dem supermajority in the state Senate had already gone glimmering with no fewer than three senators bounced for various forms of malfeasance in office, two of them involving very serious political corruption charges.

Nor did Republicans come up with anything like a new message for California. The Kashkari campaign was intellectually empty. Aside from the silly homeless stunt and a couple risible TV ads, there was nothing that didn't come out of the generic RNC playbook. Kashkari ran as a bog standard corporate conservative, avoiding irritating Latinos, women, and gays. That must have taken five minutes to figure out.

It's too bad. First, because that will mean that his generation will be the first in American history not to produce a President of the United States. Second, because there is a large opening in the politics of 2016 for a candidate who can go left and right at the same time. It's Brown's misfortune, in the sense that he is seen as too old and is in the midst of a very expansive agenda in California.

There's plenty to point to in Brown's record here for a a Democratic presidential primary electorate. As well as plenty for a general election.

Hillary Clinton? Please. Yawn. She's been very underwhelming in her latest guise as inevitable president. Much more to say another time about her and the flawed field in both parties which is nonetheless going to struggle to beat her. She remains a formidable figure, more so than anyone else in the field.

Fortunately for Brown, this all plays off his expansive programmatic reform agenda in California, which is now in mid-course. Before Brown's fourth inaugural address in early January, I'll address elements of that agenda.

In the meantime, his skirmish with the University of California, which wants not just more state money but a tuition hike, continues. The legislature is responding on Brown's side, with the Assembly speaker introducing legislation which would require zero-based budgeting at UC. That should give some bureaucrats a bit of pause.

University of California President Janet Napolitano -- the ex-Arizona governor and US homeland security secretary -- wants to raise tuition despite getting more money from Brown's big Prop 30 victory in 2012. Brown's against that, but the UC Board of Regents -- reliably captured by the bureaucratic status quo as it has been since I first dealt with it decades ago over South Africa divestment -- voted 14 to 7 against Brown. Despite Brown spending more time with the board than any other governor.

Some UC folks like to claim that excellence -- the university, with Brown and my alma mater Berkeley leading the way, is arguably the world's leading public university. But excellence does not always equate to spending. And spending often equates to excess. Consider that the growth in spending on UC faculty and regular staff has kept pace with enrollment grown in recent decades, while the growth in spending on "management and senior professionals has skyrocketed.

Brown may have another more recent opponent than a not impressive former Obama cabinet member; the Obama Environmental Protection Agency and White House itself. Which is in the process of going along with oil interests that want a rollback of the renewable fuels standard. There are legitimate concerns about ethanol in the Midwest. But more serious renewable fuels are in the works in California's bioscience labs.

Brown should prevail with the UC bureaucracy and its captive board. Unless, that is, Democratic legislators go into default mode and figure they can just spend more money in flush times, which these are.

That will be a big part of Brown's fourth term as governor. Disciplining the Democratic Party and its vast knee-jerk spending interest group apparat to spend smarter and save for the times that are not so good. Its failure to think long term is a big reason why California got into its past chronic budget crisis in the first place.