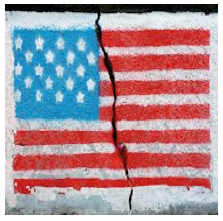 The other archetype is Equality.  Equality is neither an inalienable nor a constitutional right. The word Equality does not appear in the Declaration or the Constitution.  In fact, Equality is hostile to Liberty.  In 1832, de Tocqueville in Democracy in America discussed the destructive nature of Equality.

Liberty is the quintessential American right – the right by which we define ourselves.  We have built upon the Liberty Archetype when describing ourselves and our position among nations. We are the Land of the Brave and Free, not of the Brave and Equal; the song declares, “My country this of thee, sweet land of Liberty,” not of Equality; the President is the leader of the Free World, not of the Equal World.  The now discredited phrase was “Free, White and 21,” not Equal, White and 21.

The fact that we Americans define ourselves by the Liberty Archetype does not excise the Equality Archetype and its destructiveness from society.

“For the principle of Equality begets two tendencies: one leads men straight to independence . . . but the other conducts them by a longer, more secret, but more certain road to servitude.”  Democracy in America, Part II, Book IV, section 52

Thus, the American psyche contains two incompatible archetypes: Liberty which is the fundamental to American identity and has been the basis for the nation and its Constitution, and Equality which in its final analysis destroys Liberty by ending in servitude.

As de Tocqueville also remarked, people, especially the downtrodden, see the immediate favors of Equality which are easily attainable but often cannot perceive the benefits of Liberty which requires prolonged striving.  Whenever the notion of Equality enters into the law, it causes endless mischief due to the danger it holds for the more basic archetype of Liberty.

The Supreme Court has declared in twin cases one-half century apart that the rights of Blacks are based on Equality and not on Liberty.  The logical conclusion is that Blacks are not real Americans. Real Americans have the inalienable and constitution right to Liberty, whereas Blacks only have to be treated equal to Americans.  Maybe an apple is equal to an orange, but an apple is not an organ.

The landmark cases are Plessy v Ferguson (1896) 163 U.S. 537 and Brown v. Board of Education (1954) 347 U.S. 483.  The opinions in both cases denied to Blacks the basic American archetype of Liberty.  This failure of the Supreme Court transcends the fact that Plessy found Separate But Equal okay while the later court found Separate But Equal not okay.  In their basic premises, the two cases were identical – the American archetype of Liberty does not apply to Blacks.  Neither case found that an individual Black person had the freedom not be classified into some group and then provided special liabilities or special rights based upon that classification.

Between Plessy v Ferguson or Brown v The Board of Education, the latter case is the more harmful for individual Blacks, for the judicial system, and for everyone who lives in America.  The evils of Plessy were clear for all to see, but the harm in Brown was hidden.  People rejoiced in the result that segregation was unconstitutional, but ignored that the decision came with a heavy price tag, i.e., Blacks were forever closed out of America’s inner psychological core.

Under Brown, people had to treat Blacks as legally equal to Whites, but they did not have to admit that the Blacks were true Americans.  True Americans are defined by their inalienable rights.  Since discrimination against Blacks does not involved any deprivation of Liberty, they must not be true Americans. That is why we hear charges that Obama is not a true American.

On the plus side for Plessy was Justice Harlan’s dissent which spoke about the inalienable and constitutional right of Liberty and foretold the evils inherent in Equality.

“State enactments regulating the enjoyment of civil rights upon the basis of race, and cunningly devised to defeat legitimate results of the war, under the pretense of recognizing equality of rights, can have no other result than to render permanent peace impossible, and to keep alive a conflict of races, the continuance of which must do harm to all concerned.” Plessy 163 US 537, 560-561 [Endnote #1]

In 1896, Justice Harlan’s dissent brilliantly outlined the Liberty Path for Blacks, and in 1954, all the Supreme Court had to do was adopt Justice Harlan’s dissent.  “the state of Louisiana [Separate But Equal Statute] is inconsistent with the personal liberty of citizens, white and black, in that state, and hostile to both the spirit and letter of the constitution of the United States. Justice Harlan Dissent, Plessy 163 US 537, 563

The rancor and civil discord which we see daily derive from the denial of the Liberty Archetype to Blacks.  Rather they have been relegated to Equality.  There is perhaps no greater evil that to banish an entire segment of the population to the archetype position of permanent outsiders in their own nation.

The depth of the Equality Archetype is reflected in the 1960 book and 1962 movie, To Kill A Mocking Bird.  Tom Robinson, a Black man, faced the death penalty in a 1938 Alabama town due to a false charge of raping a White woman.  In defending Tom Robinson, attorney Atticus Finch, gave a closing argument which has been heralded as one of the greatest speeches in movie history.  The pertinent words are:

“Now, gentlemen, in this country our courts are the great levelers. In our courts, all men are created equal. I'm no idealist to believe firmly in the integrity of our courts and of our jury system. That's no ideal to me. That is a living, working reality!”  Atticus Finch (Gregory Peck), To Kill a Mockingbird, 1962

Atticus Finch, like The Brown Court, denied to Tom Robinson the American inalienable rights to Life and to Liberty.  Finch’s words, “All men are created equal,” come from the Declaration of Independence, but those words could be cut from the Declaration without changing its meaning – the truths which are self-evidence are the inalienable rights to “Life, Liberty and Happiness.” Atticus Finch, a fictional character created in the era of Brown v The Board of Education, never mentioned the inalienable rights of Life or Liberty when defending a man who was facing the death penalty. [Endnote #2]

Because archetypes are embedded deep in the psyche, many people, when they hear the claims of racial discrimination, do not see injustice to individuals but instead, they sense a claim of Group Rights based on the Blacks’ Equality to Whites, and they sense, but cannot articulate, a terrible danger to the nation.

The Equality archetype leads people to ignore the individual person, but rather to look at the group to which he/she belongs.  We start to measure how many Blacks attend a school, how many Blacks work in a business, how many Blacks are promoted to higher positions, etc.  Let’s be clear, if de Tocqueville is correct, the ardent passion for Equality is insatiable even as it leads to servitude.

After Ferguson, we compare the number of Black males who are shot by police to the number of White males killed by police as if it would be OK if the police were killing Whites as fast as they kill Blacks.

Words easily describe the remedy: “Each person, Black, White, Purple etc., is an individual human being and his/her inalienable and constitutional right to Liberty prevents any one from lumping him/her into a category and then attaching liabilities or privileges to that the individuals in that group.”  [Endnote #3] Rectifying the legal problem and admitting that American Blacks are entitled to the inalienable and constitutional right to Liberty looks close to impossible. The loud shouting for Equality leaves no room for Liberty.

Nonetheless, until the roles of the subconscious archetypes of Liberty and Equality are recognized and the injustice of Brown v The Board of Education is rectified, we will continue to be a house divided against itself.

Endnote #1. In 1896, The Plessy Court at least took the time in the majority decision to extensively discuss the Liberty Archetype with respect to Blacks, but by the time of the Brown Court in 1954, the unanimous opinion did not even hint that Liberty applied to Blacks in any fashion.

Endnote #2. Atticus Finch’s closing argument verges on legal malpractice.  He said, “Now, gentlemen, in this country our courts are the great levelers.”  In 1938 Alabama, the attorney asked an all White jury to level the White race down to despised level of the Blacks.  That idea alone would guarantee Tom Robinson’s death.  Such is the power of the Equality Archetype that we mistake great incompetence as heroism.

Endnote #3: The 4th Amendment, “Without due process of law” allows society to convict criminals and place them in jail but the incarceration is based upon the individual after a trial and not his/her membership in some group.

(Richard Lee Abrams is a Hollywood activist and an attorney. He can be reached at: [email protected] )