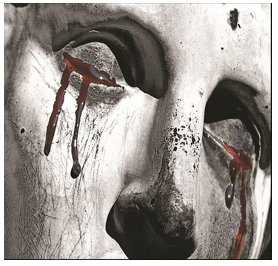 GELFAND’S WORLD-Maybe the truth won't actually set you free. That's one possible interpretation of the play Oedipus Rex, as currently presented by the TE San Pedro Rep company. Then again, perhaps we have to seek out the truth, no matter where it takes us. That's what King Oedipus feels, as he moves inexorably toward his own doom. The one thing we can say for sure about this greatest of ancient Greek plays is that it has multiple themes, some in conflict with each other, and serves as powerful drama. A headstrong king, teased with ambiguous sounding prophecies about his own guilt, is driven by his own personality to get to the truth, no matter the consequences. It makes for blood and song and theatrical suffering that add up to the feeling of catharsis.

Oedipus, as almost everyone knows, is the man who is destined to kill his own father and marry his own mother, not knowing either fact until his painful and tragic realization causes him to destroy his own eyes and give up his crown. The playwright mentions the male desire to wed mom, foreshadowing Sigmund Freud by a couple of thousand years.

The TE San Pedro Rep company has been something of a test case for whether it is possible to build a serious drama company on short money in these theatrically hard times. TE Rep has also been a test case for whether it is possible to do innovative things that work in the dramatic sense. In other words, can they deliver that feeling where the hair on the back of your neck is standing up and there is a catch in the back of your throat? Can they do it on a budget a half dozen decimal points short of what the Metropolitan Opera would spend on its idea of innovation?

It would appear that the answer is yes. TE Rep delivered on its opening presentation of Hamlet, switched gears with its memorable performance of an Americanized version of Shaw's Pygmalion (titled Lovely), and continued with a homebrew version of Tennyson's Lady of Shalott.

Apparently unwilling to take a break from challenging material, this company has taken on Oedipus Rex. It's not an easy task, considering that King Oedipus is among the more challenging roles, and his wife Jacosta brings along challenges of her own. Along the way, the actor portraying Oedipus has to present different looks, beginning with full kingly pomp tempered with a hint of arrogance, then a sense of entitlement that presents itself as demands for the truth from people who would rather not tell it, and ultimately the ability to make a decision to continue demanding the truth, knowing full well that it will lead to his own destruction. It's a role that demands something more than character growth. It's inquiry, then shock and pain, and finally character growth that goes beyond the usual dramatic limits.

The actress playing Jacosta has similar challenges, as she must transition from queenly contentment to denial, then to fear, and finally to full scale despair. What adds to the difficulty is that in the play Oedipus Rex, the worst violence against king and queen takes place offstage and is self inflicted. Thus the players have to set the audience up to accept what happens offstage. The audience is left to deal with what is left of a blind, devastated Oedipus as the play comes to a close.

As in all its previous presentations, the TE Rep company has done things just a little differently. Admittedly this production begins in a traditional way as the priest of Zeus pleads with Oedipus to get to the bottom of a plague which is destroying the city of Thebes. The king's brother in law, Creon, returns from visiting the oracle and announces that the plague can only be lifted if the murderer of the previous king is brought to justice. Oedipus vows to find and punish the guilty party, and his fate is sealed.

The greatness in the play Oedipus Rex involves the tensions between saving oneself and finding truth, between finding justice and keeping the peace, and of course the revelations about all of us that we don't really want to admit.

Along the way, the TE Rep performance takes a little zig-zag where the throne room becomes a modern bar. In fact, the bartender is written into the script and offers drinks to the audience. TE Rep likes to do its intermissions as live acts, where the actors stay in character.

In this performance, they take it a step further. Paris Langle, who made a name for herself as Eliza Doolittle in Lovely, plays a lounge singer complete with sparkly silver dress of daring slit. She sings from the modern repertoire, tying torch song versions of the human condition to that two thousand year old Greek drama. It's not shoved down the audience's throat, it just happens. But we are led to understand that when a singer in Nashville or off Broadway sings about the need for love and the loss of love, we are connected with Sophocles and his cast of characters.

As in previous performances, the TE Rep has mixed talented newcomers with experienced artists. For the character of Creon, the TE Rep company has snagged an old pro, Daryl Keith Roach, who has performed in numerous films, television shows, and even in the American soap opera. As Creon, he represents a man of power who has been unfairly accused of treachery. He doubles as the  palace servant who, at the end, has to reveal to the people that the queen is dead and that the king has put out his own eyes. There are a lot of ways that part might be played. He chooses to play it as a loyal servant overcome by shock and hurt, barely able to choke out the words that he knows he has to say.

For Jacosta, TE Rep found Almarie Guerra, a newcomer who looks properly regal and develops the part as it must be. In conversation after the performance, we discussed how she developed the role, including her moment of realization that she is both the wife and the mother of Oedipus. Unlike Oedipus, she at first tries to hang onto the barest hope that the problem can be made to go away. Just stop asking questions is her opening approach. Her struggles with denial are clear and obvious, but at one point in the action, she has her own deep realization and leaves the stage. And when we are told at the end that she has hanged herself, we are able to believe it.

The actor who played Oedipus seems to be what TE Rep is all about, Mark Kopitzke played a modest role in Lovely (the character Freddy), moved up in the ranks in the Lady of Shalott, and has  been advanced to the title role as Oedipus. Part of his strength is a clear, strong voice. He has something of the look of the Mountie Dudley Do-Right in the Rocky and Bullwinkle cartoon, without the wacky intonation. As a developing actor, he is physically versatile and plays the most dramatic lines in proper dramatic fashion. We can expect him to develop nuance and subtlety in plays which are more requiring of these.

Paris Langle has become not only a mainstay of this company, but is developing as a versatile actress and songstress. She begins as the priest of Zeus crying out over the plague, finishes as a shepherd who delivered the baby Oedipus to a near certain death (which fate spares him of), and in between plays the lounge singer. It would be hard to imagine different personae, yet Langle manages. I think that the audience was particularly taken by her singing role, as it spoke to the modern condition even as it sang directly to the audience. The lounge singer role, as director David Mancini explained, was pure invention on their part, and has been added to the original dialog in order to connect this 2500 year old play to modern humanity, and to continue the TE Rep tradition of developing the intermission space and time with the actors staying in character and, often enough, on the playing surface.

It was hard not to notice that in this time of a plague of our own, here and in West Africa, the play Oedipus Rex begins with a region in thrall to a plague. The company director has a small role at the beginning, as he invites members of the audience entering the theater to "Stick out your tongue," as if he were protecting the city of Thebes from typhus or smallpox. It's a small thing, but in keeping with the immersive theater idea that TE Rep is developing.