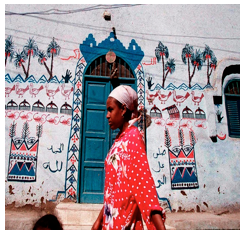 Recently, I attended the opening reception of “Mother Egypt/Golden Nubia: The World of the Nile from the Mediterranean to the Sahara.” This fascinating exhibit, guest curated by Nubian-born art historian Mona Sherif Nelson, features images captured by her husband, Michael Nelson, during the three decades that the couple lived in Cairo.

Michael has worked as a news photographer for the likes of United Press International and Agence France Presse, to name a few. He got started as a photo-journalist back in 1981 - assignment: Lebanon.

I was invited to see this exhibit by my zumba-fueled chum, Suzie, who I met while we were both temping at the City of Beverly Hills. I arrived at the beautiful Sharq Gallery in lush Pacific Palisades at about 3 pm. I was helping myself to a sumptuous Nubian fig when Suze comes bustling towards me with big hugs and ushers me over to meet the stunning Mona Sherif.

As we chat, Mona begins to move around, giving us the skinny on the people and things we’re seeing in the photographs. Next thing I know, most of the visitors are gathered round, eating figs and taking in all the spellbinding information that Mona’s dishing out in animated detail. I would have never known, for example, that the Nubians, as well as folks from upper Egypt, paint their homes with intricate pictures and graphics. Neighbors can tell a lot about the owner by looking at these pictures. They might even be able to tell if they should stop by for a cup of coffee or if the owner would rather not share.

The exhibition coincides with the tenth year anniversary of the Sharq Gallery, a non-profit space operated by Nahid Massoud and Robert Rosenstone, a delightful couple who are just full of miles of extraordinary information about history and culture, not to mention physics. I highly recommend a trip to the Palisades for this treat. It runs through November 16. Find the details below. 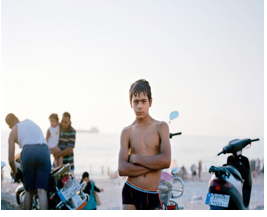 But, that’s not even the half of it. Come to find out, the Palisades exhibit is only part of an unprecedented collaboration of almost thirty cultural institutions who’ve been working for years to present what they’re calling the “LA Islam Arts Initiative.”  This ambitious project isn’t all about religion, folks; but, it is a treasure trove of gems that spark the intellect, touch the heart and dazzle the eye.

Presented by groups from the City of Los Angeles Department of Cultural Affairs and the National Endowment for the Arts, to  the Japanese American Cultural and Community Center and Self Help Graphics, it’s a cross-platform project, consisting of art exhibitions, radio programs, theatrical presentations, films, workshops, symposiums — even hip hop.

The anchoring event is a one-of-a-kind. “Doris Dukes Shangri La:  Architecture, Landscape and Islamic Art” and “Shangri La: Imagined Cities” opened just this past Sunday. The two exhibits are showing side by side at Los Angeles’ own Municipal Art Gallery at Barnsdall Art Park. The organizers have bucked the idea of centering the pieces around a common religious, gender-centric or ideological identity. Instead, curators  Donald Albrecht, Thomas Mellins and Rijin Sahakian  - as well as curators project-wide, have created a juxtaposition of worlds that present the harsh challenges but also the captivating beauty of the Islamic regions of our world and the people who come from those places.

I can’t wait to check out the other events taking place across our vast city through the end of December. The price is right too. Free of charge. Now that, my culture vulture friends, is a deal. Don’t say I didn’t tell ya!

Mother Egypt/Golden Nubia: The World of the Nile from the Mediterranean to the Sahara

Check out the entire program of the LA Islam Arts Initiative, where you’ll find a plethora of informative and aesthetic events:

Make sure you check out the anchoring event - two connected exhibitions:

(Jennifer Caldwell is a an actress and an active member of SAG-AFTRA, serving on several committees. She is a published author of short stories and news articles and is a featured contributor to CityWatch. Her column at www.RecessionCafe.wordpress.com is dishing up good deals, recipes and food for thought. Jennifer can be reached at recessioncafe@yahoo.com. Facebook: http://www.facebook.com/jennifercald - Twitter: @Jennifersdeals)
-cw