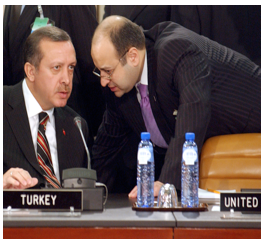 ALPERN AT LARGE-Why any Western nation continues to allow Turkey to remain in NATO is anyone's guess, considering how they have been, and still remain, as lousy an "ally" as any in our war with al-Qaida, ISIS and the other crazies who continue to sink to new barbaric lows in the name of Islam.  However, one can only wonder when Turkish prime minister Erdogan and the rest of Turkey will have their own "ISIS moment".

That moment happened in Saudi Arabia when our other "ally of convenience," the Saudi Royal Family, were so used to allowing al-Qaida to build within its country (so long as they were killing non-Saudis) that when al-Qaida started domestic terrorism that began to consume Saudi Arabia they had no choice but to join with the non-Islamic West to fight the Islamofascism (terror in the name of Islam) and preserve civilization altogether.

That was a sad and avoidable "al-Qaida moment" when Saudi Arabia had to choose to be civilized, but could have prevented that moment years earlier.

Similarly, Pakistan has had a few "Taliban moments," when its willingness to appease and "work with" the Taliban against its rivals in Afghanistan and the West were and are proven fruitless, and only resulting in more domestic terrorism on Pakistani soil.

And--again--one can only wonder when the Turks will have their own "ISIS moment".  They were unhelpful during Operation Desert Storm when Saddam Hussein was taken out, and they still won't allow their bases to be used for the battle against ISIS.

While the rest of the world is having to "man up" and consider having to go back to that strife-ridden world, Turkey has been a curmudgeon and virtually AWOL.  Only the Kurds--and NOT the Turks--have been a reliable, honorable and trustworthy ally in that part of the world against ISIS.

It's therefore heartrending, and with the resulting loss of any understanding or sympathy towards the Turks in its longstanding conflict between the Turkish government and the Kurds, for NATO and the West to witness its refusal to let Syrian Kurds flee the nightmare of Kobane just across the border from Turkey, and to let the overwhelmed Kurds be forced into fighting ISIS on the ground without Turkish support.

It therefore begs the question of why--if Iraq and Syria and Turkey are so unhelpful and unreliable as allies--the U.S. and NATO haven't yet called for the U.N. to recognize a nation of Kurdistan and fill it with the NATO military bases and necessary infrastructure to assist our one new, true and blue ally in that region.

As for Turkey, it is on its way to own "ISIS moment" as greater sympathy towards ISIS grows within Turkish universities and other hotbeds of discontent.  The disaffected always get drawn to the crazy-dangerous movement of the times, and ISIS appears to be that movement du jour.

Turkey will have to choose, just as Egypt did after it had its own "Muslim Brotherhood moment" with the election of former President Morsi, who was thrown out by the people as he led them down the same dangerous path that other Islamic countries like Afghanistan, Pakistan and Iraq have had to confront.

Egypt is now a more needed and loyal ally than ever after Morsi was thrown out, and new President al-Sisi elected as someone who can keep the peace, grow the economy, and provide a bulwark against Hamas to the east and the new Libyan caliphate to the west.

Turkey have to see a change in power to follow Egypt's example and get closer to the West, or will Turkey first choose to get closer with Iran?   That latter nation portends to be an ally against ISIS while duping the West with nuclear talks, and while ramping up its own human rights violations and executions against protestors, including minors.

And with the revelation that American troops DID find chemical Weapons of Mass Destruction (WMD's) in Iraq, but that they weren't new but old and in rusted, corroded condition, the situation becomes even more complicated.

Turkey is decrying the lack of American and Western will to take out Syrian President Assad, who certainly has had, and has recently used, chemical WMD's, but with the other revelation that ISIS probably has captured some of these old, Saddam Hussein-era weapons in Iraq the question of where any of these weapons will be used must be raised.

Will these chemical WMD's, or any other form of terrorism, show up on Turkish soil and lead to the shedding of innocent, civilian Turkish blood?  Will they show up in other nations?

And most importantly, will Turkey and the Erdogan government have to have its own "ISIS moment" before it realizes that it can either be proactive, or reactive, in the ever-expanding war against foreign-sponsored terrorism that must inevitably explode within its borders.

And similarly, will the war-weary citizens of the U.S. and Europe realize that they, too, are more vulnerable and less removed from this nightmarish hell of Islamoterrorism than they would otherwise wish?

(Ken Alpern is a Westside Village Zone Director and Board member of the Mar Vista Community Council (MVCC), previously co-chaired its Planning and Outreach Committees, and currently is Co-Chair of its MVCC Transportation/Infrastructure Committee. He is co-chair of the CD11Transportation Advisory Committee and chairs the nonprofit Transit Coalition, and can be reached at Alpern@MarVista.org. He also does regular commentary on the MarkIsler Radio Show on AM 870, and co-chairs the grassroots Friends of the Green Line at www.fogl.us. The views expressed in this article are solely those of Mr. Alpern.)